The former Peace Corps volunteer has learned the value of pivoting and exploring new interests. 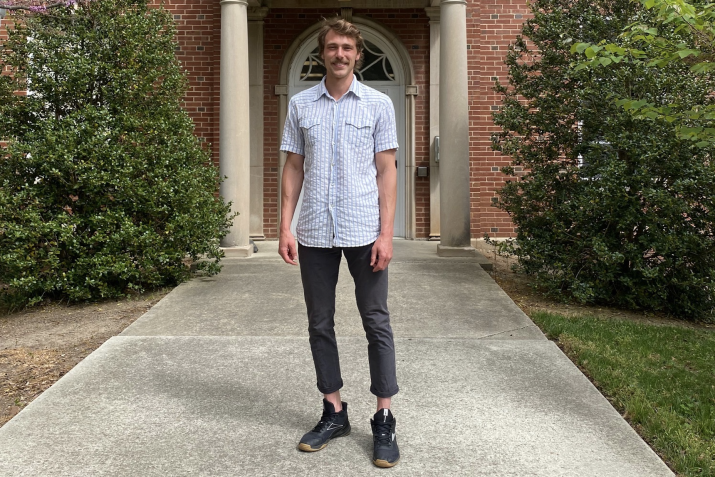 Nathan Ellermeier joined DGHI's Master of Science in Global Health Program in 2020 after his time as a Peace Corps volunteer in Nepal was shortened due to the COVID-19 pandemic, and says his time at Duke expanded his interests in global health.

If there’s one place Nathan Ellermeier didn’t expect to be, it’s at Duke University. The 29-year-old Kansas City, Missouri native graduated from the University of Missouri and thought he’d attend law school. Instead, he fell in love with food and agriculture.

“I like rural communities, food systems and farming, and the only way I would be satisfied in my 20s was to pursue experiences and immerse myself into communities,” he says.

In March 2020, he was in his 21st month of service with the Peace Corps in the Lamjung District, part of the Gandaki Province, in Nepal. He worked with local counterparts, helping improve farming practices and nutrition.

Then, the COVID-19 pandemic emerged globally. Peace Corps evacuated its volunteers. With the world on pause, Ellermeier pondered what to do next.

He applied for graduate school and was accepted into the Duke Global Health Institute’s Master of Science in Global Health program later that year. He was among the first students to pursue its practice-based pathway, which offers an alternative to field-based research. Students intern for six months with a global health organization identified by DGHI and submit and defend an analysis paper from their internship experience.

“Before coming to DGHI, I had developed this skillset rooted in field work in communities, and I wanted a deeper understanding of how research becomes practice within the realm of international development and health initiatives,” Ellermeier explains about his interest in DGHI. “Duke had many opportunities related to my interests.”

Ellermeier broadened those interests as a student. He’s taken classes at Duke’s Nicholas School of the Environment to learn geospatial data analytics and has worked on an exploratory analysis of how dam construction along the Mekong River in Cambodia is affecting health outcomes. Ellermeier’s interests expanded further when he became a teaching assistant for DGHI’s biostatistics core course. His students attended his masters paper defense, which focused on a cluster analysis of Type 2 Diabetes subtypes.

Looking back, Ellermeier says where he is now isn’t what he saw for himself a few years ago. But it makes sense. Working with farms and agriculture encouraged him to learn more about how those areas fit in the realm of global health. He’s also fluent in Nepali and Spanish and for him, the cognitive “muscle” he uses to learn a new language is the same to learn programming.

He says the trajectory of his experiences on his resume are a “physical representation” of the connections he’s made with students and faculty across Duke departments, and the opportunities he was encouraged to pursue in his studies.

“I love seeing the little signs of my future self when I reflect on the past,” he says. “I had envisioned myself as some sort of community organizer working with food systems. As my interest in data analytics has grown, I still see that fitting somewhere. But now, I see that work being part of a larger set of goals.”

Ellermeier hopes to work for a GIS lab or in data analytics while still pursuing work with food systems. Before he leaves DGHI, he does have advice for students taken from his own experience: don’t be afraid to pivot, and let your interests change and expand.

“What’s really been an impactful part of my experience is the mentorship I received from everyone, and the ability to be flexible,” he says. “If you come here with one interest, but you’re inspired by a different subject, you’ll be able to pursue it, and there are faculty that want to help you get there.”

By staying open to new interests, Ellermeier will be leaving with more than just a degree.

He’ll take with him a newfound completeness of mind. He says, “My left and right brains feel like they’ve finally become friends.”