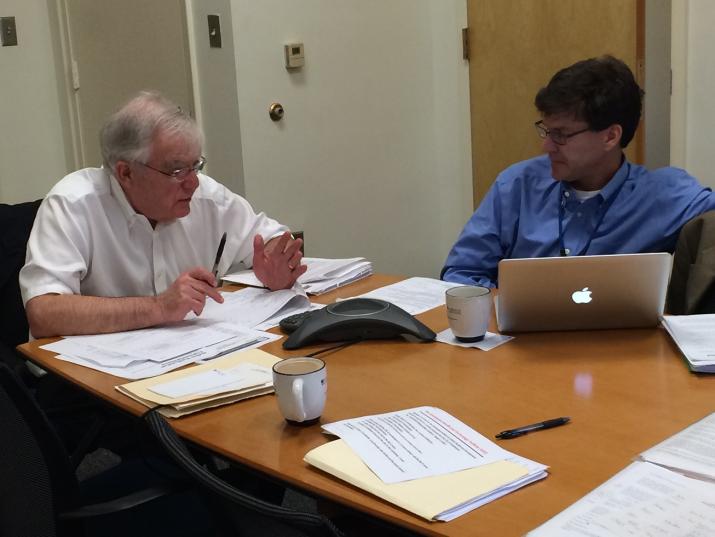 Global health and infectious disease experts Michael Merson and Chris Woods briefed staff from the United States Congress via conference call Thursday on the state of Ebola in the US following the nation’s first confirmed case.

Nearly two dozen congressional staff participated in the conference call briefing, which was facilitated by staff from the Duke Office of Federal Relations from Duke in Washington, Duke University's academic and outreach center in downtown Washington DC.

Merson and Woods gave an overview of the status of the Ebola outbreak in Africa, reviewed how the situation is different in the US as it relates to health system infrastructure, preparedness and response, and clarified common misconceptions about how the disease is spread. Congressional staff on the call followed up with questions about various topics such as vaccine development, the use of US soldiers for response efforts, and airport screening measures.

“We were pleased to have an opportunity to brief Congressional staff on this very urgent and important public health issue. I believe we were able to provide them with some answers and clarification on the current Ebola outbreak and what it means for the US,” said Merson. “The Duke University DC-based office is doing a great service by providing these kinds of opportunities and allowing Duke faculty like ourselves to be a resource to our government.”

“A big part of Duke in Washington and the Office of Federal Relations mission is to help promote our faculty’s wide-ranging expertise to those in DC who can most benefit from hearing directly from expert sources” said Landy Elliott, director of Duke in Washington. "The staffers who participated in the call received reliable, expert background information that went well beyond what they may have heard in initial media reports. And they were able to ask direct questions to help inform the decisions that their bosses may make in response to the Ebola crisis.  It was a perfect example of knowledge in service to society.”

Merson is Director of the Duke Global Health Institute and Wolfgang Joklik Professor of Global Health. He has worked at the CDC and also coordinated the global response to the HIV/AIDS pandemic while at the World Health Organization. Chris Woods is Chief of Infectious Diseases and hospital epidemiologist for the Durham VA Medical Center. He is also a DGHI faculty member and Professor of Medicine, Pathology and Global Health.

On September 30, The Centers for Disease Control confirmed that the first Ebola case in the US was in Dallas, Texas. The male patient had traveled to the US from Liberia on September 19 and was admitted to the hospital on September 28.

Learn more about Ebola and keep up with news by visiting the DGHI Ebola Information and Resources Page.