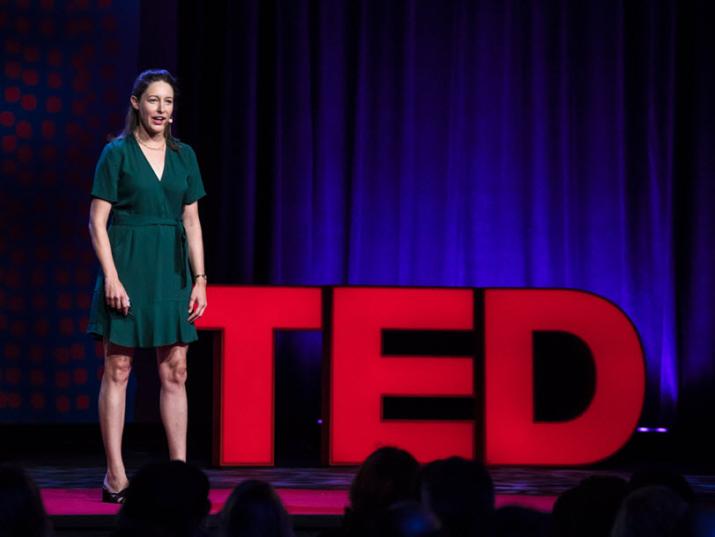 Susan Emmett gave a talk at TED Global in Arusha, Tanzania, in August 2017, as part of the TED Fellows program.

Her TED Talk in Arusha, Tanzania, in August marked the official start to the fellowship—but at that point, Emmett had already spent four months preparing for her TED debut. The return on her investment, she says, was worth it.

The TED Fellows program provides support to a global network of 400 visionaries, from scientists to artists to entrepreneurs, who collaborate across disciplines to create positive change around the world. In addition to participating in a TED or TED Global Conference, fellows receive professional mentoring and public relations coaching and membership in the TED community.

On the TED Global stage, Emmett discussed her research to prevent hearing loss, which affects more than one billion people worldwide—most of whom live in low- and middle-income countries. Emmett has partnered with a tribal health organization in Alaska, the Norton Sound Health Corporation, to merge Alaska’s sophisticated telemedicine system with an inexpensive cell phone-based hearing screening technology developed in South Africa. They’re testing this intervention in a community randomized trial funded by the Patient-Centered Outcomes Research Institute, with the goal of developing a school screening protocol that will reduce childhood hearing loss disparities throughout Alaska.

Following the recent release of her talk, we talked with Emmett about her TED experience, which she describes as “transformative.” Below are some excerpts from our conversation.

DGHI: What was that like to prepare for and deliver the TED Talk?

Susan Emmett: For most fellows, it’s their first time giving a TED Talk, so the TED Fellows program works with you very closely and prepares you well for that experience. The preparation process was challenging and extremely time consuming. There are many, many rounds of revisions. Each of the 21 fellows met individually with a small group of TED staff every few weeks for several months, and we would give our talk in whatever state it was in. In most cases, at least in the beginning, I ended up throwing away my script and starting again. We continued this iterative process until shortly before the conference. They were brutally honest with us, and sometimes it’s hard to hear those criticisms, but at the end of the day that feedback made my talk so much better.

One thing that stood out to me is that the TED staff are masters at teaching people with interesting ideas and diverse backgrounds how to communicate to the public in ways that are engaging and understandable. This is something that I feel, as a whole, the scientific and medical communities aren’t that great at doing. I learned a tremendous amount from the process that I will use in other aspects of my work.

DGHI: What were one or two of your key takeaways when it comes to communicating your science to a lay audience?

Emmett: There was a lot of focus on the language we use. The TED Fellows team pushed us to remove all jargon and any scientific terms that have become engrained in our vocabulary. Sometimes we don’t realize that these terms are not understandable to a general audience.

Another big takeaway for me was appreciating the power of visual imagery. Early on, we were told that we should spend a minimum of 90 hours on our slides—which was shocking to me at the time. The idea is that your visual support is just as important as your words. And there’s a whole science behind how to have those two interact, what that imagery should be, and how to use visuals to support the ideas you’re talking about.

Generally, they recommend not using any words on slides. It really put in perspective how the PowerPoint presentations we develop for scientific talks are not the best way to communicate our ideas. This realization was eye-opening, and it will change the way I approach presentations, no matter who my audience is.

DGHI: Tell us about the images you used in your talk. 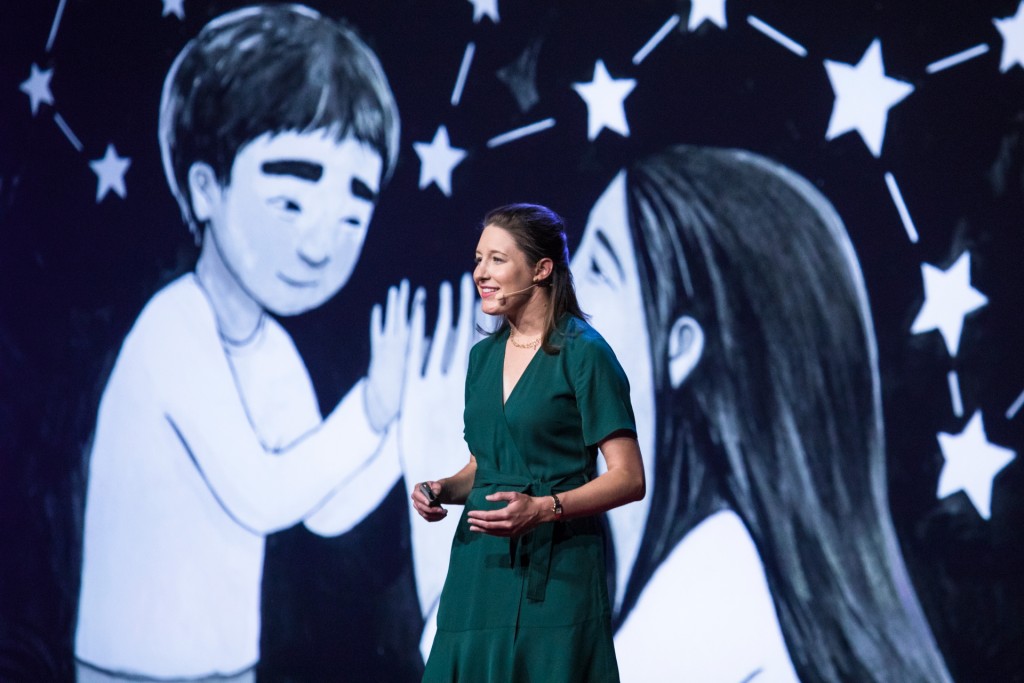 ​Emmett: TED connected me with a professional illustrator, Shannon Kuguenko, who was absolutely fabulous.

My collaboration with Shannon was one of the best and most unique experiences of preparing for TED. I had never collaborated with an artist before, and it was so exciting to see how the talk evolved and how it became that much stronger when the two of us were working together. The richness of the story we were telling increased exponentially as we worked side-by-side to develop imagery that would support the message I wanted to convey.

Shannon’s whimsical, almost magical style really embodied the essence of the Alaska Native culture. A major reason she was able to capture that so nicely is that she’s lived in Alaska, so she understood the world I was talking about in a way that is hard to appreciate if you haven’t spent time there.

DGHI: What has the fellowship taught you so far?

Emmett: The fellowship has changed the way I communicate about my work and the scope of the audience I’m trying to reach. We often become focused in our own small scientific community, and TED helps you realize that your impact can be much greater if you think in a more big-picture way. The fellowship has also given me the tools to communicate my work more effectively to journalists and to the general public.

Another big takeaway is seeing the power of collaboration across very disparate disciplines. One of the great things about TED is that it brings together a lot of interesting people from all over the world who are working in many different areas. The energy, enthusiasm, and collaboration that come from putting all of these very different people in a space together is really exciting, and I think it’s where the most innovative ideas come from.

Being a TED Fellow has been a transformative process—I can’t tell you how much I’ve learned. It’s fun to see how the fellowship will continue to have an impact on my work well into the future.