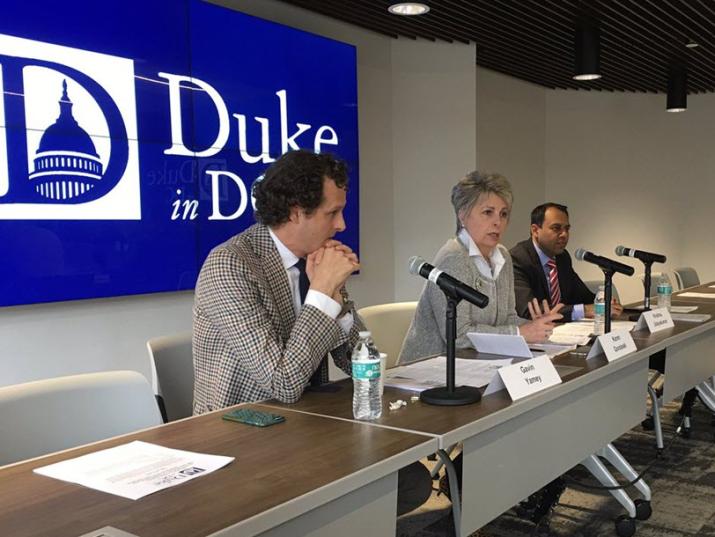 Beyond Talking Points is designed to be a regular series of conversations among experts on a host of current issues relevant to an audience of staff members from congressional member offices and federal agencies. The first event was titled “Global Health Considerations for the New Administration and Congress,” and featured three panels of experts.

Although the U.S. is the largest government funder of global health, said Yamey, this funding has been steadily declining since 2009, with the exception of an injection of funding during the west Africa Ebola outbreak.

Lack of funding is delaying essential products coming to market, he said, describing the findings of a report he co-authored with Duke colleagues, “Strengthening the US Government’s Role in Product Development for Global Health.” The report was funded by GHTC.

In addition to inadequate funding to translate promising early research into product development, the report also highlighted ongoing R&D silos across the government.  In their interviews with U.S. government global health experts, Yamey and colleagues “heard stories about agencies not being to collaborate with another due to bureaucratic barriers.” Yamey said.

The report also pointed to under-used global health R&D capacities, such as the R&D conducted by the Department of Defense. “The U.S. Department of Defense is doing extraordinary research on diseases like malaria and leishmaniasis, which affect both U.S. soldiers and also the poorest populations in the world,” Yamey said. “So this kind of research can provide a spillover effect from protecting members of the military to the poorest of the poor.”

Goraleski concurred: “Goodwill and collaboration are byproducts of Department of Defense labs around the world that strive to address country-specific health issues such as infectious disease.”

She went on to say, “Science is an important tool of diplomacy.”

Finally, said Yamey, an area that the U.S. government needs to greatly improve on is the way in which it tracks its global health R&D investments across its multiple agencies. “There is no single definition of research and development, used by all agencies, thus there no solid mechanism for tracking progress.”

Yamey moderated the second panel, “What’s Worked and Why: PEPFAR and the President’s Malaria Initiative.” He was joined by Nina Hasen, director of HIV and TB Programs at Population Services International and Josh Michaud, associate director of global health policy at the Kaiser Family Foundation.

Hasen opened by highlighting the history of PEPFAR, in which members of both parties in the U.S. had a shared sense of urgency about the HIV/AIDS pandemic. “In the early 2000s, we started with small pilot research programs to show proof of concept,” she said. “Quietly, we figured out what we could do and do well. We went on to build the program and build consensus. The program has worked well and continues to enjoy bipartisan support.”

When it comes to malaria, “In 2004 at the peak of the epidemic, 1.8 million people died of the disease, 70 percent of them kids under age five,” said Michaud. “In 2005, we established the President’s Malaria Initiative.”

He went on to say that there were effective tools for preventing malaria, they just needed to disseminated and scaled up. “In 2000, less than two percent of households used insecticide-treated bed nets. By 2015, that number had grown to 70 percent,” he said. The President’s Malaria Initiative (PMI) also funded indoor spraying to keep mosquitoes at bay and treatment, according to Michaud.

“With PMI, as with PEPFAR, there was a single-minded focus to preventing the crisis of a particular disease,” said Michaud.

Hasen said the key ingredients with both PEPFAR and PMI was a moral purpose, plus ambitious and achievable targets with strict accountability. “The combination of the heart and mind led to broad bipartisan support,” she said.

The big question for the current presidential administration, said Hasen, is whether funding will allow for effective epidemic control. If the proposed budget cuts come to pass, country governments will be unable to pick up the slack.

The third panel included Amy Pope, former deputy assistant to the president and deputy homeland security advisor in the Obama administration, who “came to appreciate that global health threats are biggest concern to our security and stability.”

Pope was joined on the panel by Dennis Carroll, head of USAID’s Emerging Threats Program. Julia Belluz, a Vox.com health reporter, asked Pope and Carroll what was keeping them up at night and what should concern the Trump administration.

Pope said what worried her most was an airborne infectious disease, such a strain of flu. That, plus the ability to act globally is limited, she said.

Carroll said he’s concerned that we get overly focused on the agent or virus of the day and we don’t learn from past events.

“The H1N1 outbreak was the greatest simulation exercise for a pandemic,” he said. “It created an opportunity to understand the dynamics to how a pandemic plays out and what our responses should be.”

He went on to say, “Our playbook hasn’t advanced. We rely almost exclusively on a vaccine, which takes a long time to scale up and distribute. We can’t keep pace with the way Mother Nature moves through the population.”

Regarding President Trump’s proposed budget, Carroll had some encouraging words: “The end result is always different from the original proposal.”

“Global health issues have always enjoyed tremendous bipartisan support, with both parties understanding it to be a worthwhile investment,” he said.