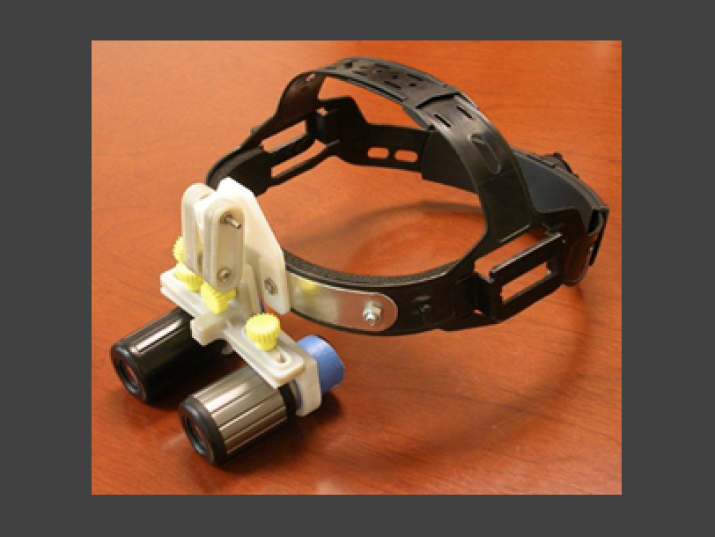 David Walmer, associate global health professor at the Duke Global Health Institute, has long been struck by the alarmingly high incidence of cervical cancer in Haiti, despite the fact that it is highly preventable. The death rate from cervical cancer in Haiti is 30 times higher than that in the United States. Through his 20+ years of cervical cancer research, Walmer has learned that the annual Pap smears that women take for granted in the U.S.—which screen for pre-cancerous changes to a women’s cervix—aren’t considered the gold standard in Haiti.

According to Walmer, in Haiti, Pap smears miss the precursors of cervical cancer 85 percent of the time—a fact that prompted him and his colleagues to begin screening for cervical cancer using a colposcope, a device that gives a health care practitioner a microscopic view of the cervix. A colposcope is an expensive piece of medical equipment that is not typically found in low-resource settings.

This challenge led to the invention by Walmer of a portable colposcope that can be used in places like Haiti. This method is still used in Haiti as a secondary strategy for screening and confirming pre-cancerous cells on the cervix.

A 2009 study of thousands of women in India found that Pap smears and visualization techniques like colposcopy have high false negative rates that resulted in hundreds of deaths. The research team found that if there was no presence of the human papilloma virus, there were no deaths. Walmer found the results intriguing and potentially applicable in the Haitian setting. Because HPV is the precursor of cervical cancer, and Pap smears and visualization miss the vast majority of disease, Walmer thought it would be more effective to screen women for HPV. This is the basis of Walmer’s current research in Haiti.

In urban areas where more women have access to health care services, women found to be HPV positive undergo a colposcopy to take a biopsy of the cervix. If the biopsy shows pre-cancerous developments, the woman is treated with cryotherapy, where the cancerous cells are frozen and then slough off. In contrast, in rural areas where women have more limited health care access, any woman in Walmer’s research project found to be HPV-positive undergoes cryotherapy.

Walmer’s cervical cancer research has netted another finding that will certainly impact the health of women in low-resource settings such as Haiti. Historically, in order to screen a woman for HPV, a health care practitioner would need to swab the cervix in a clinic setting to collect cells. But Walmer and colleagues in Haiti have found that the presence of HPV can be just as reliably detected when a woman uses a soft brush to collect cells from her own vagina and then a community health worker packages the sample and sends it to a lab to be read.

Conducting clinical research for the past two decades in Haiti has not been easy. In his current project, Walmer has assembled seven sites, including two Family Health Ministries locations. He has had to find pathologists to read his samples and labs in which to process them, not to mention figuring out how to acquire test kits at a low price from global medical technology companies which often have little interest in working in low-resource settings like Haiti.

Despite these challenges, Walmer and his colleagues have so far screened an astonishing 23,000 women in Haiti for cervical cancer. They have also genotyped 2,000 of the samples so they know what types of HPV are present in the population.

Walmer’s work in Haiti led him to pathologist Greg Henderson of Mt. Sinai School of Medicine. Henderson founded a company called PathForceDx to bring digital pathology to Haiti to overcome the shortage of pathologists. Walmer and Henderson recently conducted a demonstration project in which they uploaded and effectively read more than 1,000 specimens on a computer screen. They are preparing that research for publication.

“In a country like Haiti that has only ten pathologists for more than ten million people, the ability to capture the global network of pathologists greatly improves the ability to provide timely diagnosis and treatment, which can lead to better health outcomes,” said Walmer.

Walmer recently established an organization called Haiti sans Cervical Cancer that brings together the Health Ministry and many other players in cancer prevention and treatment to collaborate more effectively. He says the organization’s goals include eliminating silos of care, establishing a standard set of screening and treatment guidelines, building a single cervical cancer registry and coordinating access to supplies and technology.

“We want to conduct research to discover better ways of delivering health care in low-resource settings,” he says. “We will then seek ways to find partners to scale up on a national level.”

Reluctant to say he is leading Haiti sans Cervical Cancer or even that he founded it, Walmer is concerned with “trying to be as other-centered as we can to effectively partner with all the players involved and interested in cancer prevention and care.”