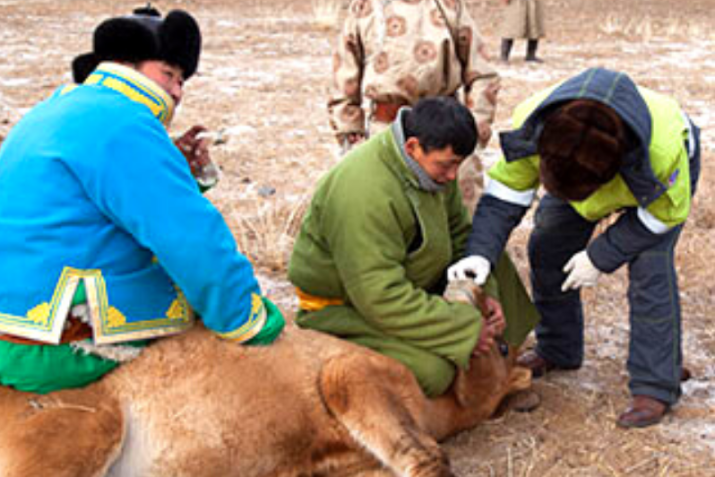 This article was reprinted with the permission of the Fogarty International Center at the National Institutes of Health.

Mongolia’s economy has undergone rapid changes in the past few decades with marked increases in livestock production of sheep, goats, camels, horses and cattle. As the normally pastoral populations in this nation bordered by China and Russia have begun migrating to urban areas, humans and animals are coming into closer contact, increasing the spread of disease. Climate change has exacerbated the situation, as well, requiring nomadic herders to move more frequently in search of water and grazing land for their flocks.

With limited research and diagnostic capacity, Mongolia has had difficulty responding to zoonotic diseases. But a Fogarty research training grant to Duke University’s Dr. Gregory Gray supported a five-year effort to change that. After receiving the grant, Gray recruited a dozen scientists for training in One Health concepts and innovative diagnostic, epidemiologic and analytical research methods.

Then the three-person teams of Mongolian and American scholars designed projects, moved them through ethical reviews, developed budgets and bought supplies. During the process, Mongolian trainees studied English language proficiency and presentation skills.

Gray and Dr. Battsetseg Gonchigoo, of Mongolia’s Institute of Veterinary Medicine, and others provided mentorship throughout, as the teams conducted their field work, analyzed results, prepared publications and wrote grant applications. The research teams studied various aspects of animal-human interactions over six years and published more than 20 scientific articles with their findings.

Some of the results were surprising, Gray says.

“For instance, we found the first evidence that strains of influenza A virus that commonly infect horses were also likely infecting camels. And we found an unusual rickettsial pathogen in ticks, which might explain some of their tick-bite associated deaths among humans.”

Mongolia is home to about 3 million people and 50 million livestock, which provide critical resources, including meat and milk products, leather and hides, wool, cashmere, and other goods needed for household sustenance and to barter and sell.

To better understand the types of animal-human contact, hygiene practices and knowledge of zoonotic diseases among people in Mongolia, one research team developed and conducted a survey of Mongolian herding households. Participants reported the contact they had with animals, for instance during birthing, milking or slaughtering. They tracked the handling of manure used for fuel. While the majority said they washed their hands after animal contact, most did not after defecation or urination. Less than half the respondents had access to an improved drinking water source and about 50% reported practicing open defecation. Most households had knowledge of disease transmission from animals to humans but far fewer understood the reverse.

Research teams also studied tick-born infections, demonstrating they are common among domestic animals, small wild mammals and herders. Others focused on mosquito-borne infections that can cause diseases, such as encephalitis and West Nile Virus in both animals and humans. Another research group used rapid diagnostics to look for influenza A and B, tests that may be an effective tool for rural practitioners. Other trainees investigated the prevalence and risk factors for intestinal parasites.

Findings from Gray’s teams have helped shape Mongolian public health strategies and researchers have developed flyers, videos and an educational handbook for herder safety, and encouraging influenza vaccines and the use of personal protective equipment. Text messaging might be considered for future outreach, Gray says, since the survey found solar-power charged cellphones were present in all herder households.

Gray hopes the discoveries made in Mongolia can help to reduce the burden of zoonotic diseases among pastoral people worldwide.

“If we can anticipate when microbiological threats are jumping back and forth between animals and humans before they take hold and become very transmittable, then we can design mitigation strategies,” says Gray.

“What impacts people in the developing world today can be a problem in our very own back yard tomorrow, so the work that Fogarty does in global health is extremely important in protecting U.S. citizens and their animals.”