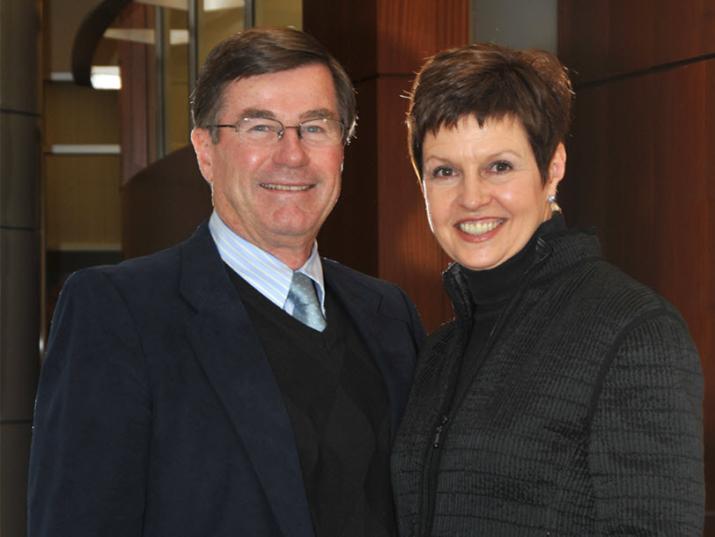 Editor’s note: We’re pleased to highlight the seventh in a series of profiles that highlight qualifying gifts for the Bill & Melinda Gates Foundation Global Health Matching Grant. This dollar-for-dollar match is reserved for gifts that support priority areas for the Duke Global Health Institute: education programs, graduate fellowships, faculty support and international partnerships. Unrestrictive gifts for use at the discretion of the Institute director may also be given.

Craig Brater, a doctor and two-time Duke alumnus, believes that medicine is a calling—not a business—and that giving doctors the opportunity to practice medicine in underserved settings reinforces the altruistic spirit of the health professions.

Brater, who earned his undergraduate and medical degrees at Duke, brought this philosophy to life during his 26-year tenure as chair of the department of medicine and dean of the School of Medicine at Indiana University (IU). Now retired, he and his wife, Stephanie, are continuing to provide these opportunities for medical students, residents and fellows.

They’ve established the Craig and Stephanie Brater Global Health Fund to support experiential learning and international research for third-year medical students, residents and fellows pursuing global health at Duke University. Priority will be given to trainees working in Kenya, sub-Saharan Africa or other low and middle income countries.

Rewind to 1990: Building a Program in Kenya

In 1989, when Craig was a professor of clinical pharmacology at IU, the department of medicine launched a program that enabled medical students and residents to study, conduct research and practice medicine in a developing country. When Craig became chair of the department the following year, continuing to develop the program was a no-brainer for him, given his personal philosophy and professional desire to model this thinking on an institutional level.

The department established a small initiative at Moi University in Eldoret, Kenya, in which IU students and residents spent about two months working with Kenyan clinicians in clinics and hospitals and in public health rotations in the community. Early on, the IU contingent fit into a six-bedroom house; by 1999, the program expanded to a second house.

In 2001, the IU School of Medicine became a founding partner of AMPATH, a consortium of Kenyan and North American academic health centers facilitating student and faculty exchanges in clinical care, training and research in partnership with the Kenyan government. At the time, AMPATH’s mission focused primarily on addressing the HIV/AIDS crisis, but has since broadened to focus on a wide range of health issues. Currently, IU, the consortium’s lead institution, hosts about 75 trainees and faculty in 15 houses at any given time.

More than a Professional Calling

“From the beginning, Stephanie and I were very enthusiastic about the program,” Craig reflected. “We were always looking for opportunities to go there, roll up our sleeves and do meaningful work.”

When they began traveling to Kenya, Stephanie and their teenage daughter, Aimee, spent many days volunteering at an orphanage, where they became particularly close with one of the teachers and her five children. The teacher asked the Braters if they would bring her children to the United States to get a college education, and they readily obliged.

So far, they’ve put three of her children through college. Michael, the oldest—who was 10 when the Braters first met him—earned a bachelor’s degree in computer science at Indiana University-Purdue University Indianapolis and a master’s in public health at the IU School of Medicine. He’s currently working in an international job at the University of North Carolina in the area of infectious disease.

The Braters’ connection with this family has deepened over the years. “We get so much more out of it than we could ever put into it, on so many different levels,” said Stephanie.

The Inspiration for the Gift

Craig and Stephanie believe strongly in the value of reaching out to underserved communities and individuals, and their gift to the Duke Global Health Institute (DGHI) is an example of how they’ve sought ways to inspire others to pursue this path.

When asked why they chose to support DGHI specifically, Craig noted the appeal of DGHI’s interdisciplinary approach and the programs DGHI provides for people with diverse perspectives to engage in global health efforts. Duke’s involvement in the AMPATH program was another major factor in their decision.

He hopes that DGHI will continue to encourage people of all backgrounds to learn from each other and gain hands-on experience in the developing world. These experiences, he believes, can have a profound impact on students’ development as compassionate human beings.