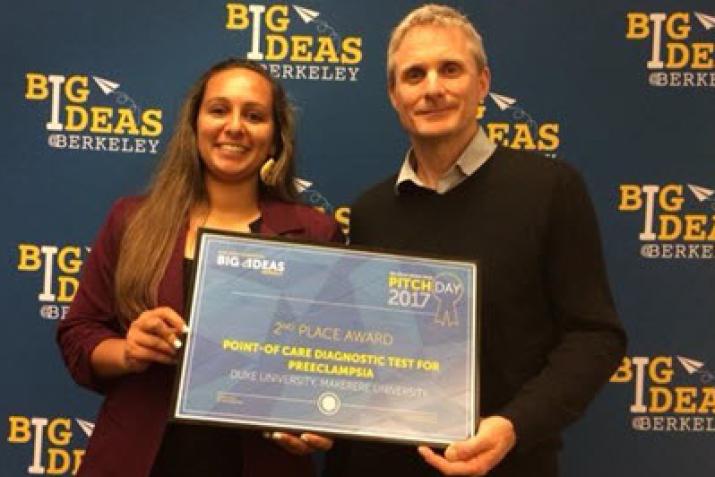 MSc-GH student Denali Dahl poses with her team's Big Ideas mentor, Richard Lowe, senior scientist at The Clorox Company, at the Big Ideas Grand Pitch competition. Denali's teammates, Brian Matovu and Zoe Sekyonda, were not able to attend the event but Skyped in from Uganda.

A team of students from Makerere University (MUK) in Kampala, Uganda, and Duke University have been working together for more than a year to develop a simple screening tool for preeclampsia in low-resource settings. This joint Duke-MUK venture, which began as a class project in a transcontinental engineering design course last spring, is now well on its way to fruition.

And last week, the team won a total of $13,000 in funding through the Big Ideas competition, enabling them to take the project to the next level. Team members include Brian Matovu and Zoe Sekyonda, undergraduate biomedical engineering students at MUK, and Denali Dahl, a master’s student at the Duke Global Health Institute.

Early Detection and Monitoring are Key to Managing Preeclampsia

Preeclampsia is characterized by persistent high blood pressure in pregnant women and can lead to kidney and liver problems, fluid in the lungs, seizures and visual disturbances. If undiagnosed, preeclampsia can lead to eclampsia, a condition that can result in serious health risks for a woman and her baby and, in some cases, cause death. Worldwide, approximately 76,000 pregnant women and about 500,000 babies die each year from preeclampsia and related hypertensive disorders.

With early detection and monitoring, preeclampsia is usually manageable. But in many low- and middle-income countries (LMICs), where prenatal care is limited, women are seven times as likely to develop preeclampsia than women who live in countries where ongoing prenatal care is the norm. At Mulago Hospital in Kampala, Uganda, eight percent of all labor ward admissions—three to four women per day—are preeclampsia patients, and 21 percent of maternal deaths are due to complications related to severe preeclampsia or eclampsia.

Bringing Preeclampsia Screening to Uganda and Beyond

These troubling statistics motivated Matovu and Sekyonda—students in the MUK Biomedical Engineering Design Module led by Robert Ssekitoleko, lecturer in biomedical engineering—to find a way to bring affordable, accessible preeclampsia screening to women in Uganda and other LMICs. They were soon joined by Dahl as part of Duke’s Transcontinental Design in Uganda course, taught by biomedical engineering professor William “Monty” Reichert.

Through a literature review, they learned that two protein biomarkers—activin A and inhibin A—elevate dramatically during early onset of preeclampsia, even before the woman experiences symptoms. So, they set out to develop a home-based diagnostic test strip that can instantly detect these biomarkers in a woman’s urine, thereby empowering and educating women so they know when to seek medical care before their complication becomes severe.

Currently in Uganda, 70 percent of pregnant women have only one prenatal visit, which takes place at the beginning of their pregnancy. The team’s hope is that women could receive a bundle of test strips and an instructional pamphlet at this visit, along with a pamphlet that explains how and when to use the strips and what to do if they get a positive result for preeclampsia.

They’re hoping that the Ministry of Health and/or a non-governmental organization will consider subsidizing the cost of the strips—about one to two dollars per strip if they’re mass-produced.

The team’s one-year goal is to develop 100 fully-functional test prototype strips. Their approach is two-pronged:

After that, Dahl said, the team will focus on the business model and implementation considerations. “Once we have the product, we need to understand the ecosystem,” she said. “We need to know whether and how people will use it, how it will fit into the clinical flow and other important implementation questions.”

Big Ideas is an annual contest based at the University of California at Berkeley that provides funding, support and encouragement to interdisciplinary teams of students with “big ideas.” The ultimate goal of Big Ideas is to support students in making social change. The contest promotes autonomy, initiative and teamwork early in students’ careers, broadening their understanding of how they can use their education and interests to improve society.

On April 17, the team learned they’d won $10,000 as first place finishers in the global health category. A week later, they won second place in the contest’s Grand Pitch event, earning them another $3,000. This funding supplements $2,000 provided by MUK to perform a preliminary biomarker validation study and a $2,500 prize Dahl won for the project at the ChangeWorks competition, sponsored by the Duke Innovation and Entrepreneurship Initiative.

Dahl and Matovu spoke highly of their Big Ideas experience and especially appreciated the support of the mentor they were assigned as part of the competition: Richard Lowe, senior scientist at The Clorox Company. “He helped us think through every aspect of the project and asked really important questions,” Matovu said. “By the time we submitted our project, I had confidence that something would come out of it.” Frequent three-way Skype calls between North Carolina, California and Uganda were essential to their success.

“For me, the project is a dream come true,” reflected Dahl, whose background is in engineering. “I’m hoping to apply nanoengineering and bioengineering technologies to address global health problems, and to see that something that started as a class idea could actually become a reality and have an impact has been incredible.”

She also acknowledges the important role her DGHI education has played in the project. In her biostatistics course, she learned how to design a clinical study—knowledge she applied when conceptualizing the study that will help the team determine cutoff values for diagnosing preeclampsia. “Before this program, I could do the engineering side, but I’d never done the clinical studies side,” she said. “I was able to think through the data analysis plan, and I knew which questions to ask.”

Matovu has also enjoyed the project, despite its challenges: “We were so excited to solve the problem, but we didn’t anticipate the work ahead of us—including the heavy research involved and the need to seek funds to run the project,” he said. “At times, I’ve felt like giving up, but having a great team has helped me stay focused.”

Sekyonda echoes Matovu’s feelings about the project and the team: “The project hasn’t been easy,” she said. “With a big global challenge in front of us, we had to be committed to find a better solution for our community.” She added that their mentors from MUK’s School of Biomedical Sciences and Duke’s Pratt School of Engineering also played a huge role in the project’s success. “We can’t underestimate the seeds of knowledge that the late Professor Bimenya Gabriel [of MUK] planted in us,” she reflected.