A lineup of speakers from around the globe is planned 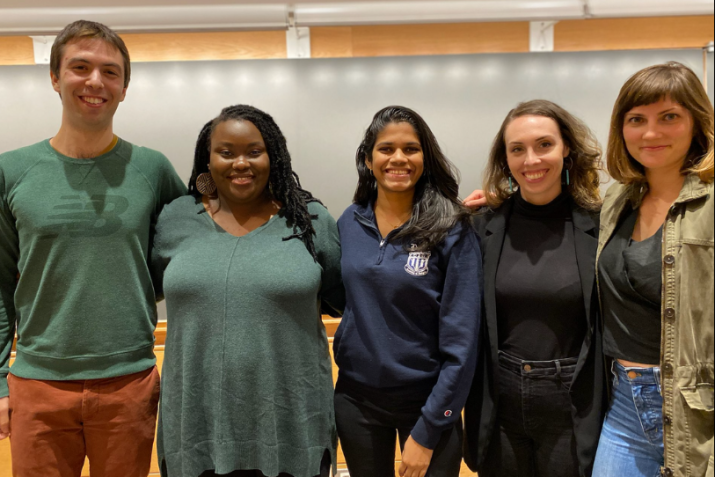 What started as a conversation in a Duke student lounge about a year and a half ago has bloomed into an international conference.

The students who gathered that day—Andrea Koris, Laura Mkumba and Yadurshini Raveendran—say they’ve had a vibrant response from people all over the world to the “Decolonizing Global Health 2020” conference, which takes place Friday, Jan. 31, from 1-5:30 p.m., at Love Auditorium in Duke University’s Levine Science Research Center.

“I think for us, that first conversation centered around sharing about our different experiences working in global health all over the world in different capacities, and that grew into us wanting to create a safe space for us and our peers to continue this conversation,” says Raveendran, a second-year Duke global health master’s student.

After their initial discussion, Mkumba, also in her second year as a global health master’s student at Duke, says, “We started talking to different professors and we researched and found conversations about the decolonization of global health that were happening at other schools—UC Berkeley, the University of Michigan, Harvard.”

The three attended a Harvard conference in February 2019 on the topic and were more inspired than ever to organize a similar meeting at Duke.

“We had the intention of continuing that conversation with these other institutions and decided to have a conference here, too,” says Mkumba.

While global health—which in the past has sometimes been referred to as “international health”, “tropical medicine” and “colonial medicine”—has a long history, the discourse on decolonization in global health is relatively new, says Koris, also a second-year student in the MS in Global Health program at Duke. Decolonization, she explains, is a process of dismantling systemic injustices related to race and gender that stem from legacies of colonial hierarchies—on individual, collective, and systems levels.

“I was personally really inspired by decolonization protests that took place about five years ago now in Cape Town, South Africa,” Koris says. Since then, the word “decolonization” is cropping up not only in the global health arena, but also in social work, labor and public health, among other fields.

“This whole movement is asking broad questions about how we reexamine the roots of oppressive systems. Every generation reifies these oppressive systems and it’s really important we continue to ask these critical questions,” Koris says, explaining that histories of colonialism, slavery, sexism, and classism are often muted by a focus on how development interventions can alleviate human suffering.

Even at top universities and organizations that have the best intentions, “global health is practiced in a depoliticized and ahistorical manner,” Koris says.

The conference features speakers from the World Health Organization (WHO), University of York, McGill University, the University of North Carolina at Chapel Hill, Harvard University, FHI-360, the editor-in-chief of BMJ Global Health, and experts from Duke. The conversation will explore ways in which the language, methods and practices around global health continue to be shaped by colonial models, including case studies from Haiti, India, the United States, and other countries.

Raveendran, who is from Sri Lanka, says her interest in the decolonization discussion goes beyond academic—it’s personal.

“Why I’m really passionate about this is because I’ve faced micro- and macro-aggressions here as an international student,” she says.

Acknowledging the architecture of coloniality and how global health emerges from that architecture is one of the key goals of the upcoming event, the conference planners say. Exploring ways of imagining alternative systems is the next step.

The students credit professors Kearsley Stewart and Gavin Yamey for helping find speakers and shape the meeting agenda. Stewart has appointments in the Duke Global Health Institute and the Department of Cultural Anthropology, and Yamey is the director for the Center of Policy Impact in Global Health.

Decolonization isn’t going to happen with just one event at Duke, in the span of six hours, they note.

“We can’t do this and then check it off. It starts with reflecting on the past and then moving forward. And how we can turn these reflections into actions,” says Mkumba.

What started as a conversation in a Duke...