Lead from bullets transfers to humans when they eat meat from hunted animals, researchers find. 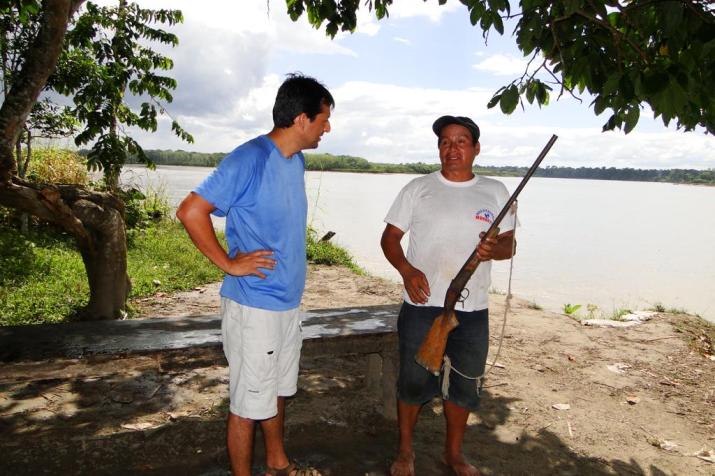 Duke researcher Ernesto Ortiz talks with a hunter in the Madre de Dios region of Peru.

People who consume wild game frequently have higher amounts of lead in their bloodstreams, according to a study conducted by Duke Global Health Institute researchers in the Madre de Dios region of Peru. The findings, which were published in The Lancet Regional Health—Americas journal, indicated that indigenous communities who live in the region are especially at risk for high lead levels in blood since their culture and traditions involve frequent consumption of wild game.

The use of lead ammunition is the culprit, according to William Pan, DrPH, senior  author and associate professor of global environmental health at Duke. “Most bullets used for hunting are made of lead, and are designed to fracture and splinter once entering an animal to cause the most damage,” he says. “The lead is not only absorbed into the animal, but it is absorbed into the humans who consume the meat.”

Lead is especially problematic because it can persist in the body for a very long time. Unlike mercury, which mostly leaves the body through waste, “lead is absorbed into your bone and can last for decades,” says Pan. Red blood cells, manufactured in bone marrow, then carry lead into the bloodstream.

Pan has previously studied toxic levels of mercury in Peru brought on by small-scale gold mining. But his attention turned to lead exposure when a graduate student in his lab, Axel Berky, Ph.D., was analyzing blood samples collected from people living in the Madre de Dios region of Peru, and noticed that patterns of mercury exposure did not always align with where metabolic impairments were being observed. Since diet is one factor that can cause metabolic function, Berky started to dig into what could be behind the metabolic impairments. And then, he had a light bulb moment.

“During our team’s time in the field, we’ve spent a lot of time with community partners. Our colleague, Dr. Ernesto Ortiz, mentioned in passing that he ate wild game with a community leader and had to pick out pieces of lead shot,” explains Berky. “That story stuck in my head.”

With this in mind, the team decided to take a second look at blood samples they had collected from people in the region in 2019 as part of their work on mercury contamination.  Berky then compared the results with what people told the researchers about their lifestyle, particularly how much wild game they ate.

“One of the first things I did was plot the means and ranges of blood lead levels by frequency of wild game consumption” Berky says. “That’s when I realized that there might be an association or risk of lead exposure from consuming wild game shot with lead ammunition.”

In fact, after running several analyses using these data, including a toxicokinetic model developed by the U.S. Environmental Protection Agency, the researchers determined that those who ate wild game had a 40% increase in blood lead levels and were four times as likely to have lead levels defined as concerning. Indigenous participants were 24 times more likely to have blood lead levels that exceeded the level of concern.

Although a wide range of factors have been tied to lead exposure in South America, including oil spills, lead fishing weights, and yucca consumption, this is the first study to directly tie wild game consumption to blood lead levels on the continent as the authors explain in the paper.

“The easiest intervention would be to replace lead bullets with copper bullets,” says Pan. “But in practice, the replacement is easier said than done. Copper bullets are lighter and less prone to fragmenting, but are also typically more expensive and are thought by many hunters to not be as effective in killing their prey.”

Image
Capybaras, which are hunted for food in the Madre de Dios region of Peru, are among the animals contributing to elevated lead levels in indigenous populations, according to researchers.

Capybaras, which are hunted for food in...

The team’s findings in Peru compelled Pan and Berky to take a closer look at potential lead exposures from wild game consumption in their own backyard, in central North Carolina. They have applied for two grants to evaluate lead exposure risk to hunters and among people receiving donated deer meat through food banks.

Pan and his team would like to screen the meat as well as the people who eat it—the hunters themselves, and the recipient of the donations—to determine if there is any harmful lead exposure taking place.

“Lead is one of the most toxic substances on earth,” said Pan. “Like mercury, it is a silent killer, where people are often unknowingly exposed and signs of exposure do not arise for several years. By the time anyone can do something to mitigate the damage, it is often too late. Exposure prevention is currently the only effective way to stop the harmful health effects."