Megan Huchko, director of the Center for Global Reproductive Health at Duke, is working in partnership with the Ministries of Health in central Uganda and western Kenya, to evaluate the best ways to implement HPV-based cervical cancer screening in rural areas. 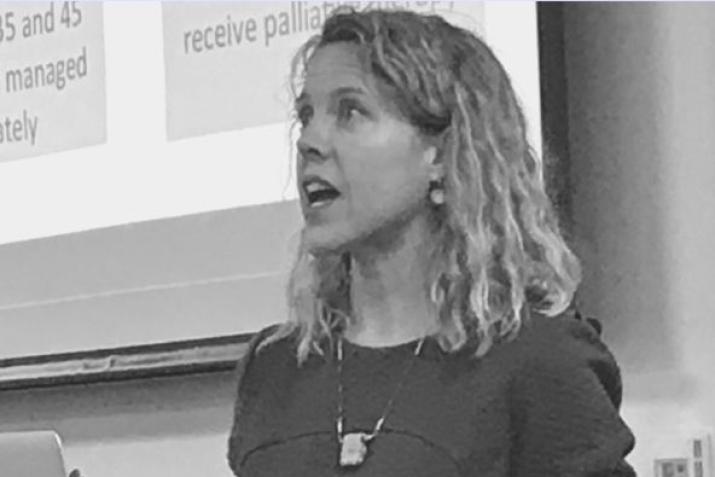 Megan Huchko, director of the Duke Center for Global Reproductive Health, and associate professor of obstetrics & gynecology and global health, is pictured speaking about stigma and reproductive health in Africa at a 2019 DGHI Think Global talk.

In 2013, the World Health Organization (WHO) issued cervical cancer screening and treatment guidelines to help fight the deadly disease that affects women around the world, especially those in low- and middle-income countries. Then in 2018, WHO challenged the global health community to shoot for the total elimination of cervical cancer, inspiring healthcare leaders to increase their efforts.

In Kenya, where cervical cancer is the second leading cause of cancer among women, health decision makers are responding to WHO’s initiative. Megan Huchko, director of the Center for Global Reproductive Health at Duke and associate professor of obstetrics & gynecology and global health, says steps such as introducing HPV vaccination into Kenya’s routine immunization program are positive, but many challenges still remain.

Huchko, who has worked with colleagues in Kenya for more than a decade, is among global health researchers and clinicians making inroads in the area of human papillomavirus (HPV), the virus that’s linked to cervical cancer. HPV is actually not one virus but a group of about 100 viruses which are very common. Women are generally infected through sexual contact. Some forms can be harmless, but sometimes HPV leads to genital warts and cervical cancer and two types of HPV viruses are at the root of the majority of cases of cancer and pre-cancerous lesions.

Huchko’s recent work includes several large studies in partnership with the Ministries of Health in central Uganda and western Kenya. Her work is aimed at evaluating the best ways to implement HPV-based cervical cancer screening in rural settings, especially in areas where women have limited access to reproductive healthcare. The findings could also help address the issue in the U.S.

Cervical cancer is the second most common cancer in women living in less developed areas of the world, according to the WHO. In 2018, there were an estimated 570,000 new cases of cervical cancer worldwide and approximately 311,000 women died from the disease. More than 85 percent of deaths were in women from low- and middle-income countries.

“There’s this growing movement in western Kenya of medical leaders and politicians to get the government to put funding behind the guidelines,” she says, explaining that the Kenyan government passes much of the power related to health initiatives over to local leaders.

“So now what we’re seeing—it’s called devolution. It is a decentralized model,” says Huchko. “Each county has the autonomy to develop and implement their own strategies to address key health issues for their population. Although there are national recommendations, or protocols, for cancer prevention, there is not a standardized implementation strategy.”

Reaching women as early as possible is the key. She says, “One way we’ve been doing that is we’ve had increasing movement toward government partnerships.”

In Kenya, Huchko and colleagues conduct community-based HPV screening using a self-collection method so that no pelvic exam is needed. They offer this screening through door-to-door visits or larger community health campaigns. These efforts have upped screening coverage from 5% to 70% in certain areas of rural Kenya.

Her team has also created a mobile app called mSaada. They trained community health volunteers to use mSaada and in turn, use it during local HPV-based cervical cancer screenings. Huchko says it encourages and supports counseling and tracking patients with the aim of getting more women to come back for follow-up care.

Very recently, in October 2019, the Ministry of Health in Kenya introduced government-sponsored vaccines, becoming the twelfth country in East and Southern Africa to integrate the HPV vaccine into its routine immunization schedule.

“So we are working to expand our messaging to include families and girls eligible for government-sponsored vaccinations,” Huchko says.

But it’s going to continue to be a long journey before there are truly effective protocols for HPV prevention, screening and treatment in place, she adds.

“If we could really establish HPV testing and treatment in western Kenya, by that time I’ll be ready to retire I think,” Huchko says.