Fixing A Birth Defect That Shouldn't Be Fatal 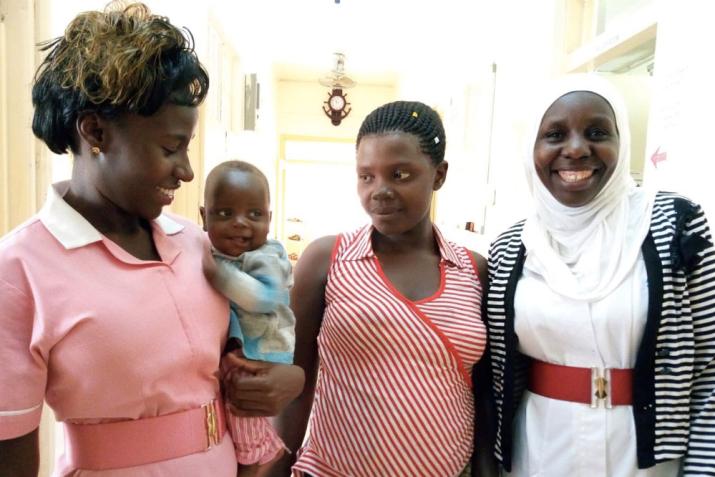 Born with gastroschisis, baby Nathaniel was one of the first in Uganda to survive the rare birth defect.

When little Nathaniel was born at Mbarara Regional Hospital in western Uganda, everyone was sure he was going to die. Nathaniel had a condition called gastroschisis, where a baby is born with its intestines, and sometimes other organs, outside of its body. Of all the babies born with gastroschisis at Mbarara then, none had survived.

But surgical resident Anne Shikanda Wesonga believed she could change that. Wesonga, who was participating in a pediatric surgery training program developed by DGHI and international partners, knew that in high-income countries such as the United States, newborns with gastroschisis receive a fairly simple surgical correction, and almost all fully recover. For a year before Nathaniel arrived, she had been working with Tamara Fitzgerald, an assistant professor of surgery at DGHI, to find ways to improve the chances for babies born with the condition in Uganda.

“There are kids dying, and we have a solution for it,” says Fitzgerald.

In the U.S., gastroschisis is typically spotted in prenatal ultrasounds, and at birth, babies are whisked into neonatal intensive care, where they are fed an intravenous solution and their organs are protected until they are ready for surgery. In Uganda, however, prenatal screenings are not as common, and by the time babies with gastroschisis arrive at major health centers, they are often dehydrated and their organs damaged. Even then, most Ugandan hospitals do not have the special solution or equipment to protect the babies’ organs.

Wesonga and Fitzgerald have tried several avenues, including different ways to nourish babies and improvising a shield from surgical gloves to protect their organs. Their creativity paid off: Nathaniel survived and surgeons were able to repair his organs, fueling hope that gastroschisis in Uganda does not have to be a death sentence. Of the next 17 babies born in Mbarara with gastroschisis, 10 survived.

“Since then, it’s just changed everything,” Wesonga says. “Now if a baby with gastroschisis comes in, everyone tries to do something. There’s really hope.”