Flexible Approaches May Encourage More People to Use Clean Cookstoves 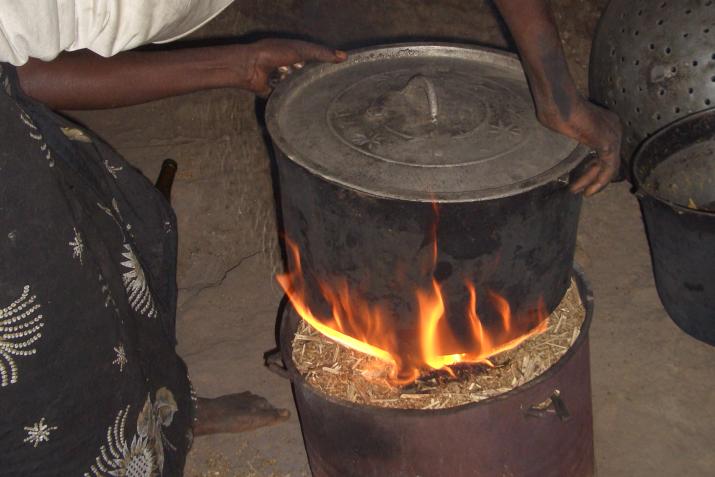 Simple biomass-burning cookstoves such as this "rocket" stove in Senegal could help reduce emissions from cooking over wood fires, a major driver of climate change and deforestation. Photo courtesy of Gunther Bensch

The morning sun rises; time to get the coffee brewing and start breakfast, maybe plan for the evening meal. For nearly three billion people – more than one third of the world’s population – these daily routines begin with an ancient ritual: collecting fuel for a fire.

Cooking over solid fuels like wood and charcoal remains so pervasive that it is considered a major driver of deforestation and climate change, along with contributing to respiratory and other health problems. In fact, a just-published analysis suggests that replacing  the traditional, wood-burning stoves in sub-Saharan Africa alone with more efficient technology would be enough to offset the carbon emissions of Belgium or Florida.

That’s easier said than done, notes Marc Jeuland, Ph.D., an associate professor of public policy and global health and faculty director of the Duke Energy Access Project who led the research. The price of new stoves, uneven availability of alternative fuels, and the firm grip of traditional practices have all made adoption of clean-cooking technologies in Africa more sluggish than many hoped.

”Cooking is probably one of the most deeply embedded cultural practices globally,” Jeuland says. “It can be very slow to change these kinds of traditions.”

But in the new study, published in the June issue of the journal One Earth, Jeuland and colleagues say a more flexible approach can help speed conversion – and the inherent environmental benefits – on the continent.

The authors note, for example, that the stoves considered the clean-cooking gold standard by the World Health Organization, which typically use liquified petroleum gas (LPG) or electricity, remain out of reach in many rural and remote parts of Africa, where fuel sources may be unavailable or unstable. In such places, conversion efforts may have more success by focusing on intermediate technologies, such as cleaner-burning biomass stoves.

While simple, kettle-like “rocket” stoves use wood and other solid fuels – and therefore don’t mitigate the health risks of indoor air pollution – they do reduce emissions by burning more efficiently. They are also relatively inexpensive, costing between U.S. $5 and $20, and can be made using locally sourced parts and labor.

Jeuland sees such lower-tech stoves as a bridge from the status quo to a cleaner-cooking future. “We have these middle-ground solutions that deliver a lot of benefits, and they are ready to go right now,” he says. “Rather than just waiting for some day when we can do the cleanest technology, we could gain a lot by aggressively promoting these options now.”

An expert on energy economics with appointments in three Duke schools (Public Policy, Environment and Engineering), as well as the Duke Global Health Institute, Jeuland has devoted much of his research in recent years to understanding the barriers that have slowed global adoption of cleaner cooking technologies. One reason converting households to more efficient stoves has proved difficult, he says, is that the immediate benefits are greater to society than to the individuals making the change. There is also the reality that in many low-income households, women, who stand to benefit most from new cooking technologies, often have little input on such decisions.

Paying attention to local preferences and amplifying women’s voices in decision-making are critical to ramp up conversion rates across sub-Saharan Africa, Jeuland says. But he also emphasizes that the wide-scale benefits that accrue from cleaner cookstoves mean that governments and NGOs can and should be more proactive in subsidizing the change. He notes that supportive government policies have helped spur conversion to more efficient LPG stoves in countries such as India, where uptake of cleaner cooking technology has been faster than in most parts of Africa.

In a continent where some 900 million people still gather wood for their daily cooking, the potential for climate abatement is so vast that governments and NGOs should be bringing the cost for a household to convert to a cleaner cookstove down “to pretty much zero,” Jeuland says.

“If you do the calculation on an individual basis, there’s not necessarily a big incentive to convert,” he says. “But from a social perspective, it’s a slam dunk. That argues that the global community should be helping to pay for solutions that work and that do not require dramatic changes in food preparation, because everyone benefits.”