Published February 27, 2019 under Voices of DGHI 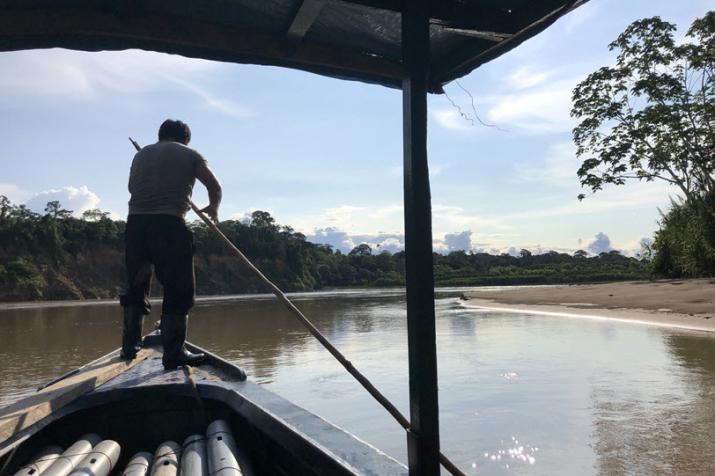 A scene from our boat on the Madre de Dios River.

In December of 2018, I had the opportunity to travel to Madre de Dios, Peru, as a member of the Environmental Epidemiology in Latin America: Impacts of Artisanal Gold Mining in the Peruvian Amazon Bass Connections project.

Madre de Dios is considered one of the most active biodiversity areas in the world, containing 15 percent of Peru’s forested area within its 85,301 square kilometers. However, this biodiversity is threatened by the increasing rate of deforestation, land degradation and pollution to air and water associated with gold mining, which has increased rapidly in the region due to rising gold prices.

Between 2006 and 2015, unregistered and informal (illegal) mining in Madre de Dios increased by 540 percent (Fraser 2016), and now roughly 20 to 25 percent of the region’s total population consists of gold miners. The miners extract the gold using mercury, which is emitted into the air when the amalgam is burned or released into the waterways during extraction. An estimated 30 to 40 tonnes of mercury are released into the waterways annually. In aquatic environments, mercury undergoes methylation and enters the food chain, where it ends up in humans who consume mercury-contaminated fish. 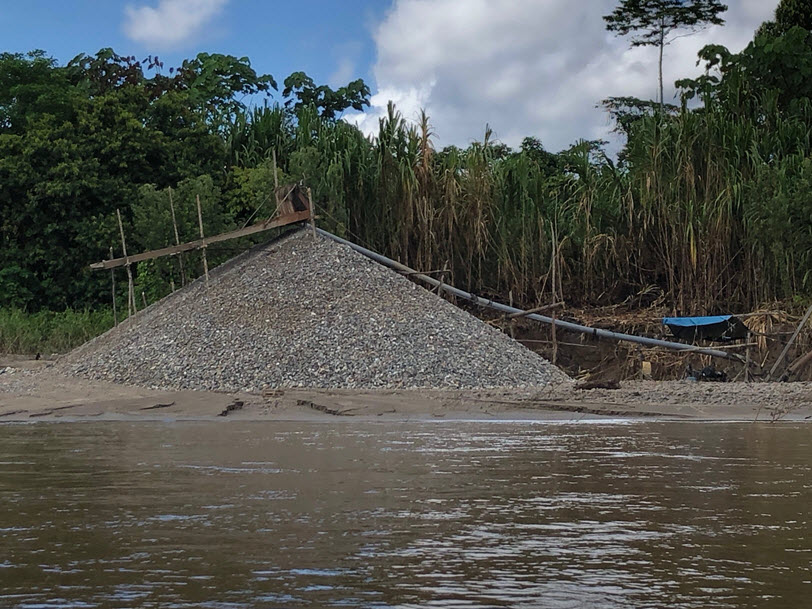 To understand how people upstream of mining are being exposed to high levels of mercury, we need to better understand the fate and transport of mercury in the environment. Therefore, Jacqueline and I spent four weeks in Madre de Dios collecting environmental samples, including river water, rainwater, soils, sediments, leaves and tree cores. Our sampling journey began in Laberinto and took us upstream to Boca Manu. 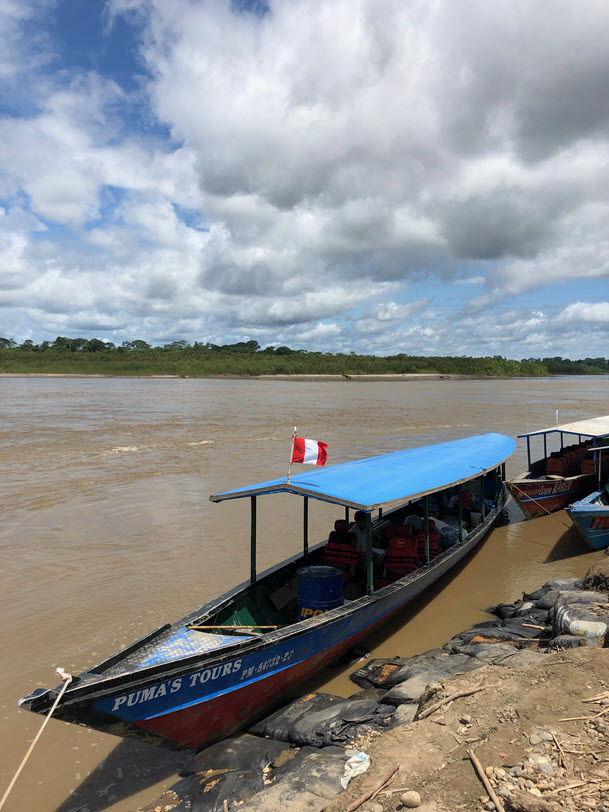 Boca Manu is where I spent the majority of my time in Madre de Dios. We arrived in Boca Manu on December 25. According to our sampling schedule, the latest possible date we could stay in Boca Manu before heading back down the river to collect our samples, break down our sites and head home was January 5. However, we figured since we were in the rainforest during the rainy season, two or three nights would be enough time for our rainwater collectors at our Boca Manu site to fill.

Boy, were we wrong. We ended up waiting for rain in Boca Manu for 11 days. It did not rain until January 4, but lucky for us, it rained hard that entire day, so we had enough rain when we had to leave the next day. Unfortunately, no rain meant no break in the summer heat—which was only confounded by the long pants and long sleeves I had to continue wearing to protect myself from the biting bugs.

I have never seen so many mosquitoes in all my life. It is no exaggeration when I say that hundreds of mosquitoes would swarm us in the jungle when we were setting up our sites. I could see them trailing behind the person walking in front of me, eager for them to stand still. No part of the body was safe. If you revealed even a slither of skin between your glove and sleeve, they would find it.

In the riverside town of Boca Manu, the number of mosquitoes did not rival the number in the jungle, but it did rival the number of people. When I asked the locals how many people lived in Boca Manu, they told me 40 families. The only number I could find online was for 1993, which reported 63 inhabitants. Although Boca Manu is fairly remote, it is located in between three protected areas: Manu National Park to the west, the Los Amigos conservation concession to the east and the Amarakaeri Communal Reserve to the south. 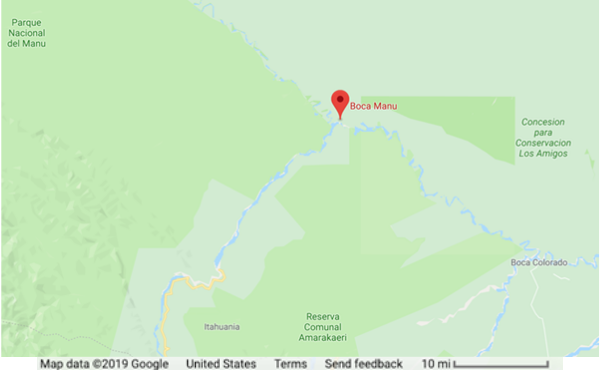 Its location makes it an ideal stop for tourists, and therefore accommodations are available for rent. During the 11 days I was there, only one family (from New Zealand) stopped in Boca Manu to buy drinks and groceries and then were on their way. However, it may be busier during the tourism season (April/May through September/October).

We stayed in one of the five cabins the abuela (“grandmother” in Spanish) had for rent. I called her abuela because that seems to be what everyone in town calls her: abuela or abuelita (the “ita” on the end denotes that she’s small, so “small grandmother”). In fact, I never learned what her real name was. 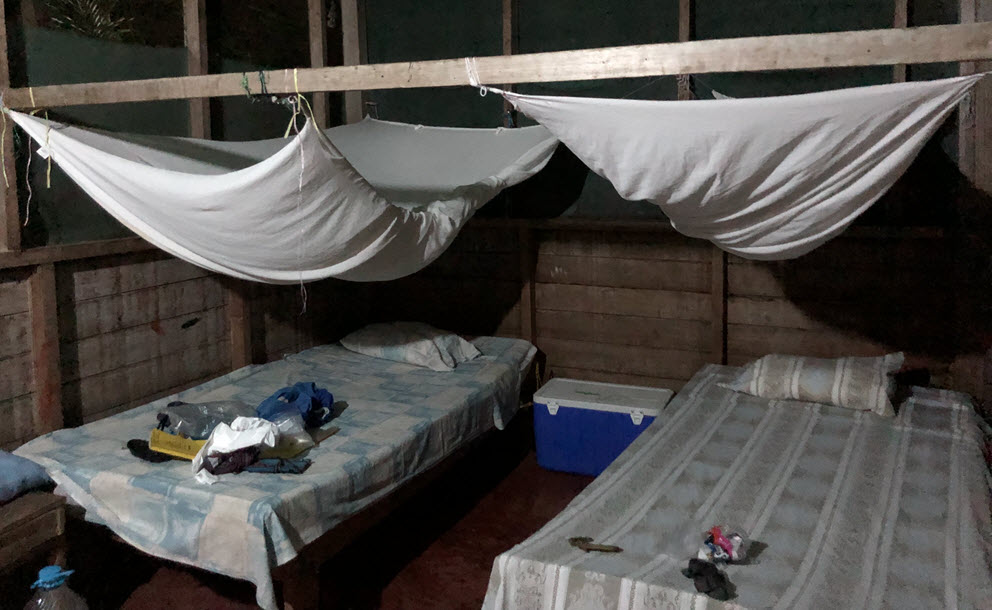 The inside of our cabin

She knew my name but called me nieta, which means “granddaughter” in Spanish. I think it may have been something she did with most of the young people, but it really emphasized the feeling of community in Boca Manu. Everyone knew everyone and everyone was willing to help one another out. It was the people of Boca Manu that made the long, hot and humid days waiting for rain bearable.

Besides a trip to the health post for what seemed to be an infected bite, there wasn’t much variation in my days. We ate every breakfast, lunch and dinner at the same place (the only place to eat). It was part restaurant, part shop, and was run by a lovely family. Every meal consisted of three parts: a starter (typically a vegetable or barley soup), a main dish and either a refresco (sugary drink) or dessert. The main dish was typically a mountain of white rice, a protein (usually chicken) and some other starch like potato, yucca or plantain. I was surprised by the amount of food they ate in Madre de Dios. I assumed that, because the area was fairly poor and very remote, food supply would be scarce, but I was wrong again.

I spent the majority of my time with the locals or writing in my journal. I sat at the same table outside the abuela’s store every day to write. In the evenings, locals would come play soccer in the field out in front of the stretch where her store was. 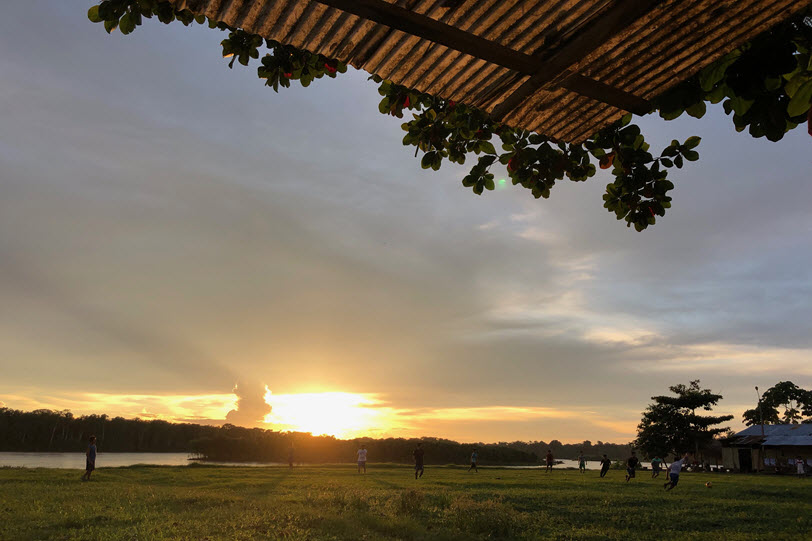 Locals playing soccer with the sun setting in the backdrop.

In Boca Manu, birds ruled the roost. The community was overrun with ducks, hens and roosters. I had a particular problem with the roosters who would begin calling loudly as early as 3 am. The abuela had recently gotten 13 new chicks to add to the feathered community, which she would let roam outside of her storefront.  Every day, I would sit and talk to her while we watched them, and then I would help her catch them all to bring back inside. 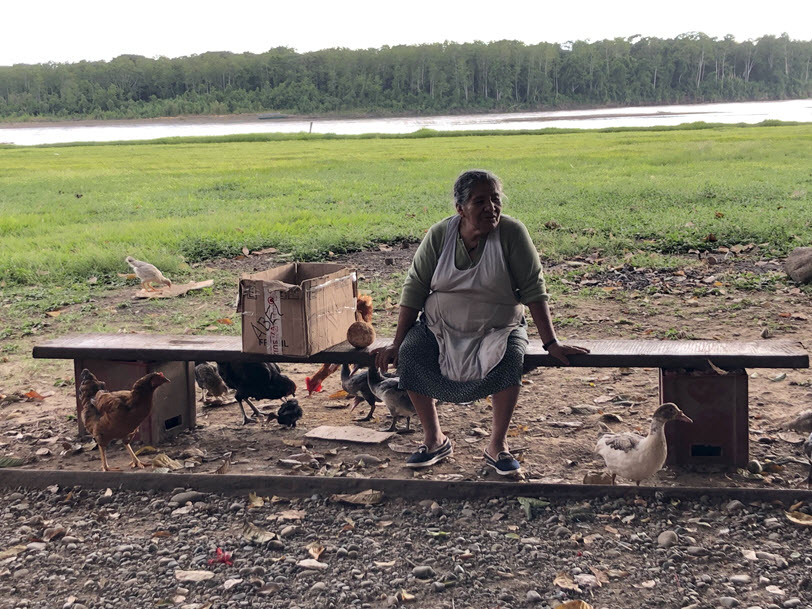 Abuela sits with her feathered flock 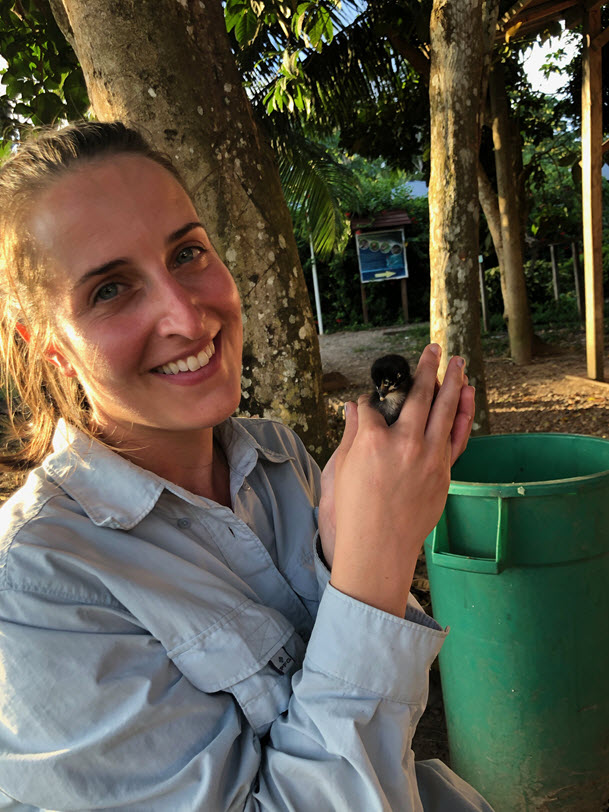 Me with one of the chicks

Every evening, I watched soap operas with the local girl, Yaneth, who ran the abuela’s store. If it was a week night, we would watch two soaps back to back: Huérfanas (“orphans”) at 6pm and Kara Para Aşk at 7pm. Interestingly, they were both Turkish television series that had been dubbed in Spanish. The television was mounted in the upper corner of the store and, as in all the other stores, the storefront was open, so locals would come grab a chair, sit and watch. Francisco (“Pancho” or “Panchito”), our boat driver, watched the shows as well, and he became even more invested in the series than I did.

Pancho is quiet and incredibly warm. It is amazing how he navigates the river, especially after a rain event, when entire trees are barreling down the river. His memory is also astounding, remembering not only where all our sites are, but where all the July and August sampling sites were as well.

Every boat driver has an assistant who helps dock and tie up the boat. Pancho’s assistant, Ramiro, became an integral part of our sampling team. Ramiro helped Jackie and me with all the sampling and did the most labor-intensive work, like coring the trees. The trees were so incredibly hard that Jackie and I would have been physically incapable of using the manual corer to collect our samples.

Ramiro not only played a key role in our sampling but in our day-to-day lives. He was frequently the middle man when communicating with others, he took us on walks through the forest, and he even went with me to the health post. 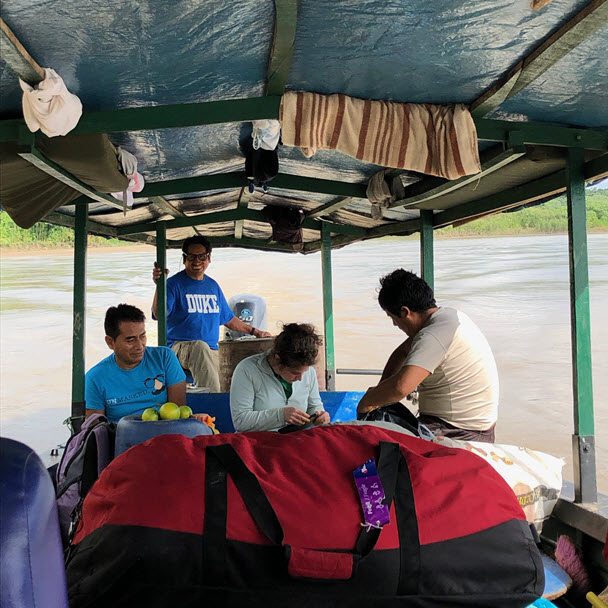 Ramiro (far right) helping Jackie (center) with our depth sensor. On the left is a Boca Manu local
who was hitching a ride with us to Boca Colorado, a mining town downstream. In the back
is Pancho, driving the boat and proudly wearing the Duke t-shirt we brought him for Christmas.

For four weeks, I ate every meal and spent the majority of my days with Pancho and Ramiro. They were my favorite part of my trip to Madre de Dios, and it was hard to say goodbye. However, I know I will be back to Peru one day, and I hope to see them again. 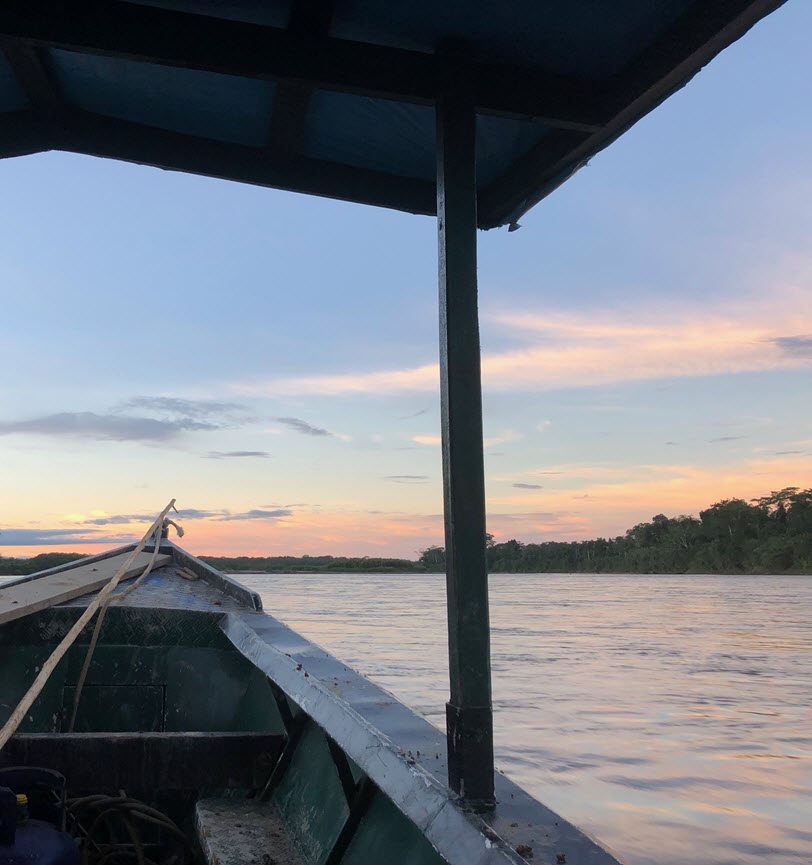 I am extremely grateful to Bass Connections for giving me this opportunity. I had such an incredible experience. I traveled to a place and did fieldwork that I never would have done if not for this Bass Connections project. Although the Peruvian Amazon, with its unrelenting heat, humidity and biting insects, was not kind to me, the people were, and I will miss them terribly. I will miss the boat, the wind on my face and the ever-changing, yet ever familiar, Madre de Dios river.