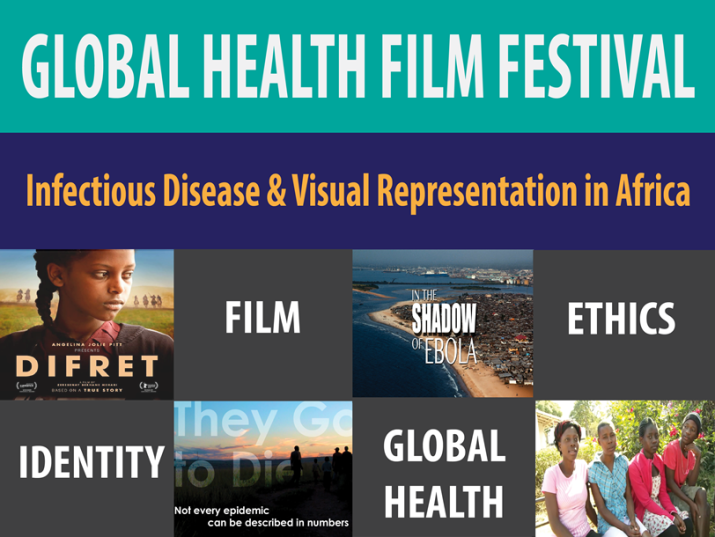 Duke University will host its first-ever global health film festival from Monday to Saturday, February 22 to 27, at a number of locations on the Duke campus.

Centered around the theme “infectious disease and visual representation in Africa,” the festival will show films about tuberculosis in Swaziland and South Africa, Ebola in Liberia and humanitarianism in Africa. Event highlights include the United States premiere of “Chiedza’s Song,” a documentary about adolescent HIV in Zimbabwe, and the North Carolina premiere of “Difret,” a film about early childhood marriage in Ethiopia produced by Angelina Jolie.

In addition to film screenings, the event series will feature Q&As with producers and directors, global health storytelling and social media workshops, a panel discussion and guest speakers.

We recently talked with senior global health and journalism major Jamal Edwards, who launched this initiative with Kearsley Stewart, associate professor of global health, to learn more about the festival and their hopes for how it will engage the community.

Inspiration and Support for the Festival

After attending the world’s inaugural Global Health Film Festival last fall in London, part of an initiative started by the Bill & Melinda Gates Foundation, the Lancet, the Royal Society of Medicine and the London School of Hygiene and Tropical Medicine, Stewart and Edwards began scheming about bringing a similar event to Duke and Durham. Edwards, whose senior thesis is “Making Room for Film in the Global Health Community,” was particularly keen on organizing the festival, which he saw as an exciting culminating project.

Film as a Powerful Medium for Communicating Issues and Driving Change

According to Edwards, the combination of the visual nature of film and our natural attraction to stories renders film an effective education forum that has the potential to move viewers to advocacy. In this age of digital media, visual culture is more dominant than ever before. “Documentary film can transcend the written word,” he said. “It not only helps you build an emotional connection with the characters, but also a deeper, nuanced understanding of other’s lived experiences. And it promotes empathy by bringing you into the action.”

Once you’ve experienced that connection, Edwards suggests, it’s harder to “look away.” The story—with all of its people, images and sounds—becomes a part of you, and you’re compelled to care about the individuals and think about their story in a broader context.

Edwards also warns that as powerful as global health films can be in fostering understanding and positive change, they can also have the reverse effect if not executed with integrity and cultural sensitivity. One of his goals in organizing the film festival is to highlight the efforts of producers and directors who are “getting it right” and creating films that can transform people’s perspective on global health issues.

Infectious Diseases in Africa Is a Timely Theme

Stewart and Edwards chose the theme, “infectious disease and visual representation in Africa,” because stigmatizing stereotypes about poverty, disease and war in Africa continue to shape much of the visual imagery we see about Africa in the United States. According to Stewart, we need new visual narratives about Africa to dislodge old ideas about endless crisis in Africa.  “All of the films we chose for the festival,” she said, “challenge viewers to consider a new perspective on infectious disease in Africa—a perspective that places African agency at the heart of the story.”

In addition, the festival theme is especially timely as it follows on the heels of the 2014 Ebola outbreak and the strong emphasis on Africa in the recently-released United Nations’ Sustainable Development Goals.

And with the Duke Africa Initiative as a key partner in the project, Stewart and Edwards wanted to ensure that the festival lineup aligned with their programming as well as a global health focus.

Edwards is passionate about broadening people’s perspective around the concept of global health. He hopes the festival will prompt people to think and talk about what stereotypes exist, what perceptions perpetuate stigma, how we can challenge these notions and how these films might help us conceptualize new interdisciplinary ways to address global health issues. He also hopes the festival underscores the importance of the human experience in exploring global health issues.

A secondary goal of his is to inspire festival participants to tell their own global health stories in a responsible way. “Just as DGHI teaches research methods, there are clear guidelines for storytelling and film that help the storyteller convey accurate depictions of reality,” he notes. “That’s why we’re including expert-led storytelling and social media workshops as part of the festival. We want to give people tangible tools to take into the field.”