An Idea Born in the Classroom Gets Closer to Reality 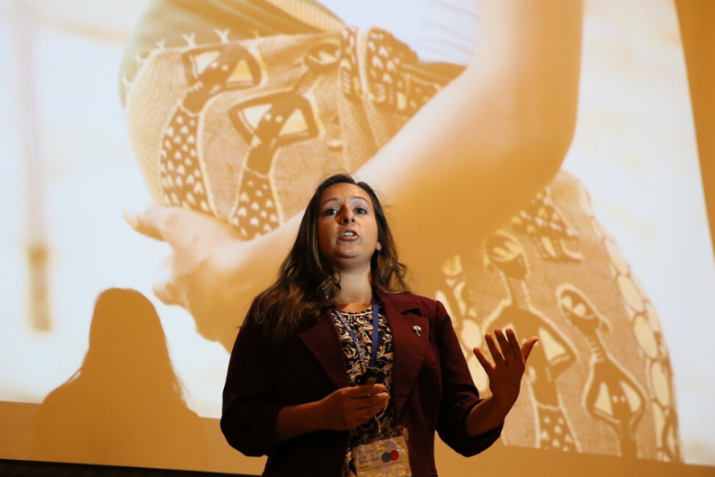 Denali Dahl, MS-GH'17, is working with former DGHI classmate, Happy Ghosh, to bring a preeclampsia self-test strip to pregnant women around the globe, in the hopes of reducing maternal and newborn child deaths due to high blood pressure complications.

When Denali Dahl and Happy Ghosh sit down to talk about the at-home preeclampsia test strip they’re developing, they like to know who they’re talking to. If you’re an investor, you’ll hear about the scope of the problem, how every woman who becomes pregnant is at risk for developing the condition and is a potential consumer.

But if you’re in global health, you’ll hear something more heartfelt, stories that hint at the humanitarian roots of their invention. They’ll point out that millions of pregnant women from rural America to sub-Sharan Africa don’t have access to good prenatal care, and for them, preeclampsia can be dangerous, even deadly.

“We’re sort of bridging two different worlds,” says Dahl, who like Ghosh graduated from DGHI’s Master of Science in Global Health program in 2017. “There’s the business world, focused on profit and market potential… When appealing to global health it’s the impact.”

If caught early, preeclampsia in pregnancy can be easily and inexpensively treated with magnesium sulfate, aspirin, or even diet and lifestyle changes. But its symptoms are subtle and sometimes overlooked, especially in low- and middle-income countries where pregnant women may have only a single prenatal appointment. When it’s not detected or treated, the condition can result in serious and sometimes fatal complications for the mother and her unborn child. Nearly 76,000 mothers and 500,000 babies worldwide die from preeclampsia and related pregnancy disorders each year.

Through their startup company, Kalia Health, Dahl and Ghosh have developed a test strip that uses protein-based biomarkers to detect the condition in a mother’s urine. While other test strips for preeclampsia exist, theirs is the first that can be used at home to definitively diagnose the condition.

The strip’s ease of use and clear results make it a compelling option for low-resource countries, where women could use it to self-screen for preeclampsia without a medical professional’s help.

Dahl and Ghosh became aware of the issue during a course at Duke taught by William Reichert, a professor of biomedical engineering and global health. Reichert had just returned from a Fulbright Fellowship revamping the biomedical engineering program at Uganda’s Makerere University. For a group project, he brought Duke and Makerere students together to identify and solve a pressing healthcare challenge.

Dahl’s group focused on preeclampsia. They wanted to find out why something preventable and treatable had such a high burden of disease.

In Uganda, the answer was time; because of access, resources or awareness, women don’t get to the clinic early enough to stop the condition from becoming severe. The team developed prototype self-test strips calibrated to give a binary yes/no diagnosis. But Dahl realized it would take far more study and effort to actually bring the test strip to market.

Dahl has no fear about taking risks: As a high school student, she took off to Laos to train as an elephant handler, and today she dabbles in chain-saw art. And so she dove headfirst into the challenge of turning the promising idea into a real-world product.

“This company is the product of her drive to just jump in and do stuff,” attests Ghosh. “She’s been doing that since day one.”

Dahl and her classmates from Makerere applied to innovation competitions and for student grants. The group won the Duke ChangeWorks social entrepreneurship competition, then the Big Ideas at Berkeley annual contest and a chance to compete in the grand prize pitch competition.

Suddenly, Dahl had a lot of funding for what was still pretty much just an idea. Becoming a startup seemed like the smart choice for getting access for more mentorship, accelerator support and investment.

“I’d never wanted to run a business, but it provided an avenue to most quickly translate an idea to impact,” says Dahl. “It opened up doors for resources we hadn’t considered before.”

When Ghosh joined Kalia Health (originally called MoyoMedical) in 2017, she took on much of the clinical and market research. The team won two Innovation Corps grants from the National Science Foundation to conduct interviews with doctors and mothers, doulas, midwives and insurers in the U.S., Uganda and Nigeria.

The pair also worked with the Diagnostic Consulting Network to advise them on material selection and assembly processes. Now, they are putting all the pieces together. They hope that additional partnerships this year will let them expand their clinical research and ramp up their urine sampling capacity, gathering more robust data that will allow them to more perfectly calibrate the test strips.

“I think it would be awesome to find and partner with groups who are already targeting and working with women to advocate for themselves,” says Ghosh. “Not that the burden should be on those women, but it often falls to them to get the care they deserve.”

Dahl and Ghosh hope that within the year they can develop a robust prototype that is ready for clinical evaluation whether in Uganda, Nigeria, or even rural North Carolina.