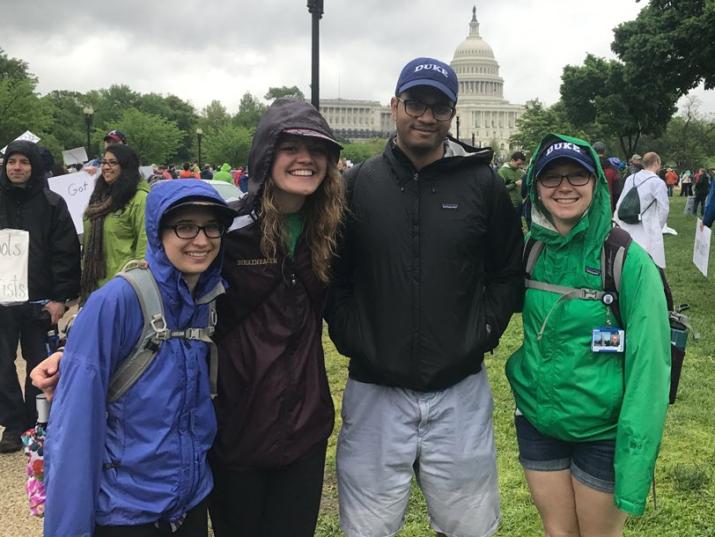 MSc-GH students (from left) Margaret Lillie, Laura Borkenhagen, Arun Augustine and Sarah Philo at the March for Science in Washington, D.C. on April 22.

The March for Science was recently described as an unprecedented and historic event. While scientists have marched in the past, this is the first time scientists and their allies marched to protect its very identity.

Movements that cast doubt on science have been growing for years, and recently this skepticism has influenced politicians to support policies that contradict scientific evidence. This is not a new problem, but it is one that thousands of people all over the world realized they could no longer ignore.

While we all marched for different reasons, the common thread uniting us was pride in our work and a desire for science to influence policy for the common good.

When I saw the birth of the science movement in January in the wake of the Women’s March, I immediately knew it was something in which I wanted to participate. I felt called both as a student of global health and a lover of science to act. I’m fortunate to be enrolled in a program with other students who felt called to take part in this movement as well.

Our futures are dependent on the accessibility of our research. We all aim to use scientific knowledge to cultivate evidence-based policies and programs that will decrease health disparities throughout the world. Far too often it seems that we will be unable to do this in the current political atmosphere as people move beyond a healthy level of skepticism to complete distrust.

Unfortunately, some of this distrust is our own fault. Our inability to communicate the results of our work effectively to the average person makes it difficult for them to understand what we found and why it’s important. While reflecting on our biostats courses this year, one of my classmates said she is thankful that she can read a scientific publication and fully understand the results. We will never be able to change health systems if people need some level of graduate studies to understand what we found.

Two goals of the march resonated strongly with me and my decision to march.

The first is to humanize science. We don’t engage in science to advance a political agenda, but rather to understand more about the world in which we live. Hopefully, that understanding can one day lead to positive change. It’s true that science has not equally benefitted everyone in the past. As global health students, we hope to use our knowledge to decrease these disparities and show people the positive outcomes that science can have on others’ lives.

The second goal to which I related strongly is to advocate for open, inclusive and accessible science. My first-year classmates and I have spent an entire semester in the global health ethics course attempting to grasp how our research will affect the communities in which we work. This is only possible through open, equal, and honest communication with our collaborators. There is also an expectation that we will advocate for people who do not have the ability to convey what they need to policy makers. We must push for evidence-based policies that support the health of low and middle income communities.

We finished the march near the Newseum on Pennsylvania Avenue, a museum dedicated to promoting, explaining and defending the First Amendment of the United States Constitution. We can march and come together to advocate for science because of the protection granted by this amendment. 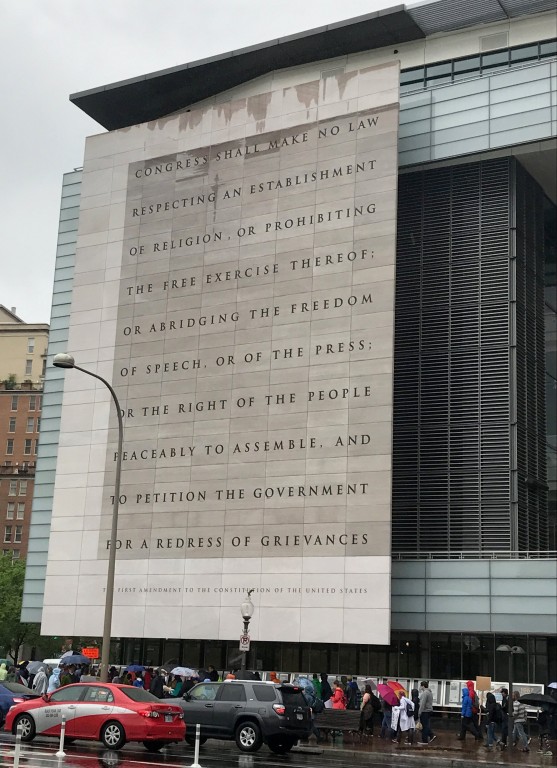 The first amendment is etched into the side of the Newseum.

Throughout the march, I was moved by the sheer number of people who felt similarly to me and were able to remain so positive. It’s easy to become discouraged with the negativity in our country. But, despite the threats to our funding and widespread lack of belief in our findings among politicians, public figures and citizens, we all felt this march had value. Moving forward, I hope to carry this positivity with me.

In the words of Bill Nye (“The Science Guy”) from his speech at the march:

Science is universal. Science brings out the best in us. With an informed, optimistic view of the future, together we can, dare I say it, save the world!