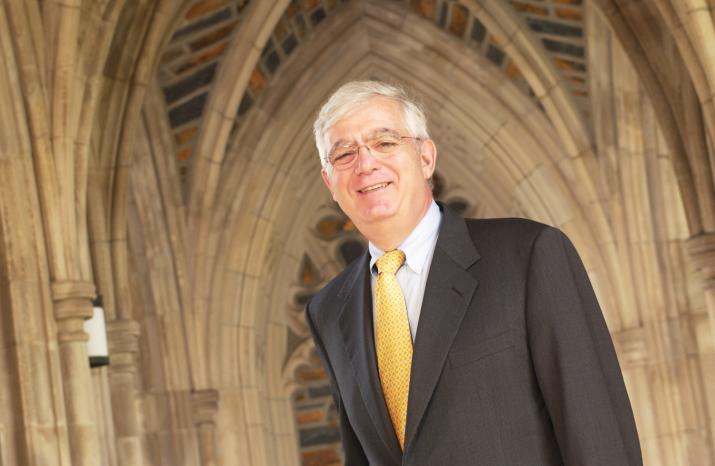 Buried in the bowels of Trent Drive Hall, amid scaffolding and buckets of paint, lies the start of Duke's $30-million Global Health Institute.

Although the beginning may not be glamorous-with only three staff members and a handwritten paper sign scotch-taped to the wall bearing its name-newly appointed director Michael Merson has grand ambitions for the institute, both in Durham and across the globe.

The GHI launched in April and arose out of the University's refocused approach to global health disparities, which President Richard Brodhead identified at the beginning of the 2005 academic year.

Merson began his term as the GHI's director Nov. 1.

Abroad, the institute plans to organize the development and management of University-affiliated sites in developing countries.

Merson, who plans to use the report to guide the institute's progress, said some of these objectives will take time.

"I'm trying to meet as many people as I can and then have meetings with the committee-I'm sure they'll help guide the strategic planning process," he said. "I'm giving myself six months to define what the major thrust will be of the institute."

Merson said he also hopes to implement other aspects of the institute's mission, including expanding global health internship opportunities and eventually making the undergraduate program into a major.

In addition to specifically outlining the institute's mission, Merson said his first year will also focus on faculty hiring and fundraising.

Merson has an extensive background in global health issues-prior to coming to Duke, he served as the director of a global health AIDS program for the World Health Organization in Geneva. While in the position at the WHO, Merson oversaw a staff spread across 85 countries.

In 1995, however, Merson decided to adopt a more stationary lifestyle and became dean of Yale University's School of Public Health. Both of the positions gave Merson valuable experience that will help him tackle the challenges that lie ahead for his directorship, he said.

Merson explained that despite the gargantuan task that sits before him, there were many reasons he was attracted to the position-such as the GHI's unique position among other academic institutions.

Schools including Johns Hopkins University and Vanderbilt University have global health programs, but none have the dual focus of research and outreach that Duke has, Merson said.

He also pointed to the centralized geography of Duke's campus, which allows for easy interdisciplinary cooperation and Duke's prioritization of global health issues.

"I was also attracted by the theme of health disparities," Merson said. "The world can no longer be allowed to exist half-health and half-sick-the only way we're going to change that is if we deal seriously with health disparities."

Although Merson will probably find himself revisiting his old home aboard "Swiss-Air 16-B" as he works to expand Duke's global health efforts, he said working within Durham will be a priority as well.

"I would hope what this institute would do is to be a partner in efforts that Duke already has underway to improve the health of the population of Durham and the surroundings," Merson said.

"We need to find our role and our niche and where we can make a difference," he added.