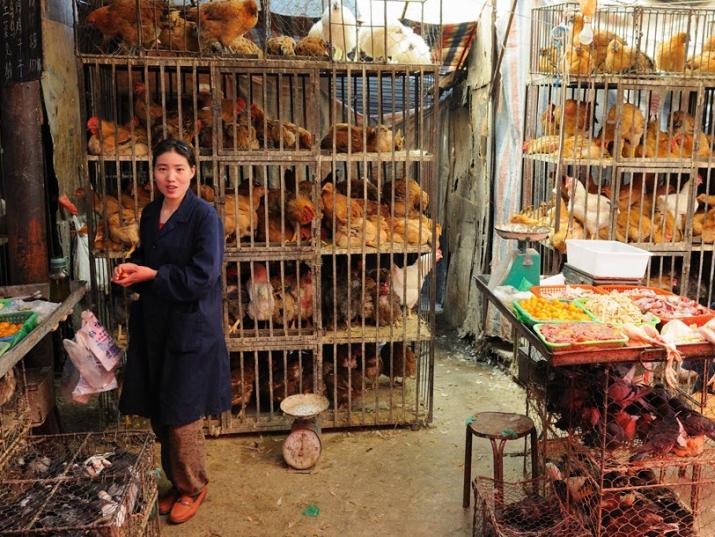 Human cases of H7N9 have been largely traced to exposure to the virus at live poultry markets like this one in Xining, China. Photo credit: M M (Padmanaba01), via Wikimedia Commons.

In a fifth wave of human illness since their discovery in 2013, H7N9 avian influenza viruses in China have recently evolved to cause more severe disease in chickens and more human cases than in previous waves. In January 2017 alone, as many as 79 people died from H7N9 bird flu in China—a count four times higher than the same month in past years.

Until recently, H7N9 virus infections caused few signs of infection in domestic chickens and ducks, enabling the viruses to spread swiftly and silently throughout a number of Chinese provinces. Poultry infections were often only detected when farmers or veterinarians conducted a random test on flocks. And with no visible symptoms, bird owners may be tempted to skirt reporting rules and continue to sell infected poultry at markets. Now, the virus or family of viruses has changed, alarming public health and veterinary heath officials.

Human cases of H7N9 have been largely traced to exposure to the virus at live poultry markets in mainland China. To contain the virus, public health officials have been working to shut down live markets in certain areas and cull poultry infected with H7N9.

For now, H7N9 is thought to be relatively difficult to spread between humans, but there are concerns the virus could adapt. This week, we talked with Gregory Gray, professor of medicine, environmental health and global health, to get his perspective on controlling the H7N9 outbreak and the importance of a One Health approach.

How is this outbreak similar to or different from China’s H7N9 bird flu outbreak in 2013?

This fifth wave of human H7N9 influenza A virus infections in China is alarming because the number of humans affected is significantly higher compared to the 2013 outbreak. There’s growing evidence that the current virus has become more virulent to chickens and is more widespread among chicken flocks in China.

Fortunately, with very few cases of human-to-human H7N9 infections so far, it appears the virus has not yet adapted to people. However, the threat of adaptation remains.

What have we learned from the 2013 outbreak that may help us understand and address the current outbreak?

Closing live bird markets helped control the 2013 outbreak, and Chinese public health and veterinary health officials are currently mandating such closures again in H7N9 hotspot areas in an attempt to reduce infections in humans and birds. There are also ongoing efforts to develop and use H7N9 vaccines among poultry in China.

What do you see as the likely trajectory for the current outbreak?

It is difficult to project, but fortunately, the last four human H7N9 waves have been largely confined to China and declined over time. The hope is that this fifth wave will be similarly contained and decline relatively quickly.

What type of bird flu research is Duke engaged in?

One Health research team members at Duke, Duke-NUS and Duke Kunshan University are continuing to collaborate with international researchers to study avian influenza and other zoonotic pathogens that may move from animals to humans.

The bulk of our active zoonotic pathogen work takes place in China, Malaysia, Mauritania, Mongolia and Vietnam. For instance, Qianli Wang, a postdoctoral fellow at Duke Kunshan, received a Chinese National Science Foundation grant to study avian influenza in Chinese live bird markets. And I recently received a National Institutes of Health grant to study pig workers and pigs in China for swine influenza and other viruses.

How can the One Health approach help us understand and address bird flu outbreaks?

When public health and veterinary health problems become intertwined as they do in avian influenza, they are particularly difficult to control. Containment often requires multi-faceted interventions with competing interests.

For instance, closing live bird markets in one location may reduce human and bird infections in that area. However, due to economic pressures on the agricultural sector, market closures have sometimes just led to the movement of livestock to other geographical areas and thus furthered the spread of the pathogens.

The One Health approach requires that the various partners—public health, veterinary health, agriculture industries, and so on—conduct research, plan and execute control interventions together to avoid such exacerbations. Often, solving these problems requires an interdisciplinary team.