Meant for faculty and students, it also can be used by anyone in any shared room, Duke researchers say 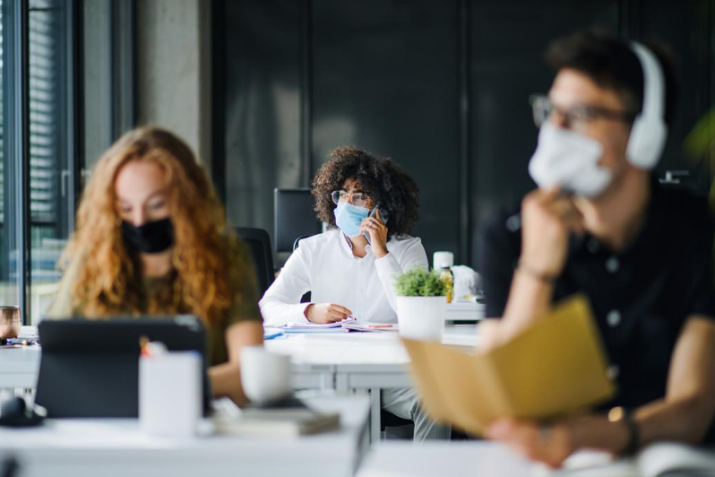 If you’re heading back to work in a lab, classroom or office, or to live in a dorm room this semester, you’re probably feeling some level of concern about virus transmission. A new tool developed by Duke researchers may help faculty, students and staff who plan to return to campus to assess COVID-19 transmission risk if they’re sharing space with others.

Created by Prasad Kasibhatla, John Fay, Elizabeth Albright and DGHI’s William Pan, with help from Jose Jimenez, a professor of chemistry at the University of Colorado, the tool predicts airborne concentrations of the virus and the odds of transmission from microscopic infectious airborne particles (referred to as aerosols), the developers said.

Kasibhatla and Pan talked with DGHI about the tool and how it could help contribute to COVID-19 prevention measures, and even be used to reduce other types of infections that spread through aerosols.

Using a mathematical model, it takes into account “known” and “uncertain” factors to predict estimated risk. Known factors include the number of faculty and students in say, a classroom, as well as the number of in-person class sessions, the floor size and the height of a room. Uncertain factors include the percentage of faculty-age people in the community who are infectious, the percentage of student-age people in the community who are infectious, mask use, a room’s air ventilation system, virus removal rate related to other control measures such as HEPA filters and the inhalation rate of students and faculty per minute.

“The tool was meant for evaluating risk of COVID-19 aerosol transmission to students and teachers, but it actually also works for anyone in any shared room,” said Pan, associate professor of global and environmental health.

Kasibhatla, an atmospheric scientist whose work focuses on outdoor air pollution, including aerosols, led the team that developed the tool. Professor of environmental chemistry and director of undergraduate studies at Duke’s Nicholas School of the Environment, he said that while the World Health Organization has been a proponent of masks, handwashing and social distancing to help reduce virus infection rates, the international health organization has been “a little slow to adapt to the fact that aerosols may play an important role in transmission, too.”

“In the last few months there has been increasing evidence that transmission of COVID-19 by aerosols containing the virus might be an important mechanism under certain conditions,” he said.

As the months wore on and discussions of returning to campus were happening, Kasibhatla said, “I began thinking, ‘What kind of concentrations would I breathe in in the classroom?’ A colleague of mine was doing the same thing and was putting factors into a spreadsheet based on single estimates.”

Kasibhatla thought he could improve the spreadsheet by adding estimates of uncertainty, and he started discussing his ideas with Pan and Albright.

“Around the same time, Fay joined the team and started creating a web dashboard that mimics my spreadsheet,” Kasibhatla explained.

Their goal was to give individual faculty and students a way to get a rough estimate of their risk and to allow them to explore ways in which they could reduce their risk. Both Kasibhatla and Pan believe the tool could be very useful for many on campus and in other education settings and offices. Kasibhatla would like to see all of Duke’s deans utilize the tool in their schools “to get a sense of overall risk” and share that information with students and faculty.

The tool could also contribute to the debate about K-12 school re-openings. “For example, I read that Duke Clinical Research Institute has entered into a relationship with Durham Public Schools to advise them on this issue. I wrote to them and told them they can use this tool to get a sense of infection risk in their settings,” said Kasibhatla.

Pan believes the tool could be a positive contribution.

“The Duke Compact compels us to undergo testing, report symptoms, wear masks, social distance and hand wash, among others that mitigate risk on campus — but where are all the fundamental risk calculations? If we are signing a compact to ensure the Duke Community is safe, shouldn’t we also see how our data will be used to analyze and evaluate risk? Isn’t this a fundamental aspect of building community trust? I think our tool is a simple example of how to be transparent,” Pan said.

Other universities developing similar tools include Cornell and UCLA, said Kasibhatla, noting that they have made their methods freely available online.

Kasibhatla is not worried about getting back into the classroom.

“I’m still comfortable teaching in person. My estimates are that my classroom will be a pretty controlled environment and ventilation rates seem to be good. We’ll be social distancing and wearing masks.”

But Pan plans to teach only virtually because his fall course combines UNC, NC State and Duke students. “I might have been uncomfortable teaching in person with students from all three universities coming together,” he said.

Kasibhatla said he hopes their tool can be used to evaluate COVID-19 risk in enclosed spaces like prisons and hospitals, too. And it could also be used for other infectious diseases, such as influenza.

“The medical community is still very much focused on transmission through people coughing and sneezing and people coughing or sneezing on surfaces and transferring virus from those. But there is increasing evidence that COVID-19 is spread via people talking, singing and in a lecture room. For example, the Washington choir outbreak is believed to have been driven by aerosol transmission,” he pointed out.

Pan added, “We need to get the word out. Historically speaking, whenever a disease has overlap between environmental and clinical scientists, MDs have leaned heavily on a clinical approach to controlling disease. But the environmental aspects can be equally important to preventing infectious disease and it’s not used enough as an intervention tool. Planetary Health and One Health are examples of areas where we are improving this dialogue with medical scientists.”