Not Your Ordinary Spring Semester

Hopscotching from China to Germany to the US during the pandemic, one busy faculty member pauses to talk about his recent journey 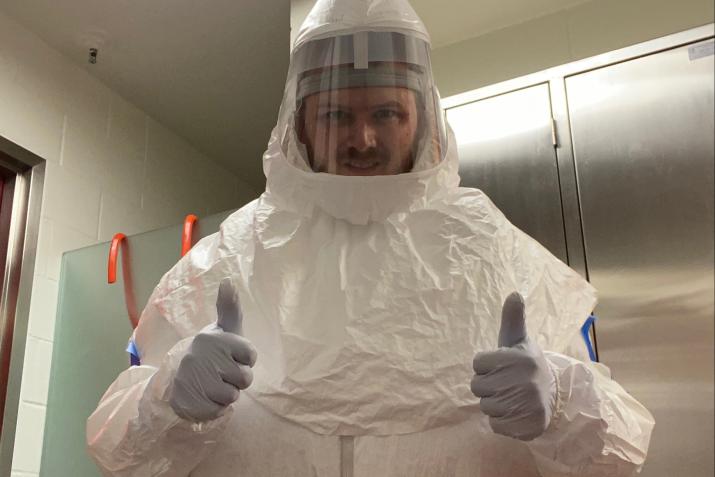 Decked out in personal protective equipment, Ben Anderson, assistant professor of science and global health at Duke Kunshan, is pictured here in a lab at work. (Photo courtesy of Duke Kunshan Communications)

Benjamin Anderson lives in Suzhou, China, with his family, but when the COVID-19 pandemic took hold there, his day-to-day life shifted dramatically. This month, the emerging infectious disease scientist and assistant professor of science and global health, spoke with DGHI, sharing both a personal and professional perspective about recent events.

First, tell us about where you live and work in “normal times.”

I work at Duke Kunshan located in Kunshan, China, in the Jiangsu Province. It’s considered a high-tech city, one of the fastest growing economic center cities in China.

Have you been there long?

I first started working in China as part of my master’s in public health degree — on a project with the Chinese Center for Disease Control and Prevention, in 2012. I worked with their influenza group. I was at Duke as a post doc, working with Greg Gray, who has been a mentor of mine for 10 years. I ended up doing my dissertation on emerging infectious disease in China.

When it was time to move into academia after my dissertation, Duke Kunshan was hiring and it seemed like a natural fit to go that direction and become a full-time faculty member. That was in 2018. My wife and our two small kids moved over with me and it’s been great.

What was it like being in Kunshan when the pandemic began?

Each province has responded in different ways. Jiangsu Province had its own policies, though many were coordinated nationally.

When the outbreak started progressing — early reports started hitting the news January 7th through the 10th — people were paying attention a little. It was not considered overly serious until a week or so later. Then it was clear there was something very significant going on. Shortly after that, around the 22nd, the Chinese government implemented travel restrictions in Hubei, and then began limiting travel outside of Wuhan, China. There was a mass quarantine by late January. At the same time, the university [DKU] also announced it was suspending classes.

How were you affected?

The travel restrictions did not hit our province right away. A lot of Kunshan people were away traveling for Chinese New Year around that time. My wife and kids were in Germany at that time visiting family during their school break. I was back in China and was going to rejoin them for Chinese New Year. Things started to evolve and we realized at work that DKU was going to shut down. I ultimately caught one of the last flights over to Germany.

What measures were put in place in China before you left?

I was there through January 29th. What we started to experience was the implementation of certain control measures happening on the ground. Those included activities around neighborhoods, and travel measures.

We had some measures in our neighborhood… a lot of temperature screenings. But epidemiologically, it wasn’t’ really known then that there were asymptomatic cases. Based on what we knew about past coronavirus cases, fever was present. Even as I traveled to the airport to fly to Germany, I had to have my temperature screened at two checkpoints, and my driver had to be temperature checked.

It’s interesting to compare China and the U.S. response.

Experiencing public health measures in China is different than in the U.S. In the U.S., there’s this clash of public health versus the American ideal — liberty, freedom, separation from government. That conflict may not help public health.

In China they have a political and social structures where they’re able to implement things in a different way. It was such an interesting thing to witness. There are such amazing things about China and society there. We love our community, our neighbors, our friends there. The commonality of humanity is that everybody wants to just live in peace and have healthy lives and children and go to school and have opportunities. But our experiences achieving those things in the U.S. and there are so different.

They had testing very quickly. The provincial CDC was the first one to manage all of the testing for our province. There was a little delay in getting results back at first, but then they quickly expanded to where they were able to do pretty impressive testing. It was a night and day difference from the U.S. and some other countries.

In the U.S., states have a lot of independence about how they operate their health measures. So there can be more difficulties in coordinating across states. In China, everything is flowing from a centralized government structure which makes it easier to implement government policies. And also, they’d had SARs [in 2002-2003], which really changed the health infrastructure at that time and this tested that new infrastructure and in my personal opinion, it worked.

There are some reports here in the U.S. that the Chinese government knew about the novel coronavirus long before they informed the public.

My sense of what I know about the public health infrastructure in China is that when the central government, the national government, found out about it — and their director is someone we know well in the epidemiology community there — that as soon as they heard about it, they went into action. They released genomic information and began manufacturing testing kits. Being able to ramp up testing in a matter of weeks for a population of 1.4 billion people is no small feat. And they were very communicative regarding policy announcements. The provincial government was very good about communicating any changes. We also get a lot of information through Weibo, a popular Chinese social media platform.

And as far as Duke Kunshan went, the Ministry of Education was in communication with the university, sharing updates regularly. We had a task force and we have a person who works in our university who coordinates through the local government office. We were getting pretty consistent information about what the changes were.

After you met up with your family in Germany, what did you do?

Our leadership at Duke got involved with DKU and made it possible for us — the DKU faculty — if we could and wanted to, to come back to Duke and help transition DKU courses to online teaching. We came back to Durham in February and my family has been renting an Airbnb here since then. The kids have learned some resilience, to say the least.

Are things getting back to normal in China yet?

Things started to be deemed under control but because of people traveling to China, they were bringing it [the coronavirus] back to China on airplanes. And so, a couple weeks ago, the Chinese government imposed a ban on all foreigners returning to China. There’s a report that they may be thinking of changing those restriction rules soon though, particularly for businesses, but we’re not sure.

What class are you currently teaching?

We are teaching a class right now for Duke University students, for Summer Term 1, about the novel coronavirus and we are looking at these cross-national comparisons. We first offered this course to DKU students in their final session of last semester. People want to do these types of comparisons and I think it is important to contextualize all the factors that are unique to a country, and even subparts of a country.

I think my overall impression is that one surprising thing is that the media, with exceptions, has done a pretty decent job – the national and international media. There are exceptions… but they have done a really good job describing the facts and explaining how unprecedented it is and the need for knowledge.

Also, we are still learning about the virus now. And it’s very interesting to see how decision makers and people in positions of leadership have handled the virus. Overall, I think people looked at China implementing Draconian measures and quarantining millions of people, but look at them now. They are getting back to work.

There are lessons learned from every country. Some things that were and were not good in every country. For me, it’s going to be interesting to see how we can use what we’ve learned to make broader changes to policy and infrastructure to prevent the next pandemic from happening.