Op-Ed: The Odds of a Devastating Pandemic Just Went Up

Global health and public policy professor Gavin Yamey responds to reports that the Centers for Disease Control and Prevention (CDC) is planning to let lapse $600 million in funding to combat global outbreaks. 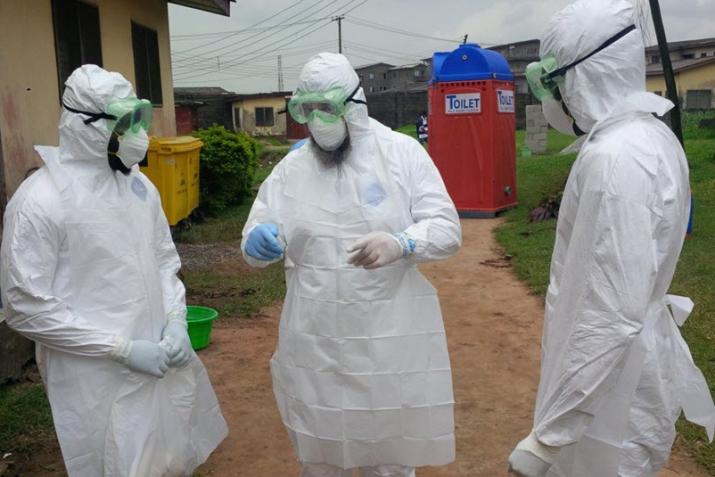 Nigerian physicians being trained by the World Health Organization (WHO) on how to put on and remove personal protective equipment to treat Ebola patients during the 2014 Ebola outbreak. Photo by CDC Global via Wikimedia Commons.

A few days ago, I joined several thousand global health practitioners, researchers, activists and policymakers at a conference in Bangkok titled “Making the World Safe from the Threats of Emerging Infectious Diseases.”

The audience was abuzz about a new study by a team of economists—including former U.S. Treasury Secretary Lawrence Summers—that shows the staggering economic costs of a future pandemic. They estimate the annual losses from a moderate to severe pandemic would be about $500 billion, or 0.6 percent of global income. That’s similar to the annual costs of global warming, double the cost of natural disasters and five times the cost of terrorism.

These new estimates are much higher than previous studies have suggested, and they point to the need for us to step up our efforts to prepare for the next pandemic. So it was troubling to learn that the Centers for Disease Control and Prevention (CDC) is planning to scale back efforts to prevent those very diseases.

The CDC’s actions come amid expectations that the U.S. will let lapse $600 million in funding to combat global outbreaks, which was appropriated in 2014 at the height of a catastrophic Ebola outbreak in West Africa. Yet there is considerable evidence that this emergency funding worked. In West Africa and other parts of the world, the CDC has trained disease detectives to diagnose, prevent and contain outbreaks.

When Ebola again began to spread in the Democratic Republic of the Congo last year, health officials, including those trained and supported by the CDC, were able to act swiftly to contain the virus, saving lives and preventing what could have been a massive disaster.

To end this funding now would be like a homeowner, having just been spared from a fire by a smoke alarm, deciding to disconnect the alarm.

We’ve made this mistake before. It’s relatively easy to garner support to fight infectious diseases when they are rampant and capturing our attention, but too often the motivation to sustain funding wanes when the infection appears to be under control. Peter Sands, executive director of The Global Fund, argues that our approach to fighting infections is characterized by “cycles of panic followed by neglect.”

Global health history is full of such examples. In a study that I co-authored, we found 75 episodes of malaria resurgence, where in most cases countries had successfully controlled malaria, only to have it come roaring back once they cut their malaria programs.

This is why the findings by Summers and colleagues are so urgent. When economic losses from a pandemic are expected to exceed $500 billon per year, penny-pinching on our funding to prevent outbreaks is glaringly short-sighted.

Perhaps most curious is the CDC’s reported plan to deal with dwindling resources by downscaling efforts in 39 of the 49 countries where this funding is currently deployed. Most pandemics begin with a spark—a pathogen jumps from domesticated or wild animals to humans. And yet the CDC plans to lessen its vigilance in some of the most likely places in the world for that spark to occur, countries such as China, Pakistan, Haiti, Rwanda and the Congo.

Pandemics know no boundaries. That is especially true now, when factors such as international travel, climate change, deforestation and human-animal interactions are accelerating the spread of infectious diseases. In our modern age, when an outbreak in a far-off land can quickly reach our back yard, there is no room for territorial thinking. Like ships on an ocean, we rise and fall together.

We cannot make the world safe from pandemic diseases by looking away after an emergency fades, nor by hoping that infectious diseases stay within the borders of far-away nations. It is time for us to end the cycles of panic and neglect and invest reasonably and rationally in outbreak preparedness every day and everywhere. The human and economic costs of inaction are intolerable.

Gavin Yamey is a professor of global health and public policy at Duke University, where he directs the Center for Policy Impact in Global Health.