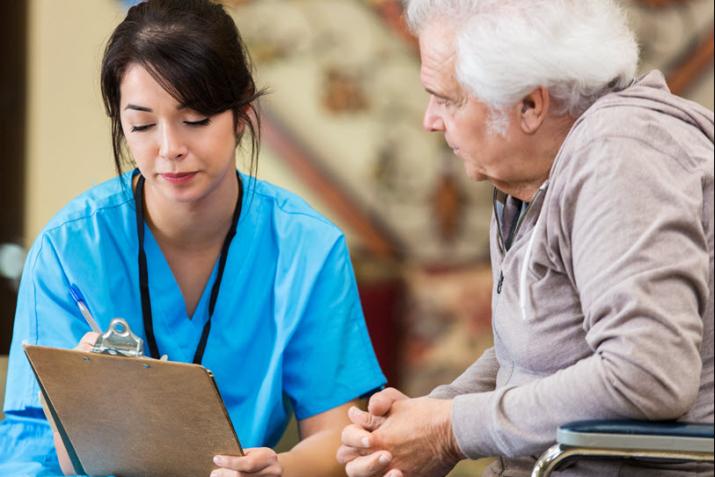 The good news is that people with HIV are living much longer than they used to; it’s estimated that by 2020, 70 percent of people living with HIV in the United States will be age 50 and older, compared to 10 percent during the first 20 years of the epidemic. The bad news? With this longevity come challenges that our healthcare system isn’t prepared to address.

“When I began my career as a nurse in the late 1980s, HIV was pretty much a death sentence,” says Michael Relf, a professor of nursing and global health. “People living with HIV were told, ‘We’ll keep you as healthy as possible, but you need to get your affairs in order.’”

But when combination antiretroviral therapy (ART) was introduced in the mid-1990s, the outlook for these individuals went from bleak to bright. And over time, as ART has become increasingly effective with fewer harmful side effects, the odds of longer survival continue to improve, necessitating a new focus on healthy aging for people living with HIV.

Many people living with HIV have higher rates of risk factors for cancer and chronic illnesses, such as cardiovascular disease and diabetes, than the general population. These factors include smoking, alcohol and drug use and poor nutrition, as well as other factors related directly to the disease and its treatment.

“The sustained inflammation from HIV over time, even when viral loads are suppressed, creates pathways in the body that increase the risk for cardiovascular disease, and some of the earlier antiretrovirals profoundly increased the risk for lipid disorders, insulin resistance and endocrine disorders,” says Relf, who studies HIV and aging.

HIV also heightens the body’s susceptibility to poor bone health. Conditions such as avascular necrosis—the death of bone tissue due to interruption of the blood supply—disproportionately affect people living with HIV and can lead to the need for a hip replacement.

And people living with HIV are prone to cognitive and neurological problems such as earlier onset of dementia. One study found that the epigenetic age of the brain of a person with HIV was more than seven years older than those who don’t have HIV.

But the HIV-related challenges of aging extend beyond physical health. Loneliness, isolation, intersectional stigma and depressive symptoms are common among older adults living with HIV and can negatively impact their ability to access the health and social services they need. “Many people aging with HIV have been socially isolated from their families and communities,” says Relf, who also studies HIV-related stigma. “Many older gay men, for example, lost a significant portion of their social network when their friends and partners died in the early days of the HIV epidemic.”

In fact, insights Relf gleaned through his research on HIV stigma are what prompted him to delve deeper into HIV and aging. When he and his collaborators were studying internalized stigma among women in the southeastern United States, many of the participants reported experiencing different types and sources of stigma as they age. For example, one woman reported tearfully that her son—who had learned of her HIV status as a child and had been supportive of her throughout his childhood—doesn’t allow her to use his dinner plates or go to the bathroom at his house out of fear that his children might contract HIV.

Unfortunately, Relf says, health systems in the U.S. and across the world aren’t ready for the aging population in general, let alone older adults with these unique needs. He’s among the proponents of a holistic approach to helping people living with HIV age successfully. Relf recently co-authored an update to a model that considers the interplay of biological, cognitive, mental and social factors in the aging process for people living with HIV. The model promotes a lifespan perspective that takes into account historical behaviors and lifestyle factors that affect one’s aging process and quality of life as they get older. It also suggests that healthcare practitioners should screen patients with HIV for geriatric problems such as functional impairment and frailty at an earlier age because many of these symptoms occur prematurely in this population.

Nurses, Relf says, are poised to play an important role in improving care for older adults with HIV—particularly in rural areas, where they’re often the sole healthcare providers. “Because nurses who live and work in a community understand the community’s norms, culture and values, they’re well-positioned to help design and tailor effective prevention initiatives, testing and counseling programs, and treatment efforts,” he says. “But often, they’re functioning outside their skill set out of necessity, especially in the global setting.”

Relf is working on changing that. As a member of an expert advisory panel of the Association of Nurses in AIDS Care, he’s helping to create a series of professional development modules for nurses and nurse practitioners on issues associated with aging among people with HIV. The project is one of several funded by Gilead Sciences, Inc., a leading manufacturer of ART, to support innovative approaches to preparing healthcare and other systems to better serve older adults with HIV.

This “graying of the HIV epidemic” also calls for more sweeping changes in healthcare. In an editorial for a special issue of the Journal of the Association of Nurses in AIDS Care, Relf and his co-editors write, “individual-level interventions and redesigns of health care systems will be needed to meet the unique prevention, care, and treatment needs of older persons at risk of, living with, and/or affected by HIV.”

In June 2021, the world will commemorate 40 years of the epidemic, and while significant challenges persist, Relf is hopeful. “Although there is still not a cure, it’s tremendous progress that we’re now focusing on the ‘fourth 90’ to help individuals living with HIV age successfully,” he says.