Perceptions and Realities of Field Research: This is my story 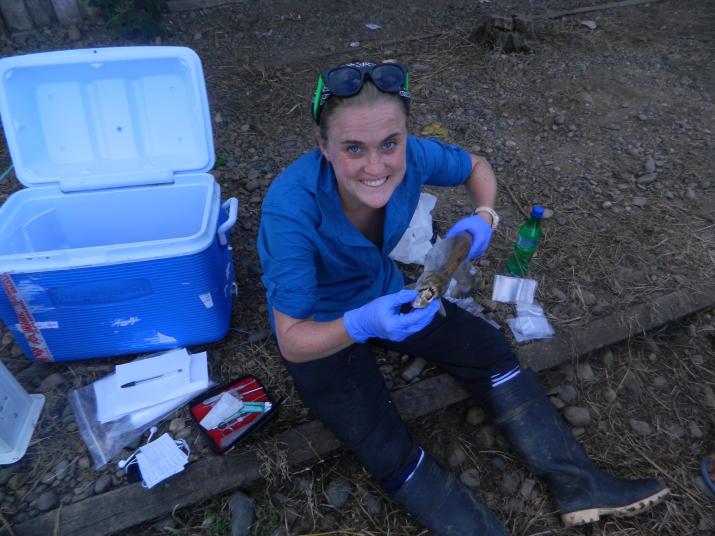 This summer I have been working with the Bass Connections project in the Madre de Dios river in Peru. We have been collecting both human health and environmental samples throughout different communities to examine the impacts of small scale gold mining, most of which is illegal that occurs on the river. The process of extracting gold requires using mercury, which contaminates the environment and accumulates in the fish that people eat. My project has been focusing on collecting fish tissue for heavy metal analysis. This is my story.

Spring 2014 at Duke.
After grabbing a healthy bowl of oatmeal and coffee, I head to lab in the basement of Hudson Hall. A typical day in lab usually began with sorting out the fish samples I was going to analyze for the day. I grab the small fish bags from the freezer and begin to cut the tissue to analyze for total mercury, all while keeping the lab desk relatively clean. After cutting and weighing the fish, I place them in the mercury analyzer and wait a few hours for the machine to run. After my next class, I head back to lab to write down the results and clean up. Overall, days in the lab dissecting fish tissue were relatively clean and simple. How could catching the fish for the lab in the Peruvian Amazon be much harder?

June 2014: Madre de Dios River, Peru.
After grabbing my light breakfast of lentils, boiled yucca, rice, eggs, chicken and instant coffee, I head to the boat to search for Boca Chicos and Chambiras, the two Amazonian species of fish I had planned to collect. After seeing the long list of fish caught the previous year, I assumed that catching four fish from each community we visited would be a breeze. OH was I wrong...Almost every day, Lauren Wyatt, a doctoral student in toxicology, and I would head out on the boat with our motorists who took us to different parts of the river where they believed fish would be. After spending hours on the river fishing with nets and sometimes even a bow and arrow (Our motorist was the Peruvian Katniss Everdeen from the Hunger Games), we often came up empty handed. Some days we were unable to go out at all due to the weather. Who knew fish are very particular about the conditions when they want to be caught? Some days we were lucky enough to catch a few fish; however, this is where I really noticed the differences between the field and the lab. Many of the communities had no tables to work on, so we cut the fish in our laps with fish blood and guts spilling everywhere. Fieldwork was definitely not as easy as I imagined. I now have a deeper appreciation for what it means to actually collect samples from the field.

This project really opened my eyes to what working on a research project really means. There are a lot of things we take for granted in the lab: constant electricity with no fear of power outages, ample clean workspaces, and samples arriving nicely in little bags. In the field, ANYTHING can happen no matter how many itineraries you make or how many precautions you take. The weather doesn't follow any schedule and the fish don't always jump into your net.