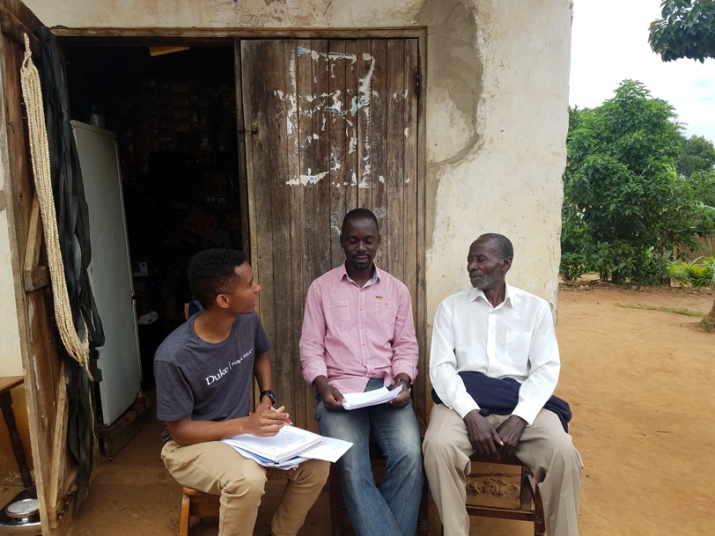 My coordinator and translator, Eddy, and me during a survey as we laugh at a joke being made by one of our research participants.

I want to share so much with you—the good, the bad and the ugly. I want you to see through my eyes—all the light and all the darkness. I want to paint you a picture … but I’m conflicted.

Greetings from Naama Parish, a rural subcounty in the central region of Uganda. Oh, and no, I didn’t mean Wakanda. I’m here with four other students conducting primary global health research as part of a health collaboration that began nine years ago. As of now—our last week of fieldwork—I’ve taken 1,000 pictures to match the over 1,000 special moments of my experience.

In my photos, you can feel the happiness, the pride, the humility and the kindness of each individual in each moment. It’s contagious. It’s inspiring. It’s emotional. But as much as I want to share it all with you, I hesitate to press "share" as I scroll through my camera roll. As a Ghanaian—as an African—I hesitate because I wonder whether the world sees the same beauty that I see in these photos, especially when it hears that my photos were taken in "Africa."

Truth is, there is poverty in this community. Behind the smiles of individuals in many of my pictures, there are dilapidated houses or broken windows or dirt roads or torn clothing. These parts of the picture draw the eye and distract from the full story behind each moment. They reinforce stereotypes that are partly true but entirely incomplete. They are weaponized against Africans around the world to suggest that we are poor, helpless, unintelligent and less than.

With my time in Uganda coming to a close, I’ve been thinking a lot about how to tell the story of my experience. Should I only share those moments that run counter to the single story of Africa to sort of balance the narrative? Or, by only telling the counternarrative, am I telling my own single story? Moreover, do I hide the problems that exist because I fear reinforcing a destructive single story? Or, do I show the problems that exist because confronting such tough realities could inspire change?

Is it even possible to tell the whole story or to paint a full picture?

In my trips to Ghana, Kenya, South Africa and now Uganda, I’ve struggled over these questions of what not to share. And it’s painful for me because I’m proud and unashamed of where I come from and where I’ve been.

Yet, it is only now that I’ve realized that I don’t struggle over these same questions when I’m in Europe. But why? It’s because many people, me included, often view much of Europe and much of Africa in contrast rather than one in the same. Truthfully, the same problems exist in both places, albeit to different extents in different places within and between Europe and Africa. But too often, I think we are quick to see "the bad and ugly" as exceptions to the rule in much of Europe and as the rule in much of Africa. This has to change.

For now, I kindly request that you join me in this journey towards better understanding the full picture; towards receiving all stories and pictures as mere pieces of a complex puzzle; towards recognizing how the single stories that exist in the back of our minds sometimes blind us from seeing the hardship and beauty that exist everywhere. Pictures are truly worth 1,000 words, but it sometimes takes a little work to capture all the meaning.