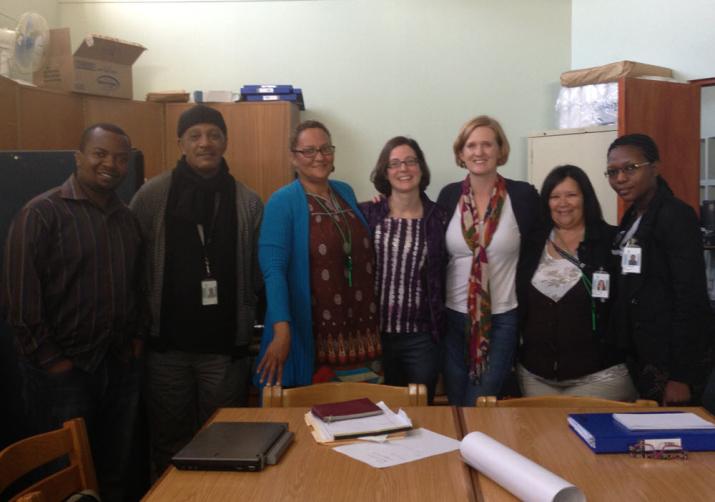 There are many measures of a successful global health research project: it engages both community leaders and those affected by the problem; it exceeds expectations for enrollment; it provides opportunities for students; it yields multiple peer-reviewed publications; it leads to policy recommendations; it spawns new research paths and funding opportunities; and, most importantly, it leads to real improvements in the health of the community.

Christina Meade, associate professor of psychiatry and behavioral sciences and global health led a project funded by the National Institute on Drug Abuse (NIDA) on methamphetamine use in South Africa that has achieved many of these elements of success over the course of just a few years.

Tik, as it is known in the poor townships of Cape Town, South Africa, is an impure form of methamphetamine that is smoked. Since the early 2000s, tik use has increased in the region, spreading rapidly in multiple neighborhoods and bringing with it related problems like increased gang violence, crime and school dropout. The greatest challenge for the community in trying to intervene with this growing population of tik users is reaching them in the first place—they are stigmatized and disenfranchised because of their addiction.

“While RDS has been successful in reaching other types of drug users in other parts of the world, we didn’t know if this approach would work with this population,” said Meade. After conducting formative research, including focus groups with tik users, they developed a highly effective recruitment protocol. “We were surprised when we enrolled nearly three times as many people as we had predicted,” she said.

The evaluation of RDS as a sampling method for tik users formed the basis of Master of Science in Global Health (MSc-GH) alumnus Stephen Kimani’s thesis, which was subsequently published in Drug and Alcohol Dependence, a top journal in the addiction field.

From their sample, Meade and her colleagues sought to characterize the patterns of drug use and the social factors that contribute to the initiation of tik use and progression to addiction. Study participants completed computerized surveys, clinical interviews and in-depth qualitative interviews with the research team. In a qualitative paper in press at the International Journal of Drug Policy, Andrea Hobkirk, a DGHI-funded postdoctoral fellow on the team, explored the factors associated with initiation of tik use among a subset of the study’s participants.

The prevalence of tik users and distributors in the community made tik easily accessible to first-time users, many of whom felt social pressure from friends and family members who perceived tik use as trendy and fashionable. These factors, in addition to limited opportunities for employment and recreational activities, made tik use an attractive option, especially for those turning to substances to cope with social and economic hardships.

The team used a mixed-method approach (combining quantitative and qualitative assessments) to describe the severity of tik addiction in this population. Nearly the entire sample reported symptoms consistent with clinical criteria for dependence on tik and experienced severe consequences of their use, with tik draining their financial resources, taxing their relationships and creating legal problems for them. “Many tik users also use other drugs, such as marijuana and heroin,” Meade said, “to manage the unpleasant side effects of prolonged intoxication on methamphetamine.”

Meade and her research team found that very few tik users have sought treatment for their addiction, often because they weren’t aware of available services (and if they were, they had incorrect perceptions of them). Ambivalence about seeking treatment, perhaps unsurprisingly, was another factor, with many participants citing multiple reasons for and against seeking treatment. Strikingly, none of the participants knew anyone who had successfully overcome drug addiction, so they did not believe that treatment could be effective.

“Our research showed that we need to build awareness of addiction treatment and more actively reach out to drug users to link them to treatment services,” said Meade. This work was recently published in Drug and Alcohol Dependence.

Addiction as a Driver of High-Risk Behaviors

In a paper published in AIDS and Behavior, Meade and colleagues described how many tik users engaged in sexual risk behaviors, such as unprotected intercourse with multiple partners, which are associated with HIV transmission. Yet, a substantial proportion had not been tested for HIV. Among those who had been diagnosed with HIV infection, about half were not engaged in HIV care.

In a qualitative paper led by Watt, published in Archives of Sexual Behavior, they described the central role of sex trading for procuring methamphetamine. Sex trading in this population was not formal, but rather done in the context of a once-off trade for a “hit.” Participants found it difficult to negotiate condom use in the context of sex trading, increasing the risk of HIV exposure. MSc-GH alumnus Ryan Lion used quantitative data from Meade’s project to further examine the topic of sex trading for money or drugs. His thesis identified a very high prevalence of sex trading among tik users, which was perpetuated by addiction severity, and many experienced physical and sexual violence when engaging in sex trading.

Hobkirk found a relationship between interpersonal violence and tik dependence severity. “Upwards of 90 percent of study participants had experienced or witnessed violence,” said Hobkirk. She explained that methamphetamine often makes people aggressive, resulting in violence in any number of forms, from mugging and carjacking to intimate partner violence, including sexual assault. “Violence and addiction have a cyclical interaction with each other—beginning for some as children when they witnessed or experienced abuse—making it difficult to determine whether violence caused the addiction or vice versa,” she said. Hobkirk’s paper on this work was published in Addictive Behaviors in March 2015.

Katie Guidera, who graduated in 2014 with a bachelor’s degree in global mental health through a self-designed Program II major, was part of the research team and also looked at the connection between tik use and violence. She found that the use of tik is significantly associated with perpetration and victimization of violence within a relationship. “Tik, like other stimulant drugs, is associated with a wide array of negative effects, including aggression,” she said. “Tik users have also been shown to be more likely to engage in high-risk sexual behaviors such as sex trading and unprotected sex.”

Opportunities for Master of Science in Global Health Students

This research program has created excellent opportunities for several MSc-GH students at DGHI. Stephen Kimani ’14 joined Meade’s research team as a student in 2012, shortly after the project was funded, and had the opportunity to assist with project management and data collection in South Africa.

Kimani’s training as a physician in Kenya gave him an invaluable perspective on the social dynamics that influence wellness and health in South Africa. “As physicians, we get snippets of our patient’s life when they come in to see us, usually for treatment of an illness. In such settings, we mostly explore failures with wellness such as medication non-compliance, addiction relapses and dietary indiscretions,” said Kimani. “My master’s fieldwork allowed me to observe factors of resiliency employed by tik users to survive an AIDS epidemic, non-existent mental health system and fragile criminal justice system.”

After receiving his master’s degree in 2014 and earning the Outstanding Student Award, Kimani entered a medical residency at Duke. “I have translated my fieldwork lessons to my clinical training as a resident by always acknowledging and promoting the resiliency in my patients. This also allows me to connect with them better and build a meaningful partnership.”

During that time, he witnessed the impact tik has on the lives of South Africans. “I encountered children as young as 10 years old using meth and drug-using women who had experienced frequent sexual assault, and I saw how violence and gang culture exacerbates the problem,” said Lion.

Lion returned from this experience with a deeper understanding of the vulnerability of drug users and the stigmatization they experience, which helped him to fully appreciate their humanity and their need for support. He is currently a first-year medical student at Georgetown University and hopes to work as a physician in underserved communities domestically and abroad. “Dr. Meade was a great mentor and instilled in me a passion for using research as a tool to help others,” he said.

The study’s results have identified important future directions for Meade and her team. They’ve provided the foundation for a new R01 grant application to NIDA that aims to reach this emerging population of methamphetamine users for HIV testing and increase linkage to HIV care among HIV-positive methamphetamine users. NIDA supports a “Seek-Test-Treat-Retain” model that actively engages high-risk groups for HIV testing and links HIV-positive individuals to treatment.

Several papers have been published and more are being written, forming a growing body of knowledge on the intersection of methamphetamine and HIV risk in South Africa. Meade says there is still work left to do on this issue, and she welcomes dedicated students who want to become involved in this program of research. In the future, Meade hopes to translate her team’s findings into intervention approaches for HIV prevention and treatment.