Putting Decolonization on the Agenda 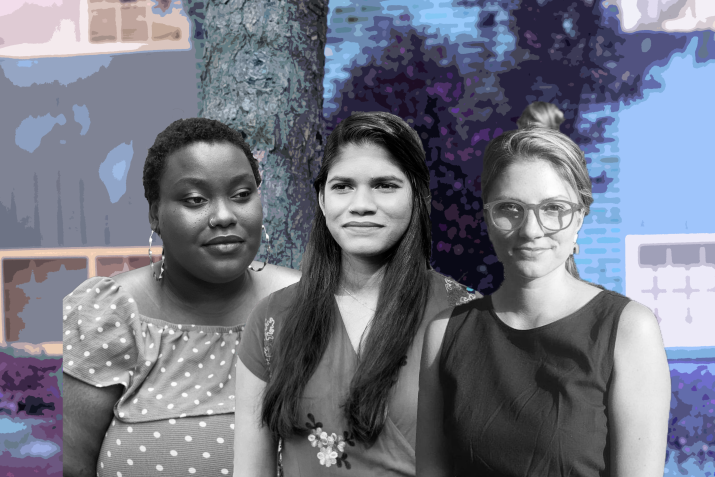 In fall 2018, three students who had just started the Master of Science in Global Health program found themselves talking in a lounge in Duke’s Trent Hall. Each had lived and worked in a different part of the world before coming to Duke, and as they shared their experiences, they voiced a common critique: Too often, global health agendas were dictated by wealthy countries, and not the communities they purport to help.

For Andrea Koris, Laura Mkumba and Yadurshini Raveendran, that first meeting grew into a mission. As Raveendran puts it, they wanted “to create a safe space for us and our peers to continue the conversation.”

After connecting with similarly focused students at Harvard, the University of Michigan and the University of California at Berkeley, the three formed a working group to examine the complicated colonial legacy of global health and how it continues to be influenced by its historical power structures.

The students began planning a half-day conference, which featured speakers from the World Health Organization, BMJ Global Health, and several universities and NGOs. A maximum-capacity crowd of 250 attended in person, with another 500 tuned in online.

Gavin Yamey, a professor of the practice of policy and global health, describes the event as “one of the most important conferences I’ve ever attended – one that shone a spotlight on how global health can perpetuate oppression unless it reflects critically on its own colonial foundations.

At the same time, the working group developed recommendations for acknowledging global health’s colonial roots in the classroom, as well as increased training in cultural competency for faculty, staff and students. And while Koris, Mkumba and Raveendran all graduated in May, they have inspired others to continue to push for progress.

When international protests against police violence and racism erupted in June, more than 100 current Duke students and alumni – led by Melissa Manus, Sreeja Kalapurakkel, Hiwot Zewdie, Paige O'Leary and Tra Tran – signed a letter urging DGHI to accelerate it's anti-racism efforts. The institute has appointed a task force to implement recommendations made by the working group.

The students’ work has also inspired conferences at the University of Edinburgh and the Karolinska Institute in Sweden. DGHI recognized Koris, Mkumba and Raveendran with an award for global health leadership in May.

“Andrea, Laura and Yadu have pushed us to reflect on what more we can do to dismantle structural barriers in our work,” says Mary Story, DGHI’s associate director for academic programs. “Their leadership in putting these issues on the agenda – not just for us, but for global health more generally – will have a long-lasting legacy.”