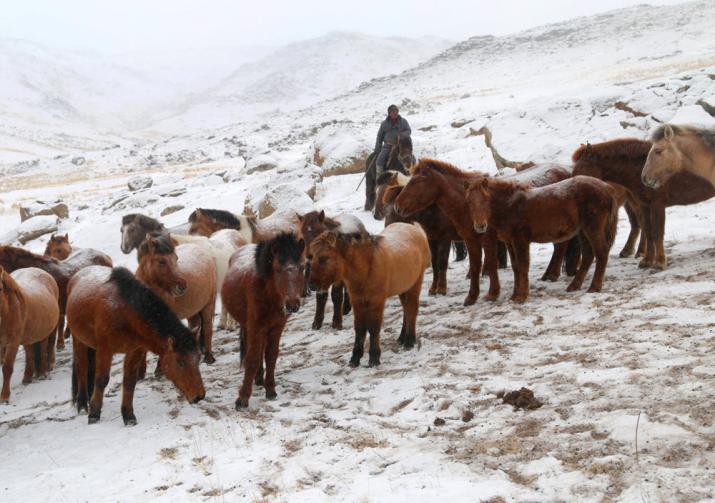 Mongolians rely heavily on their animals for nourishment, transport and farming. That's why DGHI professor Greg Gray's team is concerned about viruses spreading from animals to humans. Photo by Jim Rogalski, Duke Health.

Mongolia, a country of rugged, windswept expanses, is home to three million people and 50 million horses, camels, sheep and cattle. It is there that Greg Gray, professor of global health, infectious diseases and environmental sciences, has set up a remote research outpost that could detect the next global infectious disease pandemic.

Gray and his Mongolian colleagues are collaborating in a NIH-funded project that brings rapid influenza diagnostic equipment to rural areas where previously health professionals had to send samples to the national capitol and wait up to two weeks for results.

“In that time period, anyone with influenza would have either recovered or perished,” said Gray.

Gray and colleagues in Mongolia worry about the potential for viruses to mutate and jump from animals to people, since, according to Gray, 70 percent of emerging diseases that affect humans come from animals. They are also concerned about viruses spreading among animal herds because Mongolians rely heavily on their animals for many things, including nourishment, transport and farming.

“Flu viruses periodically kills ten of thousands of horses each year in Mongolia,” said Gray, who has spent the better part of the last decade working there. “There is evidence that a H3N8 virus like the viruses circulating today in Mongolia’s horses caused a worldwide human flu pandemic in 1889.”

Gray and his team received one of a set of grants awarded by the NIH’s Fogarty International Center to bring public health innovation to developing countries. The grant supports training of United States and Mongolian researchers on infectious disease surveillance, diagnosis and treatment. Gray has involved a U.S. company that makes portable diagnostic equipment in the project. The company, San Diego, California-based Quidel, has donated four machines and 1,000 test kits to the project.

U.S. and Mongolian research teams began their work together at Duke’s annual three-week One Health Training Program last May. The U.S. and Mongolian researchers designed this research and learned how to collect nasal swab samples from animals thought to be infected with influenza. They then moved to Mongolia and set up the study in three remote areas, informing local public health hospital and veterinary professionals about the study. Several months into the project the rapid diagnostic tests are proving to be useful in diagnosing influenza among hospitalized patients.

“This project will certainly help preserve the health of Mongolian people and their animals, and could potentially save lives,” said Gray. “In addition, we are bringing a new level of rigor to medical research in Mongolia, which is important to building capacity in the country’s health sector.”

If the project is successful, it is possible that the Mongolian government would invest in the low-cost diagnostic machines in each of Mongolia’s 21 “aimags,” or provinces. What’s more, said Gray, establishing an effective influenza surveillance system in Mongolia could influence the placement of stockpiles of influenza outbreak interventions such as human and animal vaccines and treatments.

Gray is hopeful that Mongolia becomes the model for other developing countries where transport of specimens is a problem.