Despite its notoriety for being a painful subject, Turner’s biostatistics class has developed a reputation as one of DGHI’s favorites 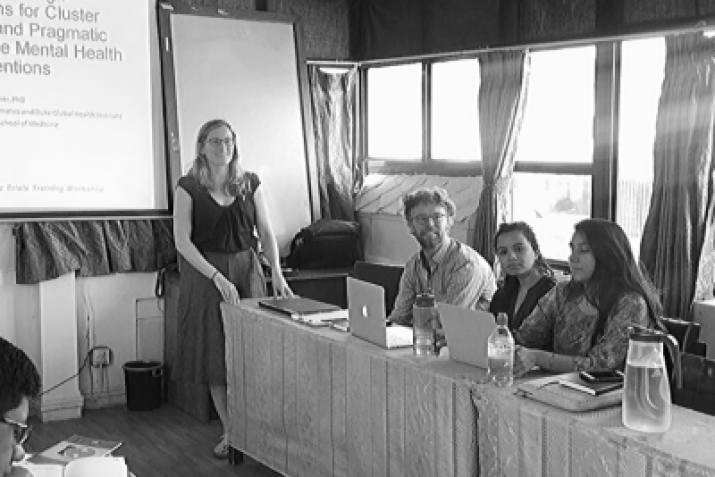 When she looks across the sea of faces in her biostatistics course for global health students each autumn, DGHI’s Liz Turner says she feels a tad daunted.

Because Turner’s course is a first-semester requirement for anyone in the MS in global health degree program, her students come from a wide array of professional and educational backgrounds. While some are fresh out of undergraduate programs that required statistics coursework, others have been working in jobs in the humanities for years, and any stats course they took may be a distant, and not necessarily pleasant, memory.

“Some of my students may have just moved to Durham from halfway across the world,” says Turner, an associate professor of biostatistics and bioinformatics and global health who has been at DGHI for eight years. She is also the dierctor of DGHI's Research Design and Analysis Core.

But despite its notoriety for being a painful subject, Turner’s biostatistics class—and Turner herself—have developed a reputation as DGHI favorites.

“I think there’s a lot of angst around the course, and there would be in general and understandably because it’s so difficult. The concepts are not straightforward. Out of all of their core classes, I think students spend most of their time on my class,” she says.

What’s her secret sauce? To help students connect, build community and learn at the start of the semester, Turner forms fixed teams that she describes as “diverse” in terms of experience and “created using non-random allocation.”

“I try to get someone who has experience in biostats and epidemiology on each team. And I tell them it can be hard to work on a team but we don’t always get to choose members of our teams. We try to best mirror what it’s like in real life. It can lead to some frustration, but I see students later, in second semester, who say, ‘Oh, now I understand why you did what you did. I love my team, they really help me,’” says Turner, who earned a PhD in statistics from McGill University followed by four years working as a collaborative biostatistician in the Department of Medical Statistics, on the Faculty of Epidemiology and Population Health at the London School of Hygiene and Tropical Medicine (LSHTM). She has extensive experience working in both epidemiological studies and randomized trials across a range of substantive areas in developed world and resource poor settings.

While she understands the dread some students feel about the class, Turner says most find it’s an opportunity to build community among DGHI’s students, who include first-year masters students and a handful of DGHI doctoral scholars and sometimes some postdocs linked to DGHI.

“We try to keep it focused on people who have a strong link to DGHI and global health,” she says.

Biostatistics is a broad concept. The quickie definition is using data, typically from large samples, to try to infer something about populations.

“In global health, most of my students will go on to apply data they collect about populations to medical and public health research,” Turner says.

So, for example, the populations they study can be as big as the US or Kenya, or be just a segment of a bigger population, such as people suffering from HIV in a country or community.

The “bio” part of statistics is “a very North American term,” Turner says. “It’s what in the UK and Europe they call ‘medical statistics.’ But I like ‘biostatistics’ because it feels a bit broader."

Her goal with DGHI students is to help them understand the world through data, and specifically data from samples, not an entire population.

Homework: To give or not to give more

Turner admits to an ongoing debate with herself when it comes to deciding how much homework to give students. “To really digest and comprehend the material they have to be thinking about it all the time,” she says.

The class has an epidemiology component, too. Typically, only about a third of her students have been exposed to epidemiology before. Many master’s in public health programs offer students two separate classes for biostats and epidemiology, but she likes the combined approach.

“We decided to combine them because they really balance and complement each other. Interweaving them into one course, we could better draw on the links between them,” she explains.

While qualitative data can give insights to researchers, biostats focuses on quantitative data—numbers, amounts. Turner has her students pull apart and analyze the numbers in both locally conducted research and large international clinical trials. The local aspect makes it seem more tangible and manageable, she says. And deconstructing the larger studies helps students see that they will be capable of publishing in large, reputable journals.

“We look at these studies in many different ways over the semester,” Turner says. “By reading the real literature and taking out the quantitative methods, we can use our common sense and these fundamental tools to really assess rich knowledge and evidence. They learn that we make lots of decisions using biostats, around programs and strategies we use to tackle the biggest challenges in global health. In the end we use quantitative data to inform our practice. I think it’s kind of cool.”