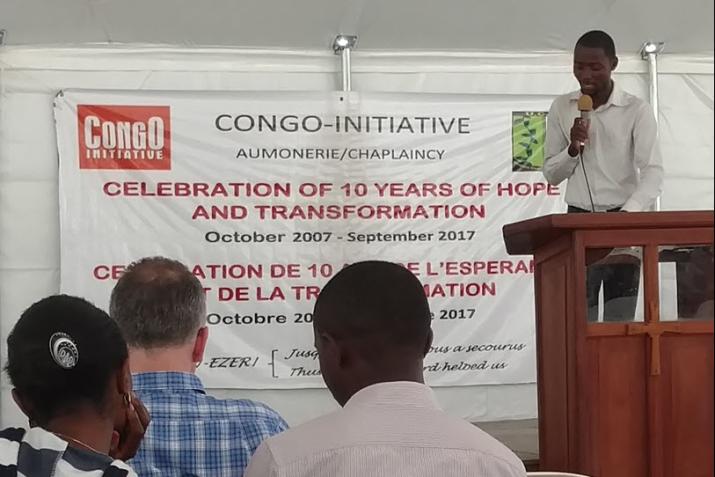 David Eagle's project coordinator, Jean Marc Asobee—a pastor, university chaplain and researcher—speaking in the chapel at the Christian Bilingual University of the Congo.

In many parts of the world, clergy have an essential role in maintaining community health. But DGHI’s David Eagle worries they may be neglecting their own well-being in the process.

David Eagle is an assistant research professor of global health at Duke, a sociologist who studies the social and structural determinants of mental and physical health. Before coming to Duke, he was a Mennonite pastor.

The intersection of Eagle’s pursuits have led him to the northeastern region of the Democratic Republic of the Congo (DRC), where he is studying the health burdens of clergy. His diverse background gives him unique insight into the critical role that clergy play in community health, and the toll on mind and body their work can take. He believes that if clergy are better equipped to address their own mental and physical health, they can more effectively care for others.

Eagle’s hope is that his work there with colleagues from both the U.S. and the DRC can be one step in the healing journey of this beleaguered people.

Eagle was raised in Edmonton, Alberta. His father was an historian who studied the welfare state in Canada; his mother, a social worker. They instilled in him, he says, “a really strong sensitivity toward issues of inequality and the need for societal interventions to address it.” Religion was notably absent from his upbringing.

While at the University of Alberta, where he earned a degree in mechanical engineering, Eagle joined a campus Christian group and began worshipping at a Mennonite church.  He was drawn to the Mennonite church for its emphasis on promoting peace and justice.

After finishing seminary in California, he served as pastor of a church in British Columbia for six years. Then, in 2008, he came to Duke Divinity School to pursue a master of theology degree. The following year, having developed an interest in the evolving role of religion in North American culture, he began work on his Ph.D. in sociology.

During his studies, he began working with the Duke Clergy Health Initiative, where he became interested in studying chronic health problems in clergy. Researchers with the initiative have found that the obesity rate among United Methodist clergy in North Carolina is 41 percent, 12 points higher than among the general population.

“Methodist clergy are mostly white,” Eagle observes. “They almost all have higher education, they all have health insurance, they all have regular income—all these things that are generally associated with lower levels of obesity don’t seem to be having the same effect.”

Potential risk factors include the unique demands of the job, which often involves irregular hours, high stress and frequent attendance at community meals. There is also the tendency of clergy to put others’ needs above their own. To tackle these challenges, Clergy Health researchers have designed and evaluated a holistic health program, and currently, they are piloting several stress reduction programs for use with clergy. This fall, Eagle is launching a long-term study of several hundred Duke seminary students, monitoring their health over the next decade, to better understand how these problems develop.

Eagle’s interest in the DRC was nurtured by Congolese professors and classmates in seminary, and his concern for health disparities among clergy led him last summer to the city of Beni in the eastern province of North Kivu, where two wars and ongoing violence have taken millions of lives.

At first, he was overwhelmed by the devastation, the deep stains of horrific warfare. He met people who had survived the death of loved ones, sexual violence, kidnappings and the destruction of their homes. But he also saw a rich social structure that managed to endure within communities despite “having been traumatized in all kinds of ways for a very long time.”

“We are living in a very stressful environment,” attests Noé Kasali, a Congolese colleague who operates the Bethesda Counseling Center in Beni.

Health care for physical ailments in the country is minimal, and behavioral health care is almost nonexistent. Pastors fill the gaps, ministering to their neighbors’ needs and often working long  hours for little, sometimes no, pay.

Kasali’s interventions with clergy begin at the most basic level. His team meets with pastors to express concern for their health and suggest that it’s okay to seek help. Even this simple step has been “really eye-opening,” Kasali says. “This is very powerful.”

This process is not only essential for the well-being of the pastors themselves but for that of their communities. Eagle understands the foundational role they play as caregivers. In the eastern DRC, religion, he’s noted, “is woven into the social fabric and rhythms of  daily life.” Organized religion offers community-based networks that can be leveraged to provide much-needed care.

Eagle has been encouraged by the pastors’ receptiveness to the possibility that the sources of illness and suffering may be complex and deeply rooted. They’re willing to probe beyond the physical manifestations and to thereby more effectively care for their congregants.

“Africans don’t make as strong a dichotomy as we do in the West between the physical, the mental and the spiritual,” he says. “We asked pastors, ‘Where do you think mental illness comes from?’ They’re perfectly willing to say that some of it’s biological, some of it’s spiritual, some of it’s emotional, some of it’s probably related to trauma. It’s definitely a much more integrated view.”

The pastors “understand the effect that trauma has, the effect that systematic poverty and unemployment has on people,” but “they’ve felt at a loss as to how to most effectively help—and they really want to help. That’s why they’re pastors. They feel called.”

Eagle had planned to return to the DRC this summer to host a pastors’ conference and begin introducing training and group counseling. Because of the outbreak of Ebola in the region, those plans are on hold. But he remains committed to a long-term goal of helping introduce simple health-oriented programs that can be administered through churches.

“There have been several researchers who have developed really effective trauma interventions in Africa that are now being delivered by African staff,” Eagle says. He hopes to find funding to bring these programs to the DRC, to likewise be administered by Africans.

It’s one small but significant step toward healing, a source of encouragement for Noé Kasali.

“Pastors recognize mental health as something we need to deal with, instead of viewing it as a result of sin or a lack of faith,” he says, “and we must continue to work with pastors in that regard.