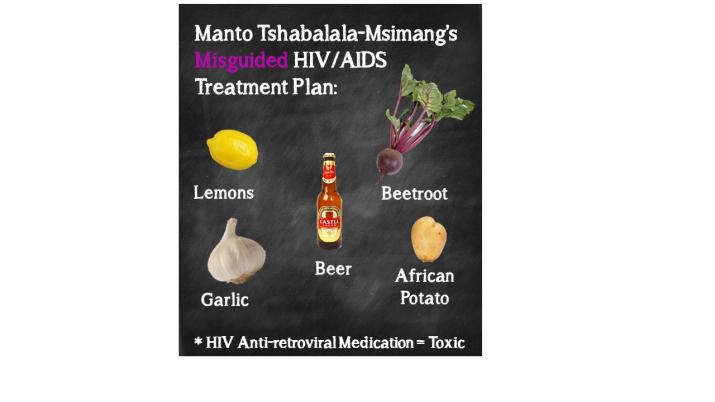 Outline of the Diet Health Minister Manto was a Champion of to Treat HIV/AIDS. She refused antiviral medicine, a proven class of drugs to treat HIV/AIDS, to millions of people.

Dr. Manto Tshabalala-Msimang was accused by many for being responsible for the untimely death of over 300,000 South Africans during her time serving as South Africa’s Health Minister. Many South Africans refer to her as “Dr. Beetroot” which was coined in a negative response to her stance on HIV/AIDS treatment. She believed that the South African AIDS epidemic could be treated with alcoholic beverages, fruits, and vegetables such as garlic, lemon, African potatoes and beetroot1,2.

Although South Africa has the largest number of HIV-infected people in the world, it was this misguided belief that led her to refuse providing Zidovudine to HIV-positive mothers. Zidovudine is an antiviral drug that has been shown to dramatically reduce the transmission of HIV from a mother to her unborn child. This led to many children contracting the disease which could have been avoided with medication.

Unfortunately again following her misguided diet theory, she also refused to give out antiviral medication to the general HIV-positive South African population. This was in spite of the fact that antiretroviral therapy is well established to improve quality of life and potentially be lifesaving4.

“Today I want to dispel this myth, because it is absolutely not true [that antiviral medication works]. The pharmaceutical industry and those who have a vested interest in the drug industry fuels this propaganda.” – Health Minister Tshabalala-Msimang3 (11.7.2000)

“We (the South African ANC government) have no plans to introduce the wholesale administration of these drugs in the public sector. ARVs (Antiretroviral medications) are not a cure for Aids.” – Health Minister Tshabalala-Msimang3 (11.8.2000)