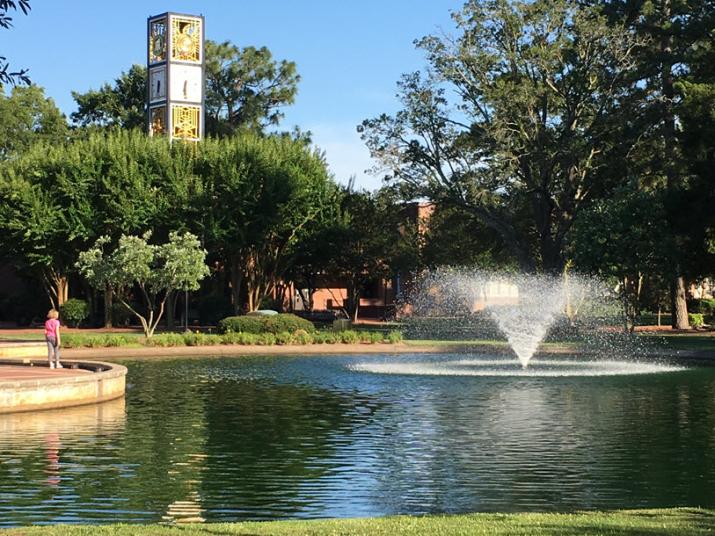 A glimpse of the University of North Carolina at Pembroke campus, where the team conducts much of its research.

Robeson County, a community with a majority American Indian Lumbee population in southeastern North Carolina, comes in last place for health outcomes among the state’s 100 counties. The county ranks at the bottom in length of life, quality of life, health behaviors, social and economic factors and clinical care measures. And rates of smoking, adult obesity and physical inactivity are alarmingly high in comparison to other counties in North Carolina and nationally.

So when Duke nephrology fellow and 2014 Master of Science in Global Health graduate John Stanifer returned from his fieldwork research on kidney disease in Tanzania looking for a local underserved community to continue his work, Robeson County was a natural fit. As part of a larger study funded by the American Kidney Fund, he’s currently leading an undergraduate student research team in exploring the challenges and needs of people with chronic kidney disease in the county. The long-term goal of the project is to develop population-level interventions to address those needs.

“It’s the poorest county in the state with not only the highest rates of end-stage renal disease and dialysis, but the worst outcomes,” said Stanifer, who also completed a global health residency through the Hubert-Yeargan Center for Global Health. “And no one is doing long-term, outcomes-oriented research in this area—so there’s a clear gap to fill.” With Stanifer’s dual training in medicine and global health, he’s particularly well-suited to undertake this kind of project.

Stanifer was also drawn to the project by the parallels he sees between his work in Tanzania and the needs of the Robeson County community. “We’re exploring some of the same questions and applying some of the same techniques I learned in Tanzania,” he said. “The concept of ‘local is global’ certainly applies to this project. Perhaps in the future we can take what we learn here and apply that to communities in Africa or other low- and middle-income countries.”

Study Looks at Gaps and Resources across Ethnic Groups

This summer, the student team, part of DGHI’s Student Research Training (SRT) program, is working to understand the needs, gaps, barriers and resources in the county with regard to chronic kidney disease and how these factors differ across ethnic and racial groups. Robeson County’s population is diverse: 40 percent Lumbee, 30 percent African American, 20 percent Caucasian and 10 percent Hispanic. Given these demographics, Stanifer says, any future population-level interventions will have to be nuanced enough to address the needs of all the different cultures represented in the country, so this formative work is critical.

To develop this understanding, the team is conducting quantitative and qualitative interviews with adults of all ages, with and without chronic kidney disease. So far they’ve enrolled more than 150 participants. They’re asking them questions related to positive mental health, coping, stress, neighborhood cohesion, self-efficacy, communication and health literacy. The team is also conducting focus groups and testing participants for kidney disease.

The students, Stanifer says, are playing an integral role in the project, and “they’re doing a phenomenal job.” They’re enrolling and following up with participants, conducting and transcribing interviews, setting up and taking notes at the focus groups and managing the study data. He expects all four of the students to extend their work on the project into the upcoming academic year with an independent study and potentially honors’ theses and publications. Daphne Wang, a Master of Science in Global Health candidate, is conducting her master’s thesis research and helping to lead the project.

Jeremy Gottlieb, a rising junior global health major and research team member, reflected, “I get excited when a patient tells me, ‘I’m so glad you’re here,’ because it reminds me that the quantitative and qualitative skills we’re developing are helping a part of North Carolina most Duke students never interact with.”

One of the best aspects of the study, Stanifer says, is the collaborative nature of the project. Cherry Beasley, professor of nursing at the University of North Carolina (UNC) at Pembroke in Robeson County, is a co-investigator. “Cherry has been an incredible partner,” Stanifer said. “She’s been instrumental in building relationships locally and supervising the students when I’m not on-site.” She’s also an advisor on Wang’s master’s thesis. Beasley and Stanifer have also engaged UNC Pembroke nursing students in the project. And Ronny Bell, director of the Maya Angelou Center for Health Equity at the Wake Forest School of Medicine, co-wrote the study grant with Stanifer.

They’ve also partnered with the Southeastern Regional Medical Center (SRMC), the major healthcare provider for the region. Another Duke nephrology fellow, Blake Cameron, had developed an algorithm to search Duke’s electronic patient health record system for patients with and at risk for kidney disease. The team partnered to implement this algorithm with SRMC to identify potential study participants across the county as well as opportunities for optimizing chronic kidney disease care within SRMC.

This fall, Stanifer will co-lead a related Bass Connections project with Beasley that will explore the role of religion and spirituality in chronic disease and self-management. Spirituality has been shown to play an important role in improvement of chronic disease outcomes among minority populations.

As part of the broader study, the research team also plans to seek input from other key stakeholders in the community, including doctors, nurses, social workers and other providers.

“This is the beginning of what I consider to be a long-term commitment to working with the people of Robeson County,” said Stanifer. “Ultimately, our hope is to effectively address the huge disparity in outcomes for patients in this region with kidney disease and end-stage renal disease.”