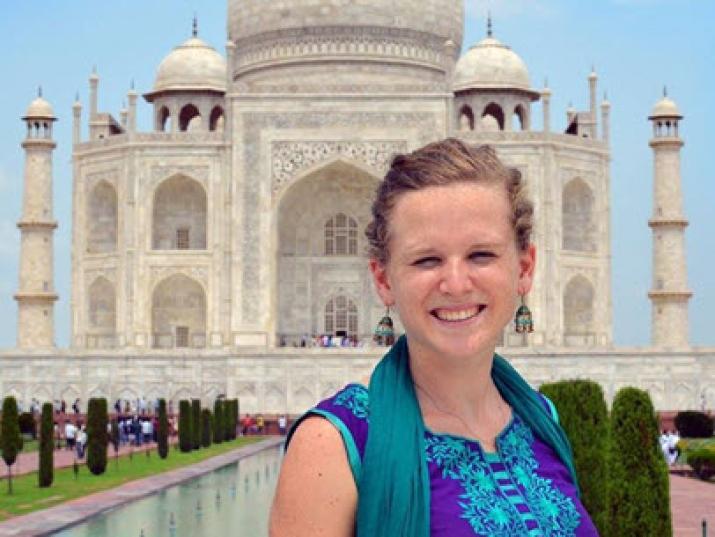 Assistant global health professor Eve Puffer’s global mental health class solidified Julia Dunn’s interest in merging her psychology major with global health. “Mental illness is the leading cause of disease burden in the world, and I was really interested in taking psychology theories into a cross-cultural context,” she said. Dunn graduated in May with minors in global health and cultural anthropology.

Dunn’s study abroad experience—which spanned Washington D.C., India, South Africa and Brazil—gave her a perfect opportunity to apply this goal to a real-world question: “How can support networks alleviate or minimize the effects of mental illness?” She and her peers conducted qualitative interviews with traditional healers, psychiatrists and clinicians, ultimately seeking to critically analyze and compare the health systems in each of the countries.

Despite the many differences between the countries, such as the ways stigma manifested, they found one common thread across cultures: family plays a significant role in supporting loved ones, and family support ultimately minimizes the stigma associated with mental illness.

Through this experience and her coursework, Dunn, who is from the Netherlands, learned that the words used to describe mental illness and associated issues vary widely across cultures. For her next fieldwork experience, she wanted to conduct qualitative research one of her own languages—Dutch. She pursued an opportunity through the Amsterdam Health and Technology Institute (AHTI), a Duke Global Health Institute (DGHI) partner, that built upon her study abroad experience.

AHTI was partnering with a research group, the Digital Life Lab, which was conducting research on how to use technology to decrease the stress of informal caregiving in urban areas in the Netherlands. “It was an interesting collaboration,” Dunn reflected, “because the PhD student I was working with didn’t know a lot about my field, and I didn’t know much about her field, which was human-computer interaction. We learned from each other.”

They conducted qualitative interviews with people who were taking care of an ailing family member or friend; at the suggestion of Dunn’s faculty advisor, associate global health professor Kearsley Stewart, they also incorporated PhotoVoice methodology into the project. They asked participants to take photos periodically to document both their work as caregivers as well as other aspects of their lives and describe their feelings at the time each photo was taken.

“The caregivers weren’t aware of the high burden they experience in their daily life,” Dunn said. “We found that it was really helpful for them to have a tool like PhotoVoice to document their life. It was a powerful way for them to reflect on their experience.”

Although Dunn’s fieldwork was not focused on a population in a low-income setting, she stressed that informal caregiving arrangements are increasingly common in the Netherlands, and they can have a substantial financial impact on people’s lives. Many people must cut back their work hours or leave their jobs to care for their loved ones.

Looking back on her time at Duke, Dunn says she really enjoyed the connections she made with global health faculty members. “A lot of the professors advocate for students and are very involved in promoting and advising student research.”

In addition to her global health studies, Dunn helped lead the wildly popular “Breaking Out” project at Duke, a photo exhibition and social media campaign whose mission is to encourage healing through art and counter the culture of silence that isolates, blames and shames survivors of sexual violence.

The 2016 Breaking Out Facebook album reached more than 40 million people worldwide, and its organizers are currently exploring ways to expand the campaign and help sexual assault survivors across the nation and in other countries share their stories in safe and powerful ways. Dunn has graduated, but Breaking Out organizers who are still at Duke will host an exhibit in the Duke Chapel in September—when most sexual assaults happen on campus—to help raise awareness about sexual assault.

Dunn was also an editor for Develle Dish, a student-run blog where students can contribute posts related to the experiences of women on campus.

Next Step for Dunn

After graduating, Dunn secured a year-long internship at the Alliance Health Project, an LGBTQ clinic in San Francisco with a strong focus on mental health resources, research and testing for patients with HIV/AIDS. After that, she hopes to pursue a master’s degree in global mental health at King’s College in London.