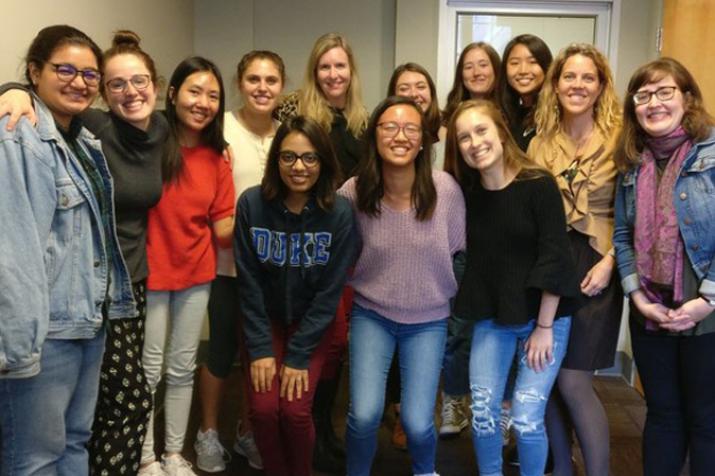 Behind any source of global health data there is a story waiting to be told. For researchers and program officers working on global reproductive health, one of those hidden stories has to do with women’s use of contraceptives: Why do one third of women who start a modern method of contraception abandon it within a year, even if they still want to avoid pregnancy?

Over the past year, a group of Duke students has been trying to make it easier to seek answers to that question in the world’s biggest trove of data on contraceptive use. As part of a project called Big Data for Reproductive Health, the team developed a suite of tools and an app that help researchers visualize data from USAID’s Demographic Health Survey, which amasses data on health behaviors from more than 80 countries. Their hope is to provide a better tool to mine the survey data—and reveal patterns that lead to better family planning interventions.

“When you actually visualize data, it’s much meatier than just looking at numbers and tables,” says Saumya Sao, a global health and gender studies major who began working on the project during the summer of 2018. “It can show you what’s really happening.”

The available contraceptive calendar data is robust. It includes women’s previous five years of contraceptive choices, as well as their reasons for discontinuing or switching methods. But it is recorded as a string of characters the user must unpack and decipher. “It’s really hard to actually pull information from that data,” says Sao. “It’s really useful data and data that’s proven to be representative of national and even smaller geographic areas, but it’s just not being utilized.”

Under the leadership of DGHI research scholar Amy Finnegan and Megan Huchko, director of DGHI’s Center for Global Reproductive Health, the team refined the tools, which give users unprecedented ability to isolate specific aspects in the data.

One feature called “See the Switch” allows users to see what contraceptive methods women used first, what they switched to and why. The interactive cord diagram makes it easier to see whether women lacked access to contraceptives or chose to stop using them for a variety of reasons, so interventions can target specific obstacles.

The tool allowed the Bass Connections team to identify a phenomenon of “December quitters” in Kenya, for instance, where unexpectedly large numbers of women discontinue contraceptive use at the end of the year.

Image
The Big Data for Reproductive Health team was the Judges' Selection Winner at the Bass Connections Showcase in April 2019.

The Big Data for Reproductive Health...

“It’s really hard to see stuff like this when you’re just looking at tables and numbers,” says Finnegan. “I think that, for me, has been the biggest asset of our project.”

The team presented their work at the International Conference on Family Planning in Kigali, Rwanda, where their poster won the judges’ choice ribbon. And researchers who collect the Demographic Health Survey data confirmed the app’s potential for real-world utility.

“They thought that these tools were very representative of something they’d want to use to actually train their (monitoring and evaluation) officers,” says Sao. “It was incredible to hear that.”

The project will continue in the coming year, with plans to get the app in the hands of those who work directly on reproductive health issues. While the first year focused on testing the tools with academics and advocates who already work with the data, Finnegan says they would be especially useful for monitoring and evaluation officers who struggle to capture the “churn” of uptake and discontinuation. She’d like to see how useful they would be for officials including county health managers too. “There is a real need to get this data out there,” says Finnegan. “We do want to get to the end of the evidence to policy pipeline.”

The team hopes to integrate a machine learning tool based on this summer’s Data+ work. Based on a woman’s age, education level, distance from a clinic and other factors, the tool could predict her likely contraceptive trajectory.

The Big Data for Reproductive Health team’s efforts are playing into an even larger conversation too, as its work informs an ongoing debate about whether to keep collecting contraceptive calendar data at all.

“I do hope that it translates into actionable information for people,” says Finnegan. “We see ourselves as that conduit.”