As he prepares to retire, DGHI professor David Boyd reflects on what his students taught him – and why he’s not done with them yet. 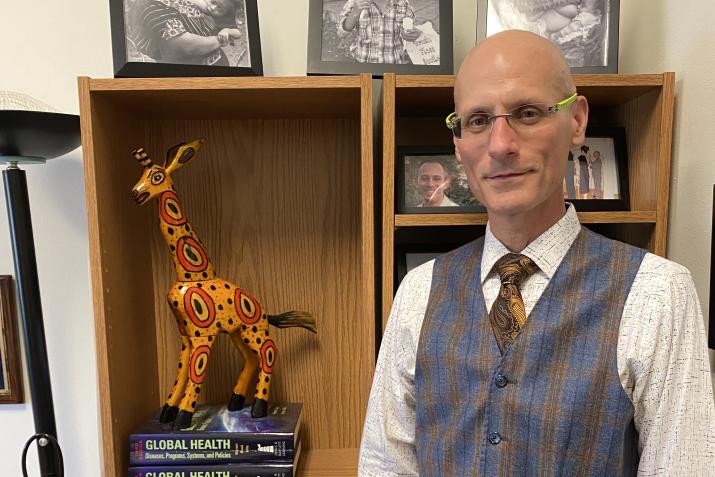 David Boyd's office is crammed with photos and artifacts from his travels as a global health teacher and scholar.

When David Boyd, Ph.D., joined the Duke Global Health Institute in 2009, he was unsure how long he’d live in Durham. He came with his husband, Laurence Helfer, who had been hired as a professor at the Duke School of Law, and it was common for them to move every few years.That pattern ended once they came to Duke.

“We loved Duke immediately, and then Durham just started getting better and better,” says Boyd, who is retiring June 30 after more than a decade as one of DGHI’s most popular professors. “Every time we had an opportunity to leave, even going back to New York where Larry grew up, we realized this is too great of a place. Durham is home. Duke is home.”

Boyd, who served as the Hymowitz Family Professor of the Practice of Global Health, came to DGHI at a time when the institute only offered a certificate program. His work in cross-cultural medicine, indigenous health issues and maternal/child health has taken him to dozens of countries over his career. One of his popular online courses, “The Challenges of Global Health,” has been taken by more than 48,300 students.

“I’ve been in airports and restaurants where people came up to me and said they took the course for credits in middle and high school and for their [military] training,” he says. “It’s had an impact and brought a lot of people to global health. I am incredibly proud we did that.”

As Boyd’s final day at Duke nears, he spoke with us about his years teaching, what he’ll miss most working in Trent Hall, and where he sees global health headed now. This interview has been condensed and edited for clarity.

Although you’re retiring, you’re not done with global health. You’ll now be an emeritus professor at Duke. How do you plan to stay involved?

Ideally, I’ll come back and give guest lectures or even teach courses. I’ll also still be available to advise and be a resource for students where I can be useful via email. Durham is my city, Duke is my home. I can’t imagine not still being engaged.

How have students changed you over the years?

Oh, my gosh, they made me smarter. They’ve pushed me. Over the years, they asked questions, brought me problems and when we work together, it caused me to reflect and rethink an issue, pushed me to learn about areas I hadn’t thought about before. That’s how the students have had an impact.

I still hear from students, updating me on their lives and work. I had an entire group of them call themselves “Boyd’s Babies.” My “babies” may be surgeons, psychiatrists or started their own NGOs (non-governmental organizations) now, but they’re still my babies.

Your office is known for its vibrancy and diversity with pictures, souvenirs and gifts from your many travels. If you could pick two that hold the most meaning, what are they?

In Guatemala, you see lots of wooden carvings. A group of undergraduate students brought a giraffe to me after we saw it at one of the markets on a research trip.

The second is the feminine napkins from the Myna Mahila Foundation. The student who is the organization’s CEO and Founder, Duke alumna Suhani Jalota, took my global health class when she was a first-year student. We talked about taboos with menstruation and the lack of sanitary napkins that kept girls out of school. She started this foundation that is going strong now. She’s one of the greatest examples of how students can become passionate in global health. She’s unbelievable and really one of those bright lights. I’ve had so many “bright light” students through the years.

How have you seen students, at all academic levels, change after taking your class?

(Boyd points to a wall with dozens of thumbtacked “thank you” cards). Look behind you. I have never seen students grow and be as excited with other students who are interested in global health. For example, they’ll take the global health course, and they’re committed by the second day. The passion, combined with intellectual interests and curiosity and thirst for social justice, is unlike anything I’ve ever seen. And to see it grow over the years...

We were a certificate program when I started here, and it shifted to a major. That shift has continued because of a ground swell from students. It’s a level of passion that I don’t think you get in any other majors. Every cohort has just gotten better and better with every year.

Thank you cards and notes from students are a constant reminder for Boyd of the rewards of his work. Photo by Sophia Li

Thank you cards and notes from students...

Which colleagues in Trent Hall will you miss most?

Oh, that’s playing favorites, but that’s okay. (DGHI Interim Director) Dennis Clements. He’s truly my friend, and we’ve had a lot of fun together through the years. One of my fondest memories was after work, having a glass of wine with Dennis in his office and “solving the world’s problems,” spending time improving the Global Health Capstone course. We were pushing each other through the years.

And Lysa Mackeen, (DGHI’s assistant director of experiential learning), count her in that category as well. She helped me develop so many projects, and the SRT program I ran in Guatemala. Those are two of many people, but they are both emblematic of what DGHI is. DGHI was and is all about the people.

Any memorable experiences from joining students in field work?

I’ve taken students through the highlands of Guatemala. Someone made a comment about the beautiful colored plastic jugs the women and girls were carrying. I stopped and told them they were carrying those jugs because they didn’t have water in their houses. They were spending hours of their day trying to get water, and the girls doing so were not in school.

What the student saw was the beauty of the jug and from my perspective, a sign of the determinants of health we need to improve: access to clean water, and get these girls in school. That group was slightly taken aback by what I said, and they saw deeply into the work we were doing. After that, they learned not to make assumptions when in another culture.

Teaching students to look underneath the surface and see things other ways is one thing about teaching I’ll miss.

Image
Boyd with a student, one of thousands he has taught and mentored during his career.

Boyd with a student, one of thousands he...

Where do you see, or hope, global health will be 10 years from now?

I would like to see three things happen. The first, for it to have improved its messaging and political import so there would be sufficient financing for us to act proactively instead of reacting to crises after they occur, to have infrastructure and preparedness.

Next, more developments in implementation science. I can’t tell you how many projects I’ve seen where the same thing has been done again and again and really without any good evidence-base to evaluate to show if it's working well and why.

Finally, changes in global health financing structures. We need to look more carefully at how financing is taking place and how the flows of financing work, both within countries and internationally. I think there are efficiencies that can be achieved.

What else are you going to miss in retirement?

I am truly going to miss not being here post-pandemic when everyone is back in the building. It is a close-knit group of faculty and staff working together for a common cause. I’m going to miss my colleagues, but they better keep the place up or I’ll come back. But I won’t miss having to teach a student how to use a squat toilet.