Tick Collection? There’s a Bot for That! 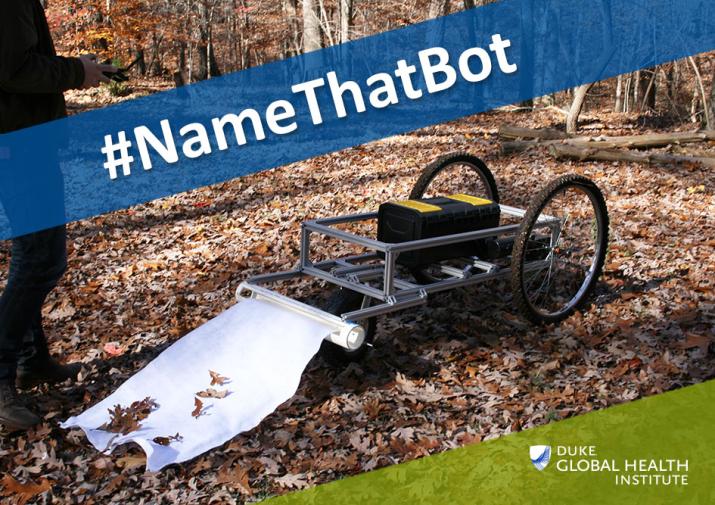 The tick-collecting robot needs a name! From now until Monday, February 15, we’re running a naming contest. See contest details at the end of the article.

Collecting ticks for infectious disease research—currently a manual process involving close contact with the ticks—is risky business, putting researchers in danger of contracting some of the very diseases they’re studying. But last year, Duke global health and medicine professor Greg Gray had an idea: could a robot do the job?

When Gray contacted the Duke Robotics Club to explore this idea, junior electrical engineering majors Andrew Buie and Logan Rooper jumped on the opportunity to make it a reality.

“I was excited about this project,” Buie said, “because, unlike many other undergraduate engineering projects we could have pursued, we’d be able to fully develop a useful product—one that would have clear and immediate research benefits—within a year.”

Rooper was drawn to the project for more personal reasons: “I had a friend in high school who had Lyme disease and I saw how badly it affected him,” he said. “If we can help researchers study ticks and parasites more safely, they’ll be able to come up with solutions faster.”

To date, the main method for gathering ticks has been to sweep a felt-like fabric over the ground. Ticks are attracted to humans’ heat and carbon dioxide, so they hop on the fabric. After completing the collection, the researcher rolls up the piece of cloth and transports the ticks to a lab. The problem is that the ticks—which carry viruses, bacteria and parasites—often jump on the researcher, too. 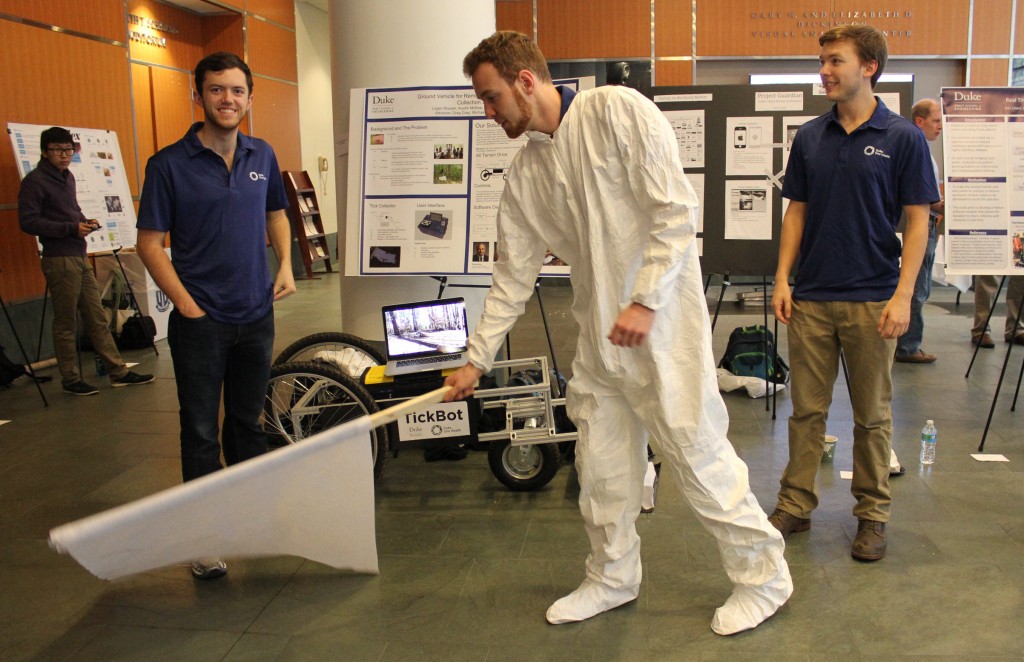 Last summer, Buie and Rooper, co-presidents of the robotics club, accompanied Gray to the local Duke Forest to study the tick collection process. Based on what they saw, the students came up with a proposal for a robot that would emulate what the researchers were doing but minimize exposure to ticks.

Buie and Rooper then recruited a classmate, Austin McKee, to their team. What started as an extracurricular project soon evolved into an independent study.

The robot—which has since been dubbed “the tickbot” by the team—is a small vehicle with two mountain bike wheels in the front and a swivel wheel in the back. A sheet of felt-like fabric hangs off the back, and the cart emits heat and carbon dioxide to attract the tick to the cloth. Once the ticks have been collected, the fabric can be rolled into its cylinder and safely transported to a lab.

The robot features high-power motors and a differential drive system that enable the cart to travel on uneven terrain, which is critical because ticks are typically collected in the woods. It’s also equipped with a remotely-viewable video camera, so the person at the controls can see exactly where the robot is headed. The robot can be controlled remotely from up to one kilometer away. 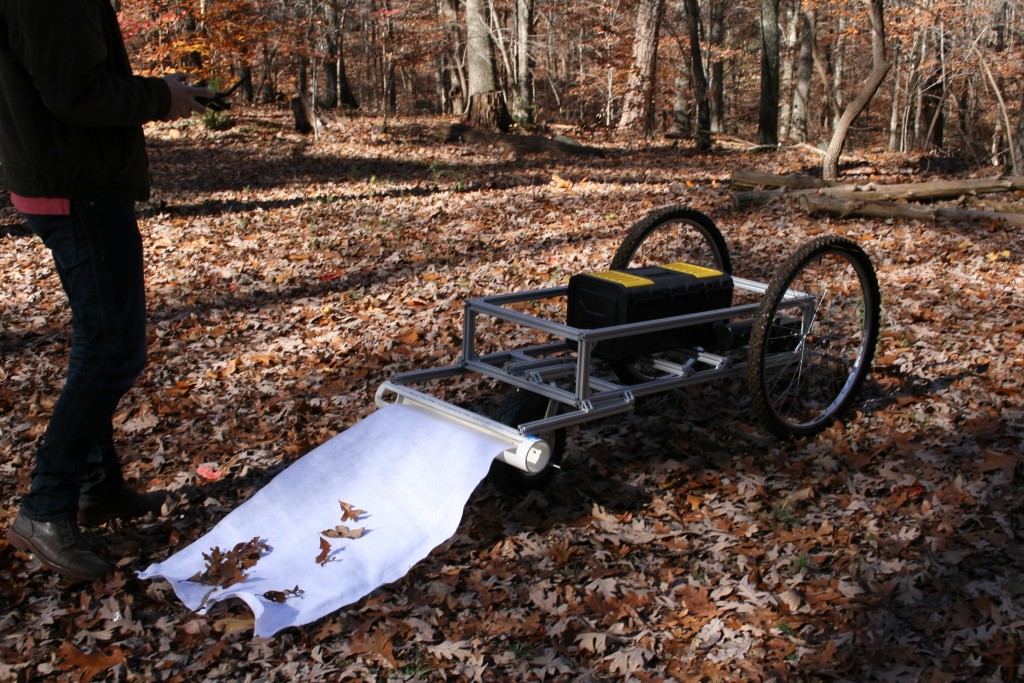 The current version of the robot in a fall field test, which was deemed successful by faculty advisor Greg Gray.

Project to Contribute to One Health Research at Duke

Gray, a member of the One Health team in the Duke Global Health Institute, says that this project embodies a primary One Health goal—to incorporate interdisciplinary fields of science in a collaborative effort. One Health is a research approach that encompasses animal, human and environmental health.

“Today we have these difficult problems in public health that cannot be approached by just one discipline, so we need to work across disciplines in teams,” Gray said.

Gray emphasized the significance of this project, noting that the safe study of ticks and their roles in infectious disease is critical to public health.

What’s Next for the Tickbot?

At an independent study presentation in December, the students demonstrated the robot prototype, which was field-tested for the first time in the fall. This spring, they’ll be meeting with entomologists to refine the design, adding the carbon dioxide emitter and video camera, and completing additional field tests. They hope to wrap up development of a working prototype by the end of the year, but they’re committed to staying the course till the project is complete. Eventually, they said, the robot may be used to collect other insects and arachnids for research.

We Need your Help: Name that Bot!

The tick-collecting robot needs a name! From now until Monday, February 15, we’re running a naming contest. To learn more and submit a name suggestion, visit our website. The winner will be selected by “Team Tickbot”—Gray and the students developing the robot—and will receive a DGHI and Duke One Health gift pack. The winner will be announced on our social media outlets on Friday, February 19.