“We Have a Solution for It”

Duke and Ugandan surgeons collaborate to save babies with a rare birth defect that shouldn’t be fatal, but often is. 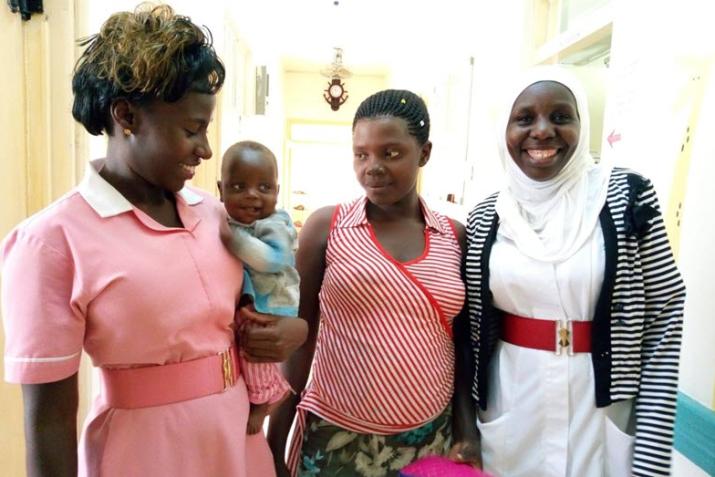 Baby Nathaniel at his three-month checkup with his mother (center) and two of his nurses. Survival odds were stacked against Nathaniel, who was born with gastroschisis.

When little baby Nathaniel was born at Mbarara Regional Hospital in western Uganda, everyone knew one thing for sure. He was going to die. The boy had a condition called gastroschisis, where a baby is born with its intestines, and sometimes other organs, outside of its body. The two attending nurses looked at the newborn and sighed, then shared the bad news with the infant’s mother: of all the babies born with gastroschisis at Mbarara so far, none had survived.

Anne Shikanda Wesonga saw something different when she looked at the tiny body on the exam table in front of her. As a surgical resident, Wesonga had spent the past year at Uganda’s largest hospital, Mulago, keeping track of babies born with gastroschisis for a study of their outcomes. Forty-one babies had been born with the condition. Only one had survived. But that one was enough to convince Wesonga that there was hope for Nathaniel.

Even in low-income settings like Mbarara, she believed something could be done. Maybe this baby would live.

“It was very hard, because everyone told me you are fighting a war you can’t win,” says Wesonga. “‘Those babies can’t survive,’ they said, ‘Just leave them to die.’ Even in the hospital I felt I was fighting a war I couldn’t win.”

Fortunately, she wasn’t alone in the fight. Tamara Fitzgerald, an assistant professor of surgery and global health at Duke, and others in a group set up to empower Ugandan surgeons were ready to get involved. Fitzgerald knew babies born with gastroschisis do not have to die. In the United States and other high-income countries, newborns with the condition receive a fairly simple surgical correction and almost universally recover.

“In our country, we have it completely worked out, and if your child does not survive from gastroschisis, it’s a rare occurrence,” says Fitzgerald. She finds it unconscionable that in places like Uganda, outcomes are the opposite. “There are kids dying, and we have a solution for it.”

Fitzgerald has felt compelled to focus on global surgery since medical school; the month she spent with a surgeon in Cameroon solidified her passion. Since 2013, she has partnered with surgeons in Uganda and North America to develop a pediatric surgery fellowship program in Uganda. Three pediatric surgeons have already completed the program and four more are in training, including Wesonga.

Training them is a matter of life and death. There are currently just four fully trained pediatric surgeons in a country with around 20 million children.

For Wesonga, who had finished her general surgery training and got support from Fitzgerald’s group to sub-specialize in pediatric surgery, gastroschisis’s tragically high mortality rate begged attention. When she asked Fitzgerald to collaborate on a research project to improve gastroschisis survival rates in Uganda, the Duke physician was enthusiastic. “We try to work with them on things they want to work on and empower them to solve problems they see as an issue,” says Fitzgerald.

In the U.S., babies born with gastroschisis have their condition identified with prenatal ultrasounds. At birth, they are whisked off to the neonatal intensive care unit for special intravenous nutrition. Their exposed organs are carefully covered by a plastic sleeve called a silo while they await surgery by a pediatric surgeon.

In Uganda, only a small percentage of expectant mothers have prenatal care that detects abnormalities like gastroschisis. Most babies born with it arrive at a major health center too late, dehydrated and with swollen or dying bowels.

Even if a mother in Uganda knew her baby would need urgent medical attention, going to a hospital isn’t always an option. Though basic care at government hospitals is free, it doesn’t include many procedures, medicines or meals. Some families keep their infants in the hospital for as long as they can, but see no choice but to take the baby home with them once money for food runs out.

For many parents in Uganda, taking a baby to the hospital poses a real tradeoff, Fitzgerald points out. “By making that choice, that might mean not sending your other kid to school that year,” she says.

For the babies who stay, there is no access to intravenous nutrition known as TPN, which infants in American hospitals would receive for several weeks. Ugandan hospitals cannot afford the protective silos, which cost about $280 apiece in the U.S. There are no automatic suction machines, so mothers typically have to perform suction manually every two hours—an exhausting task for someone who just gave birth. Nor are there infant-sized tubes and pumps, so babies sometimes end up bloated from adult doses of fluids.

When the power goes out, staff must trundle the babies—though there aren’t enough incubators for all of them—over to another ward in hopes of finding electricity to power the oxygen machines. And there are other barriers, including high patient-to-nurse ratios and a glut of pediatric patients awaiting surgery.

The power of hope

Despite these giant challenges, Wesonga and Fitzgerald knew change was possible. “I think the team in Uganda really came together and started saying, ‘We know we can’t get all of these babies to survive, but we have to start somewhere,’” says Fitzgerald.

They had tried different things at Mbarara—ways to feed the infants without relying on TPN, for instance, and improvised silos made of surgical gloves. But what made the most difference was that first baby who lived, proving that survival was possible in an under-resourced setting.

Even Nathaniel’s mother believed her child would die. But as a delighted Wesonga watched, day after day, he kept going. Surgeons managed to push his gut back in and soon he started breastfeeding and passing stool. The baby’s resilience inspired his mother to begin calling him “Miracle.”

“My favourite baby in the world!” Wesonga writes about the boy, who she says “survived and gave us hope again for all the other gastroschisis babies and mothers.”

That hope was powerful. It was enough to convince other doctors and medical professionals at Mbarara Regional Hospital that something could be done to help babies like Nathaniel. “Since then it’s just changed everything,” Wesonga says. “Now if a baby with gastroschisis comes in, everyone is interested and tries to do something.”

That attitude shift paid off. Of the next 17 babies born with gastroschisis in that hospital, 10 survived. “We shall get there, slowly,” says Wesonga. “I think there’s hope. There’s really hope.”

Wesonga continues to check in with her hospital colleagues back in Uganda as she finishes her fellowship training in Canada with support from Fitzgerald's global surgery group—a collaboration between pediatric surgeons in several academic centers in North America and Uganda.

The group continues to engage the Ugandan surgeons to foster learning and advise on best practices and processes. It has brought fellows to Duke for intensive care rotations that aren’t an option in their country, and has sent the Ugandan fellows to present at surgical conferences. The doctors all stay connected through a WhatsApp group they use to discuss case studies, ask questions and share wins.

Fitzgerald started a nonprofit called Partners in Pediatric Surgery to help fund the group’s work of training surgeons in sub-Saharan Africa. She also tasked students in a Duke engineering class to come up with a silo that could be manufactured solely out of materials found in Uganda. “And they did!” she says. The students came up with a method of producing the organ-saving supplies for two U.S. dollars each.

Their creativity, and especially the resourcefulness of the Ugandan surgeons, inspires Fitzgerald so much that it has even changed her own practice—doing smaller procedures at the bedside instead of in the operating room, for example. The way the Ugandan surgeons sterilize and reuse sutures and sticky pads over and over again, the tiny amount of trash they generate during an operation and the ways they’ve found to do procedures without exposing a baby to anesthesia have all left an impression.

“They have things to teach us,” Fitzgerald says. “We kind of have this mindset like we know how to do everything and are the ones to go there and teach them. But in reality, they have a lot to each us about taking care of patients and using our resources well.”