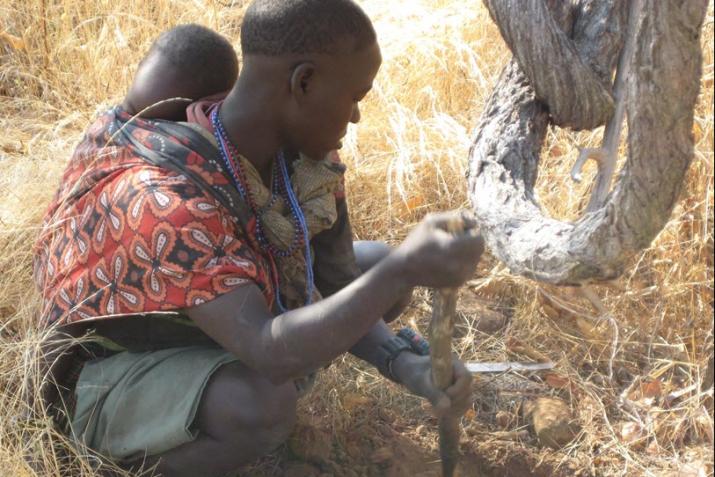 A Hadza woman digs for wild tubers while carrying her baby on her back.

Duke Global Health Institute professor Herman Pontzer doesn’t have a problem with the paleo diet—some people thrive on it, he acknowledges—but he’s quick to point out that it’s a misnomer. Touted as a return to our nutritional roots, this popular diet promotes the consumption of lean meats, fish, fruits, vegetables, nuts and seeds and discourages people from eating carbohydrates. But Pontzer, an evolutionary anthropologist who studies modern-day hunter-gatherers, says traditional diets vary widely, and the vast majority of them include a high percentage of carbohydrates.

Despite their carb loading, though, hunter-gatherers are among the healthiest people on Earth. Pontzer, whose research focuses on energy expenditure, has spent much of his career trying to figure out the mechanisms behind their good health, including food intake and physical activity. He believes we have a lot to learn from hunter-gatherers about what constitutes a healthy lifestyle.

Similar to our Paleolithic ancestors, today’s hunter-gatherers source their food entirely from the earth and wild animals, and they’re physically active for most of each day. For instance, the Hadza, a hunter-gatherer group in northeast Tanzania that Pontzer has studied for the past ten years, spend their days walking eight to 12 kilometers, climbing trees and digging for root vegetables. Their diet consists of various meats, vegetables and fruits, as well as a significant amount of honey. In fact, they get 15 to 20 percent of their calories from honey, a simple carbohydrate.

The Hadza tend to maintain the same healthy weight, body mass index and walking speed throughout their entire adult lives. They commonly live into their 60s or 70s, and sometimes 80s, with very little to no cardiovascular diseases, high blood pressure or diabetes—conditions that are rapidly growing in prevalence in nearly every corner of the world.

It’s a given that people who eat reasonable portions of healthy, wholesome foods and exercise regularly, like the Hadza, generally enjoy better health than those who overeat, consume processed foods and lead a sedentary lifestyle. But one of Pontzer’s central research questions was whether hunter-gatherers burn more calories than their inactive counterparts in industrialized societies.

What he and his colleagues found was so surprising that they initially thought they’d made a mistake: despite their extraordinarily active lifestyle, the Hadza expend the same amount of energy as their Western counterparts.

“Your body finds different ways to spend the calories when you’re less active,” says Pontzer, an associate professor of evolutionary anthropology. “Exercise is really important because it changes the way your body spends calories, not because it changes how many overall calories you spend.” As we increase our physical activity, he says, our bodies work to keep total energy expenditure at a set point. For example, the calories we burn while exercising can help decrease the amount of energy our body expends on inflammation.

That means that while exercise provides a host of health benefits, such as lowering the risk of cardiovascular diseases and relieving stress, weight loss isn’t one of them—contrary to popular belief.

“Exercise is one of the least effective tools for weight loss,” says Pontzer. “We have to start thinking about diet and exercise as two different tools for two different jobs. Focus on your diet to control your weight. Focus on exercise to do everything else: heart health, cancer reduction, healthy aging.”

Any diet can work as long as you’re able to maintain a healthy weight on it, Pontzer says. He and his team examined the diets of 260 traditional populations, and they found that the distribution of plant-based versus animal-based food consumption was all over the map.

“There’s no such thing as the ultimate healthy diet,” he says, but he points to a few common elements across hunter-gatherer diets that could serve us all well, such as a high-fiber diet. The Hadza, for example, typically take in approximately 100 grams of fiber per day, about five times more than an American adult usually gets. Fiber contributes to strong microbiome health, helps us avoid blood sugar spikes and makes us feel full on fewer calories. Hunter-gatherers also consume nearly a third less calories per bite on average than people in industrialized societies.

A natural diet and high levels of physical activity clearly contribute to the enviable health of hunter-gatherers and other populations living in subsistence economies, but Pontzer thinks something else is also at play: a lifestyle that fosters positive mental health. “They don’t worry about their careers or ending up poor, and they spend their days outdoors with friends and family they’ve known their whole lives,” he says. “Those factors are generally associated with feeling happy, and happiness plays a major role in overall health. I think their mental health would be a great new angle to explore; I’d like to know how it all works together.”

For his next project, though, Pontzer will head to northern Kenya to learn how the Daasanach, a pastoralist group, stay healthy, and how their diet and exercise habits are changing as they transition into more of a village setting. He’ll also continue his work with the Hadza in Tanzania and other groups in South America. “I think we’ve really only hit the tip of this research,” he says. “Hunter-gatherers and people in other subsistence economies around the world have so many lessons to teach us about what to eat, how to move and how to avoid disease.”