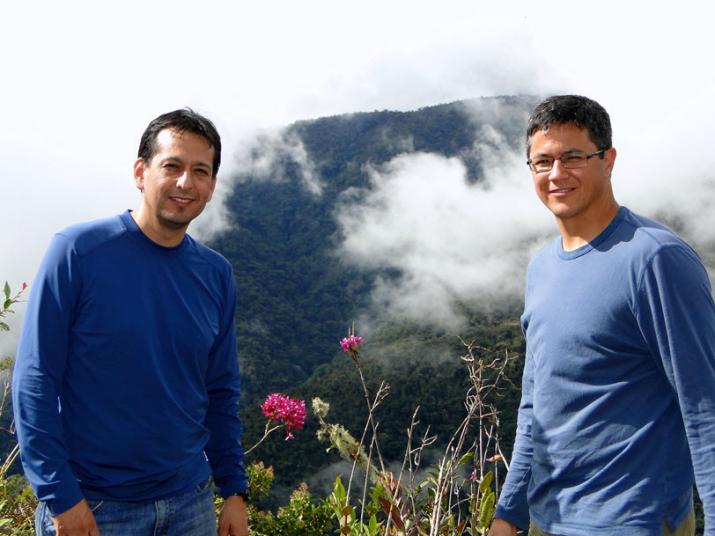 Ernesto Ortiz (left) and William Pan at the Wayqecha Cloud Forest Biological Station at the edge of the Manu National Park in Cusco, Peru, one of the world’s biodiversity hotspots.

Ernesto Ortiz, a Peruvian research project manager at the Duke Global Health Institute since 2012, began his career as a medical doctor in Peru. After practicing primary care for a couple of years and completing a year of required public service as a doctor with the Peruvian Air Force, he set his sights on additional training in orthopedic surgery in the United States.

But when he arrived in the States and met people who were working in public health, his vision for his future changed. He found himself drawn to public health because “in medicine, you can treat only one patient at a time, but in public health, you can address the health problems of many people at the same time.” Before long, he was enrolled in a Master of Public Health program at the University of Iowa.

Ortiz describes his role as associate professor William Pan’s “right hand,” providing support for multiple environmental health-related research projects in Peru. We recently talked with him to learn more about his journey from medicine in Lima to global health in Durham and hear what aspects of his work he thinks have had the greatest impact.

Tell us about your path from the University of Iowa to Duke University.

My mentor at the University of Iowa was Dr. Gregory Gray [now a professor of medicine, global health and environmental health at Duke], who ran the university’s Center for Emerging Infectious Diseases at the time. His lab mainly did research on zoonotic influenza, and that’s how I got into infectious diseases research.

He’s a retired Navy Medical Corps officer, and he had connections with the Naval Medical Research Unit in Lima (NAMRU-6), so he helped me arrange a practicum there, looking for exposure to zoonotic influenza in poultry workers in Peru. I loved working there, and they offered me a position, but I had to finish my degree, and I had already committed to working with Dr. Gray back in Iowa. So for one year, I did research on exposure to avian influenza and swine influenza in poultry and swine workers in the U.S. midwest.

After that year, I moved back to Peru with my fiancée to work with NAMRU-6 again. Even though I was born in America, I grew up in Peru, so a big part of my heart is there, and I want to make as much of an impact as I can in that region. At NAMRU-6, we were trying to learn more about how influenza behaved in different areas—the jungle, the coast, the mountains, all different climates. The main objective for NAMRU-6 is to learn about diseases that can affect U.S. troops, but my research there involved a lot of working with Peruvian authorities and building capacity in communities.

I spent four years there, and it was a great experience. I was advancing my career and I didn’t want to leave, but my wife was ready to take the next steps in her nursing career. She ended up in Duke’s nurse practitioner program, and I started trying to make connections with people working in public health and global health in the Triangle. I found the DGHI website, and I learned about a One Health course that was open to the public. At one of those lectures, I ran into Bill Pan, who I’d met in Peru through his work with Johns Hopkins University. As it turned out, he had just started a faculty position at Duke.

When I asked him if he needed any research support, he said, “I don’t have any grants yet. But there’s an empty office next to mine, and you can sit there and start meeting people, and maybe something will work out.” That was in 2012, and things just kind of grew from there.

How does your background as a medical doctor help you in your global health work?

It helps a lot. For one, I still have my medical license in Peru, so when I go to the field, I get to practice medicine sometimes. Most of our research is in remote places, like the Amazon, where there aren’t any healthcare providers. So, for example, if someone has a diarrheal infection or respiratory infection, I can do an assessment and try to diagnose them and prescribe some medicine. I’ve also stitched up a cut from a machete. I hadn’t done something like that in a long time, so I was nervous, even shaking a little, but it’s kind of like riding a bike—you don’t really forget how to do it. My medical training also helps me understand the human health aspects of our research better.

But in addition to these practical things, having a Peruvian doctor on the research team helps us build trust among the people in the communities. When we show up in these remote places without really knowing anyone, and then people see that we’re able to help with some of their health problems, whether it’s giving someone stitches or tapping into my network to connect people with other healthcare providers, it opens doors for us.

Of all the work you’ve done in Peru through DGHI, what do you think has made the most profound impact on the communities you’ve worked with?

I think one of the most powerful things we’ve done has been building a very strong network at every level, not only with the local community, but with the local, regional and national authorities. Usually when we start working in a community, we introduce ourselves to as many people as we can—not just health authorities, but the leader of tribe, the head of the community, the mayor of the town. And because of our open communication and the close relationships we’ve established, we’ve been able to communicate preliminary results to them without having to wait months or years until our publications come out.

That’s actually how we influenced the Peruvian government in 2015 to declare a state of emergency in the region about the devastating effect of artisanal gold mining in the Amazon on people’s health. That measure created awareness and put the issue of mercury exposure in people’s minds. And it also led to a push for building fish farms in the area so people can get fish from an environment that isn’t contaminated.

Working in research, one of the things I’ve learned is that it’s a huge challenge to narrow the gap between research and policy. It’s difficult to communicate research results in a way that will influence policy and ultimately improve human health. Policy makers are busy with their own things, and researchers are known not to be very good communicators. Often, a researcher’s success is measured by our publications in scientific journals, but most people—and certainly not the policy makers—don’t have access to these journals.

It would be great to see a shift on this, because if you’re in public health or global health, the ultimate goal is to help improve people’s health. One way to do this is through shorter, more accessible reports, like policy briefs. Another way, which we’ve had a lot of success with, is building a strong network in the communities where you’re doing the research and sharing your results and recommendations directly with local, regional and national decision makers.

Learn more about the work Ortiz and his team are doing in Peru.