Pursuing medicine and policy, with a heavy dose of global health, made for a curious mix of discipline and freedom 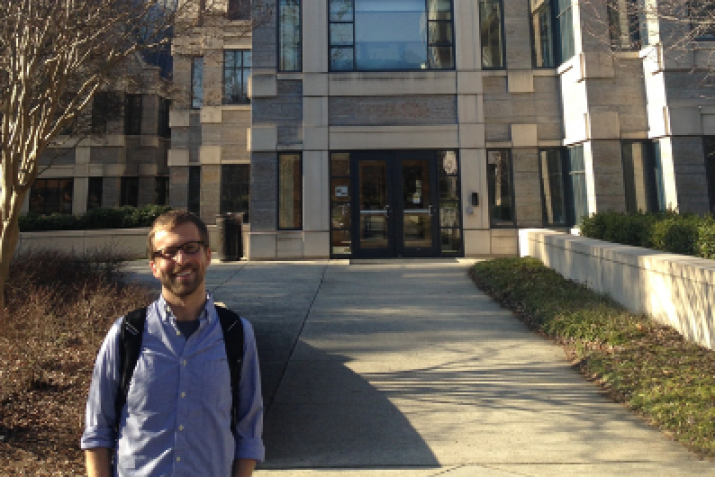 Joshua Rivenbark stands in front of the Sanford School of Public Policy at Duke (before the COVID-19 pandemic).

Joshua Rivenbark's years at Duke have been a bit like a three-tiered layer cake. On top of medical school studies and training, he pursued a doctoral program at the Sanford School of Public Policy and participated in a Doctoral Scholars program at the Duke Global Health Institute.

His stacked agenda at Duke gave him the chance to participate in interdisciplinary research projects that melded medicine, public health policy and global health together. Along the way, he was able to delve into an area of deep interest: how social and economic inequalities influence population health disparities.

Rivenbark says he loved the contrasts he experienced while studying medicine and pursuing doctoral research at the same time. One offered the strict rigor of routine while the other gave him independence to pursue his own passions.

“Med school is demanding of your time and scheduling, while grad school is like being put in a raft in the middle of the ocean and being given the freedom to go find land,” he jokes. “It’s a lot more independent and really makes you learn to take care of yourself and support your own interests.”

In fact, the freedom to explore areas that interested him led Rivenbark to DGHI and a research opportunity in Cambodia. He remembers it vividly: It was the summer after his first year of graduate school and he’d been doing some work with Kathryn Whetten, professor of public policy and global health. One day she said to him, “How do you feel about going to Cambodia next week and being part of this research project?”

Rivenbark jumped at the opportunity. Over the course of that summer, he studied the health conditions of children living on the streets of Battambang, Cambodia, collaborating with a local nonprofit organization that was working on the ground with Whetten’s research group.

That summer’s work led to his application for the Doctoral Scholars program — a program that gives Duke PhD candidates the opportunity to pursue research projects with a global health angle on their field. Through the program, Rivenbark was able to return to Cambodia where he learned more about the experiences of vulnerable children and how lingering societal stigma continues to play a role in healthcare disparities once they become young adults.

Documenting the experiences of people who are marginalized by society is a connective thread that ties together his research. He also worked in France, researching healthcare discrimination of immigrants there. That work made up one of the three papers he submitted as part of his dissertation at the Sanford School.

Rivenbark has made his mark at Duke — he’s the first student to pursue a dual doctoral degree in medicine and public policy. He is also the first Duke medical student to be a part of the doctoral scholars program at DGHI.

Prior to coming to Duke, he earned an undergraduate degree in biochemistry from Iowa State University in 2010 and then spent two years conducting immunology research at Washington University in St. Louis School of Medicine.

This weekend, Rivenbark will be celebrating graduation virtually along with the rest of the class of 2020.

“It’s a strange time to graduate” in the midst of the COVID-19 pandemic, he says, but he’s excited for the future. He is getting married this month and will begin his residency in internal medicine at the University of Pennsylvania this summer. He hopes to ultimately land an academic job where he can continue to conduct research.

“I’ll be continuing the theme of what I have been doing so far,” he says, looking at health disparity research with an international focus on vulnerable communities often underserved and stigmatized by healthcare systems.