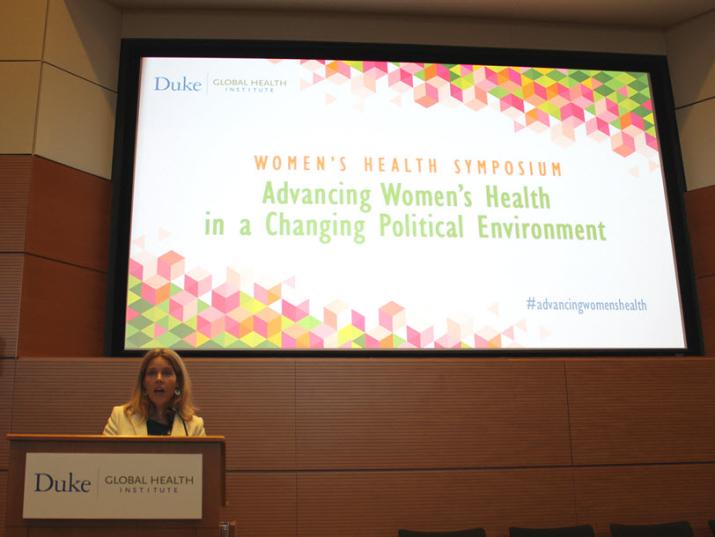 On Friday, October 20, the Duke Global Health Institute co-hosted a symposium, “Advancing Women’s Health in a Changing Political Environment,” on the Duke University campus. The symposium featured women’s health and policy experts from Duke and beyond.

“Our goal with the conference is to engage Duke and the wider Triangle Community around women’s health, with a specific focus on reproductive and sexual health,” Huchko said in her opening remarks. “We don’t just want to talk politics, though. We want to learn from each other and find ways to work together to advance women’s health and rights both domestically and internationally.”

Jen Kates provided a brief history of global health policy and funding beginning with the establishment of the President’s Emergency Plan for AIDS Relief (PEPFAR) under President George W. Bush in 2003. This program, she said, became the start of a “Golden Age of Global Health,” in which funding increased significantly and global health assistance received strong public support and bipartisan support across administrations and in Congress.

The election of President Trump, she says, has brought many concerns and uncertainties about the future of global health funding. The 2018 budget request reflects a $2.5 billion dollar global health funding cut, from $10.4 billion to $7.9 billion, with funding for family planning eliminated. In addition, she said, we’re seeing a growing partisan gap in global health support, increasing national isolationism, differences between the White House and Congress on foreign aid policy and many new policy measures and restrictions. 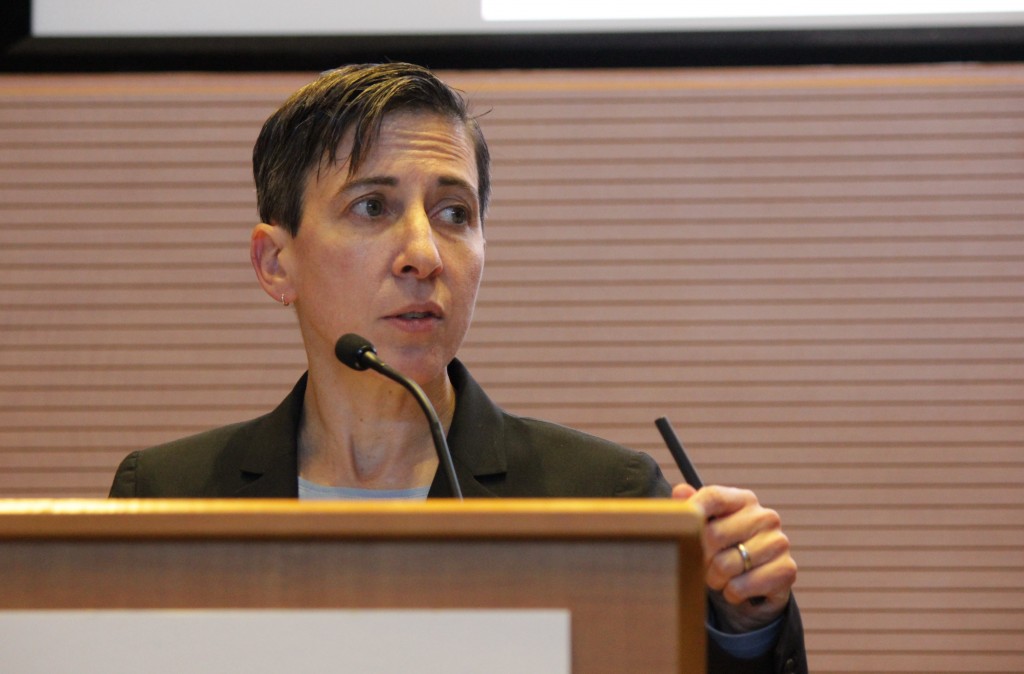 Kates discussed the anticipated impact of a decrease in U.S. global health assistance on projected global health funding from donors over time, based on modeling conducted by the Kaiser Family Foundation. “Even a one-year cut by the U.S.,” she said, “would really have an impact on funding in the next decade, since the U.S. is such a big part of the [global health funding] pie.”

She emphasized the “human impact” of a one-year cut, which could have detrimental effects: up to nearly 200,000 additional HIV infections; up to three million more abortions; up to 31,000 maternal, newborn and child deaths and up to 24 million fewer women and families receiving contraceptives.

Kates says we’re in an era of uncertainty. The question, she says, is whether the changes being implemented under the Trump administration will remain “along the margins” or “cut to the core” of U.S. global health policy and funding—or somewhere in between. In some cases, such as family planning and reproductive health, she believes cuts to the core are already evident.

Despite the ACA’s shortcomings, he said, it’s benefiting North Carolina citizens. Half a million North Carolinians who did not previously have health insurance now have it through the ACA, and nearly one million senior citizens are receiving preventive care through ACA provisions. 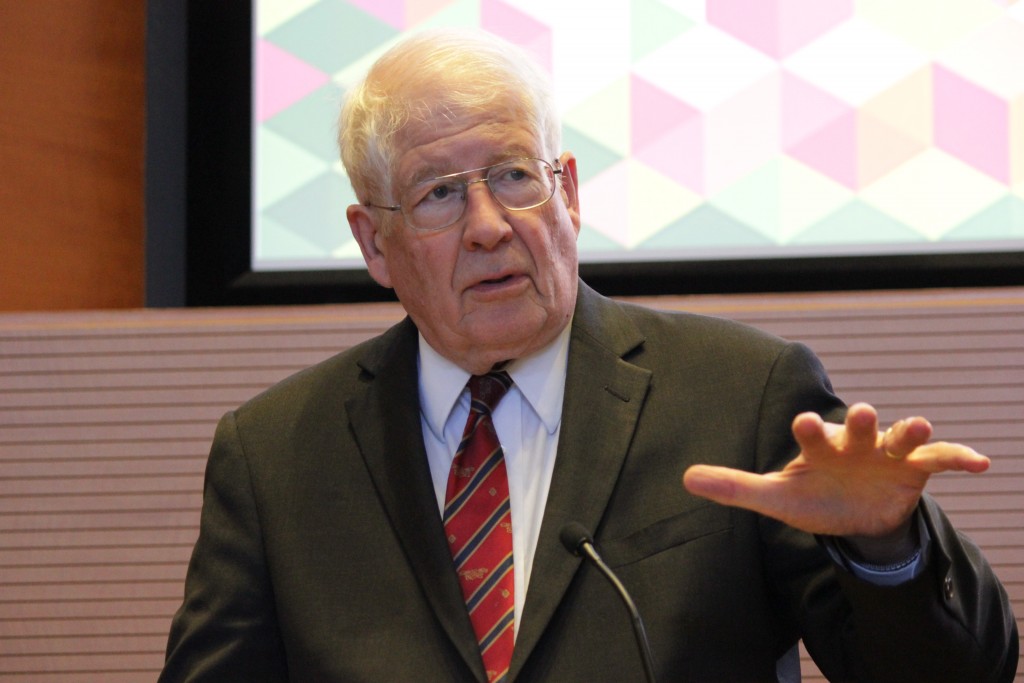 Price expressed concern over some of the changes and proposed changes to the ACA that would prove harmful to Americans—such as cutting the enrollment period, slashing funding for advertising and outreach, and especially ending subsidies that enable insurers to provide low-income enrollees with lower-cost insurance. “That is an absolutely critical lynchpin,” he said.

He spoke specifically about the anticipated detrimental effects of recent changes and proposals on women’s health, such as restricting women’s access to birth control and reinstating the Mexico City policy (also known as the “Global Gag Rule”). “Maternity care and newborn care and preventive care are not frills or luxury items; they’re quite basic,” he said, adding later that “birth control is health care, pure and simple.”

In addition to outlining challenges, Price cited several advocacy groups, such as the pro-choice caucus, that are working hard to move a positive women’s health agenda forward. 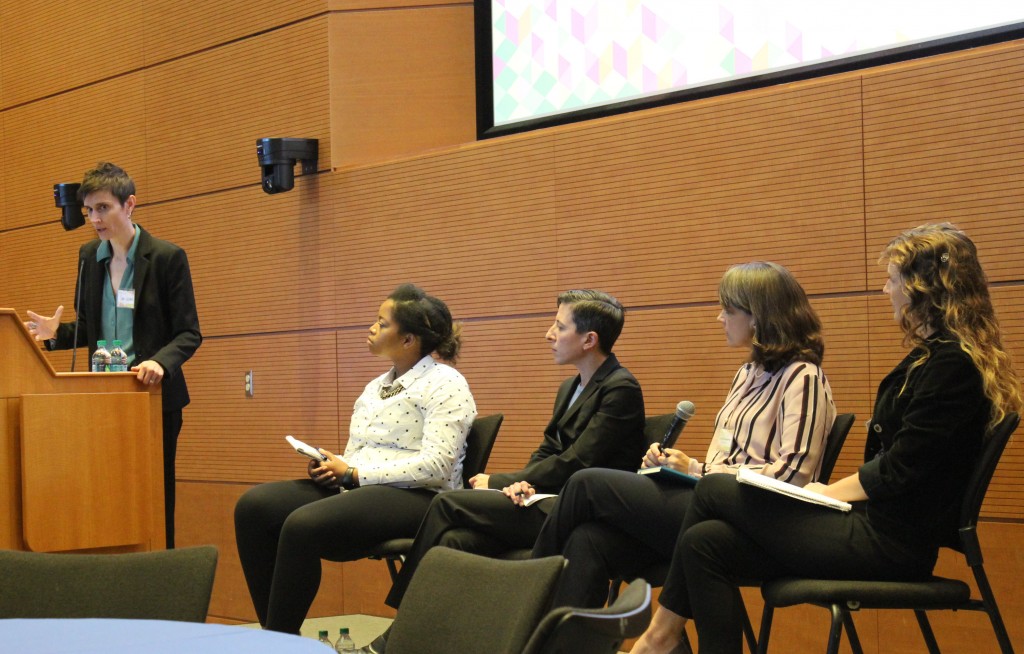 The second panel, moderated by Gavin Yamey, professor of the practice of global health and public policy and director of the Center for Policy Impact in Global Health, focused on U.S. and international policy impacts on access to family planning, abortion and maternity care. Panelists included: 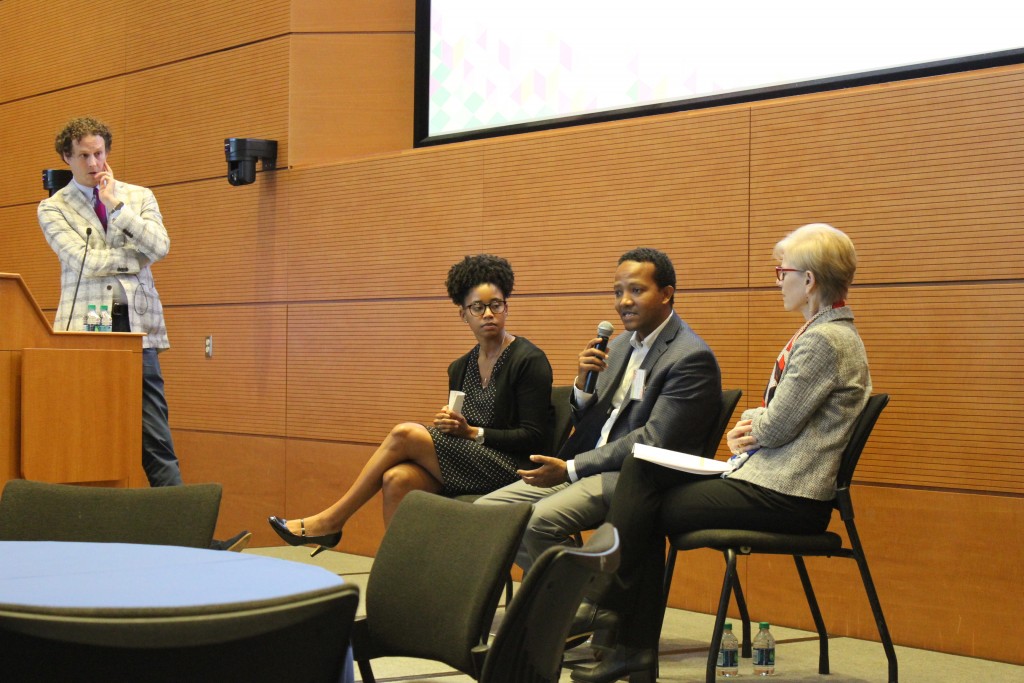 “We hope that the energy and expertise we witnessed at the symposium galvanized attendees to continue the important work they are doing and generate new and creative collaborations to advance the important issues in sexual and reproductive health around the world,” said Huchko.

The symposium was co-sponsored by:

Kathryn Whetten, professor of global health, public policy, community and family medicine and nursing and director of the Center for Health Policy and Inequalities Research, co-organized the event with Huchko.

Videos of the keynote talks will be available soon on DGHI’s YouTube channel.

View more photos of the event.