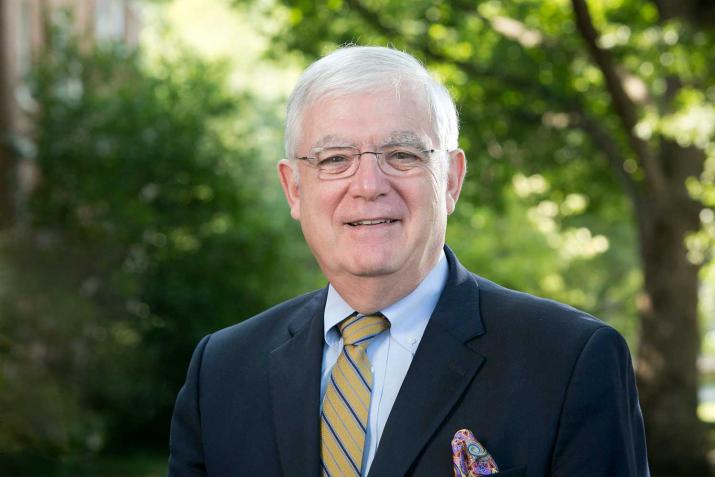 Few people have played a more important role in transforming Duke into a truly global institution than Merson. An international leader in global health and DGHI’s founding director, Merson has extended the reach of the university, including the School of Medicine, into the farthest corners of the planet.

Merson, who announced last fall that he will be stepping down effective June 30, founded DGHI in 2006 with the goal of solving complex global health challenges, training the next generation of global health scholars, and reducing the devastating impact of health disparities worldwide.

A committed advocate of interdisciplinary collaboration, Merson has partnered with collaborators throughout the university, and indeed throughout the world, to build DGHI into one of the world’s leading institutions of its kind. He is a committed educator and mentor whose example inspires countless students, trainees, and colleagues.

In addition to his role in building DGHI, Merson has served as vice chancellor for Duke-NUS affairs and vice president and vice provost for global affairs. He has recently led projects to improve health care delivery in sub-Saharan Africa and to expand global health research, education, and policy in China.

Outside Duke, he has held numerous leadership roles, including executive director of the World Health Organization (WHO) Global Program on AIDS, director of the WHO Diarrheal Diseases Control Program, and chief medical epidemiologist at the Cholera Research Laboratory in Dhaka, Bangladesh.

Merson has been recognized for his dedication, excellence, and leadership with numerous honors and awards, including the Arthur S. Fleming Award for Outstanding Federal Service and the Surgeon General’s Exemplary Service Award. He is the recipient of two honorary degrees and a member of the National Academy of Medicine and numerous professional societies, and he holds board and committee positions with a number of leading national and international organizations, including the Fogarty International Center at the National Institute of Health and WHO.

Before joining the Duke faculty in 2006, Merson was dean of the School of Public Health, professor and chairman of the Department of Epidemiology and Public Health, and director of Center for Interdisciplinary Research on AIDS at Yale University.

This article was adapted and republished from the original story on the Duke School of Medicine website.