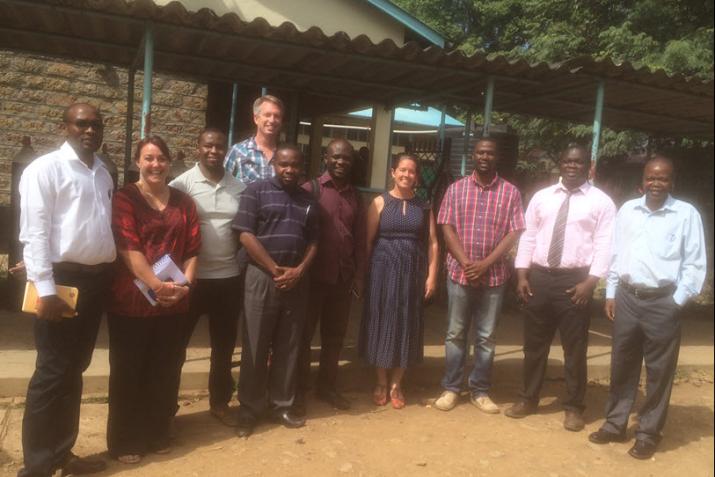 The EPiTOMISE team at a recent site visit to Homa Bay, Kenya, including partners from Duke, Moi University, Indiana University and the Homa Bay County Referral Hospital. Steve Taylor is fourth from left, and Wendy Prudhomme O'Meara is fourth from right.

The goal of the study is to provide an evidence base for the use of new strategies to protect children with SCA from malaria and to reduce the morbidity of SCA in malaria-endemic areas in Africa.

Health of Children with SCA: A Critical Issue

Very little medical research has explored health issues that children with SCA face, which has led to high rates of mortality and morbidity. More than 240,000 children with SCA are born in Africa annually. Without sophisticated medical care, many of these patients die at young ages: in a Western Kenya cohort of newborns, 25 percent of children with SCA died before their third birthday.

Studying malaria prevention within this demographic is especially important because of the relationship between sickle cell anemia, sickle cell trait and malaria.

Sickle cell anemia, a condition that deforms red blood cells, occurs when a child inherits two defective hemoglobin genes, one from each parent. Sickle cell trait occurs when a child only inherits only one defective hemoglobin gene. A person who has sickle cell trait (1) has regularly shaped red blood cells, (2) typically does not experience symptoms associated with sickle cell anemia and (3) is nearly completely protected from malaria.

Taylor—the principal investigator—and Prudhomme O’Meara will be capitalizing on the clinical trial expertise of the Duke Clinical Research Institute and existing collaborations with Moi University in Kenya to enroll children with SCA in the study.

Research will be conducted in Homa Bay, Kenya, which is endemic for falciparum malaria. Children in the study will be randomly assigned to one of three treatment options: daily Proguanil (the current standard of care), monthly sulfadoxine/pyrimethamine-amodiaquine, or monthly dihydroartemisinin-piperaquine (DP).

Study participants will be monitored for one year for incidences of malaria and painful events due to SCA. Additionally, malaria strains sampled from the Homa Bay area will be analyzed to determine if evolutionary pressure from the new antimalarials is causing antibiotic resistance.

EPiTOMISE is particularly innovative since the efficacy of DP has not yet been studied in diverse groups of high-risk patients. Additionally, the study will contribute to the inadequate body of research surrounding health of children with SCA in Africa and hopefully serve as a base upon which to expand research on this demographic.

A Platform to Improve Health Among Children in Kenya with SCA

The team hypothesizes that both of the newly introduced monthly antimalarials will outperform the current standard of care in preventing cases of malaria and painful events related to SCA. Their goal is for this evidence to influence standard malaria prevention practices among children with SCA.

Taylor is also interested in future possibilities to improve the health of children with SCA. “Although for this project, we’re primarily interested in preventing malaria, we hope that malaria is just the beginning of the conversation, and that our team can grow in new directions to better serve these kids,” he said. “The population of Africans with sickle cell anemia is growing every year, and we need to tailor supportive medical care to local conditions to serve these patients.”