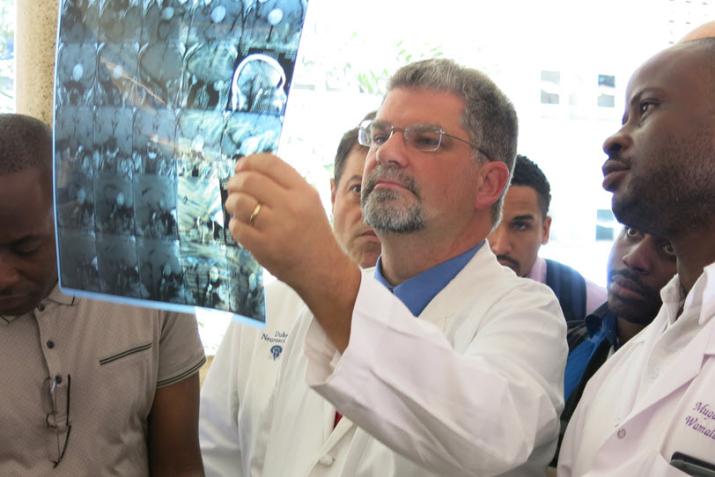 This project builds on a 10-year collaboration between Duke, Makerere and Mbarara Universities, led by Michael Haglund (center), to build state of the art neurosurgery units at Mulago and Mbarara Hospitals.

In Uganda, where about 700,000 people are living with untreated epilepsy due to traumatic brain injuries and birth defects, there are only four neurologists who can treat the disease with medication. The capacity to monitor epilepsy with electroencephalogram (EEG) or perform epilepsy surgery—which can cure up to 75 percent of epilepsy patients—is currently non-existent.

Michael Haglund, distinguished professor of neurosurgery, neurobiology and global health, is determined to change the game for Ugandan epilepsy patients, and he’s laying the groundwork with a new grant from the UCB Societal Responsibility Fund to establish the Uganda Epilepsy Centers of Excellence.

“With road traffic accidents, brain tumors and childhood epilepsy, a huge burden is laid on families that is exacerbated by the stigma of epilepsy,” said Haglund, who is also chief of the Duke Global Neurosurgery and Neurology division. “We hope to develop the capacity to diagnose and treat—both medically and surgically—the large number of Ugandans afflicted by epilepsy.”

This project builds on a decade of collaboration between Duke, Makerere and Mbarara Universities, led by Haglund, to build state of the art neurosurgery units at Mulago and Mbarara Hospitals. The project goals include:

”Currently there is no real ability to monitor and diagnose epilepsy anywhere in the country,” said Haglund. With the help of Duke neurologists Brad Kolls and Danny Laskowitz and a partnership with Cadwell Industries, he said, they’ll be able to extend epilepsy monitoring beyond the hospital setting. They plan to send teams of neurologists and local social and medical workers to villages to identify patients with epilepsy who can then be referred to the main centers for treatment.

In addition, under the mentorship of Deborah Attix, associate professor in psychiatry and behavioral sciences, Master of Science in Global Health students Nadine Sanchez and Payal Chakraborty, will perform a country-wide prevalence study this summer to determine the burden of epilepsy in Uganda.

“We intend to have the Uganda Epilepsy Center of Excellence program running at full speed within three years,” said Haglund. “And we hope to expand the project to other regions of the country within five years, based on the needs we identify through a systematic nationwide epilepsy survey.”

The UCB Societal Responsibility Fund is a joint venture between UCB, a global biopharmaceutical company with a focus on neurology and immunology, and the King Baudouin Foundation, which seeks to strengthen the capacity of organizations and individuals with a focus on areas such as poverty, social justice, health and civic engagement. The grant is for a total of €450,000 over three years.

Learn more about the Duke Global Neurosurgery and Neurology division.