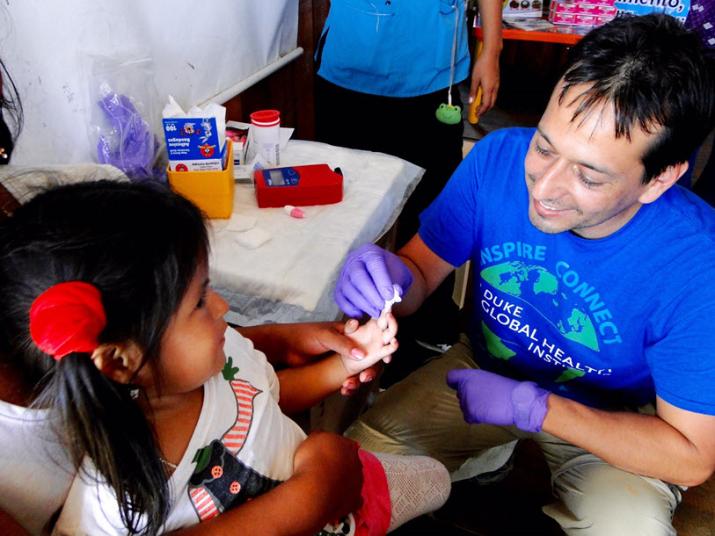 DGHI research anaylst Ernesto Ortiz tests a child for anemia as part of the mercury exposure study that led to the state of emergency.

It’s gratifying when global health research affects policy. This was the case when Peru’s federal government declared a state of emergency after the publication of a report by DGHI researchers showing the distressing impact of gold mining on the health of people living downriver from mines in the Peruvian Amazon.

Mercury used in the gold extraction process ends up in waterways and accumulates in fish—a key source of food for people in Peru’s Madre de Dios region. William Pan, assistant professor of global environmental health, and his colleagues found high levels of mercury in hair samples in 40 percent of the residents they tested. According to Pan, the presence of mercury in hair indicates a person’s exposure to mercury through something they ate.

Mercury can have toxic effects on the nervous, digestive and immune systems, and it’s particularly dangerous to developing fetuses. The World Health Organization considers mercury one of the top ten chemicals representing a major public health concern.

The Peruvian government’s response includes providing the local population with a protein source other than fish. They’re also considering distributing quinoa, the consumption of which has been correlated with lower mercury levels.