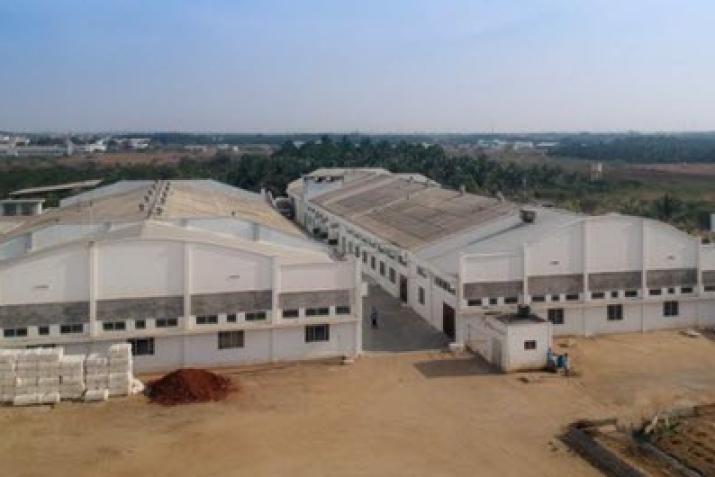 The textile mill in Coimbatore, India, where the prototype sanitation system is being tested in a real-world setting. Photo by Shamsheer Yousaf.

Researchers at Duke University have installed an experimental "reinvented toilet" at a textile mill in Coimbatore, India, to serve as a real-world testing site. The leaders of the new decentralized waste processing system hope that the trial will lead to commercialized solutions produced through the Bill & Melinda Gates Foundation's Reinvent the Toilet Challenge.

The system is designed to reuse water, a huge plus in drought-prone areas. And while it does require a modest power supply, these needs can be met through solar panels or other off-grid solutions. The end goal is a stand-alone system that can help meet the needs of the 2.4 billion people who lack access to safe and effective sanitation.

"This is the first wave of our systems being installed at high-profile sites for the Gates Foundation," said Brian Stoner, who started the program as a Senior Fellow at RTI International before joining Duke as a research professor and director of the Center for WaSH-AID (Water, Sanitation, Hygiene and Infectious Disease).

"Data suggest that women are disproportionately affected by poor sanitation options, so we're focusing our first full system test on gaining their acceptance and supporting their needs," said Stoner, who also holds a faculty appointment at the Duke Global Institute. "Our aim is to be gender-transformative, empowering women and girls with the knowledge and choices to enhance their health, education and quality of life."

Image
The women’s dorm at the textile mill in Coimbatore, India, where the prototype sanitation system is being tested in a real-world setting. Photo by Shamsheer Yousaf.

The women’s dorm at the textile mill in...

With the help of Namrata Jha, the Bangalore-based director of Duke University India—launched in 2017 to help foster such collaborations—the researchers installed the sanitation system in a women's dormitory at a textile mill in Coimbatore, India. The project began with a survey of more than 2000 households and 20 focus groups to help understand the social and user requirements of any new sanitation technology.

Key takeaways included that, while the facility needs to be safe, its look and feel is just as important. They also found that something as simple as having a chute to discreetly dispose of feminine hygiene products can have a major effect on the community.

"More than a quarter of Indian women drop out of school when they reach puberty, due in part from the lack of facilities to safely and discretely dispose of feminine hygiene products," said project co-leader Jeff Glass, a professor of electrical and computer engineering at Duke. "Plus the women of the family strongly influence what facilities the family uses, so we're focusing on developing the technology in response to their needs."

The technology works by using a sort of corkscrew conveyor belt to separate solid and liquid waste. The solids are then dried and burned using a novel combustion unit designed by partners at Colorado State University to produce energy, which is used in turn for both drying more solid waste and powering the electrochemical disinfection of the liquid waste. While the treated liquid is not drinkable, it can be safely discharged or reused for flushing.

Image
The treatment hardware for the prototype sanitation system now undergoing testing at a textile mill in Coimbatore, India. Photo by Shamsheer Yousaf.

The treatment hardware for the prototype...

The first few years of the project were spent in laboratories at both Duke and RTI working out the technological needs of the system in highly controlled environments. A prototype was then installed at the CEPT University in Ahmedabad, India, where researchers could control how much the system was used and take it offline anytime they needed. The installation in Coimbatore is a significant step forward because it will spend the next year in full operation in a real-life setting.

"This installation will really put the sanitation system through its paces," Stoner said. "Success in a laboratory setting is an important first step, but testing it in more realistic conditions will help show where we can still make improvements."

Besides putting the technology to the test, the installation in India is also key to learning how to gain community acceptance. The women workers will have their choice between regular toilet facilities and the experimental system. Learning which ones they prefer and why will be just as important to realizing an eventual solution, even though the sanitation technology used in the new system may be far superior to what is already available.

One example of the importance of user feedback in the development of new technologies came when people stopped using the original prototype system at CEPT because the treated water being reused for flushing looked "dirty." While it met the necessary sanitation requirements, the researchers had to find a way to make it look like the community's regular water before people would use the toilet.

Image
An interior view of the textile mill in Coimbatore, India, where the prototype sanitation system is being tested in a real-world setting. Photo by Shamsheer Yousaf.

An interior view of the textile mill in...

"This is an important year for us," Glass said. "Besides proving that our sanitation system can work and that people will use it, we're also hoping to start partnering with potential manufacturers who want to translate the prototypes into a commercial product."

The researchers have already partnered with a small business called Biomass Controls based in Connecticut, which earlier this year opened a small office in Durham, North Carolina, to help transition the technology into the field trials.

The Gates Foundation's Reinvent the Toilet Challenge was launched in 2011 to bring sustainable solutions to the 2.5 billion people worldwide who don't have access to safe, affordable sanitation. The program has provided more than 15 grants to scientists worldwide to pursue promising solutions to this health crisis.

Among those awarded additional funding after successful proof-of-concept studies were Stoner and Glass at Duke. With one system now being tested in a real-life scenario in India and a second soon to launch in South Africa, the pair hope to attract commercial investors leading up to a showcase event this fall in Beijing, China.

"Our goal is not to manufacture these systems ourselves," Stoner said. "Instead we want the Center for WaSH-AID to be a catalyst for commercialization by creating an environment that fosters collaboration between researchers and product development partners to create innovative, sustainable solutions for the global sanitation crisis."

This article was originally published on the Pratt School of Engineering website.