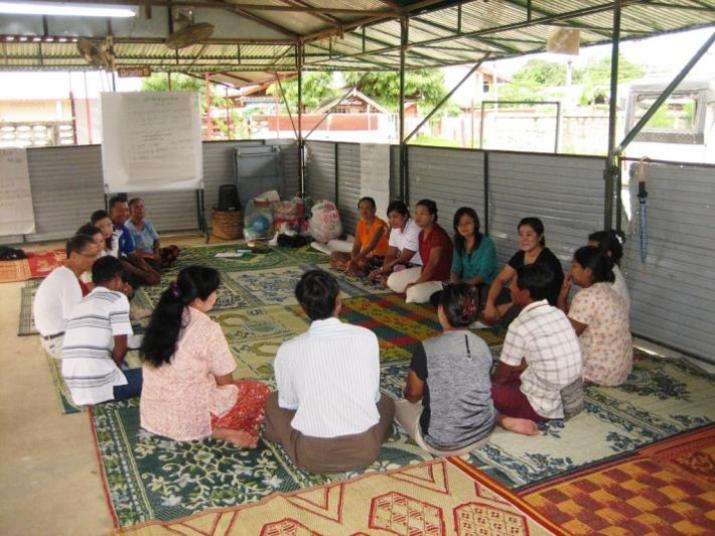 In collaboration with the International Rescue Committee (IRC), Eve Puffer, professor of global health, psychology and neuroscience, has been working to reduce violence toward children in their homes. Since 2010, this collaborative research has studied the impact of parenting practices on children growing up in communities affected by conflict, displacement and poverty.

Negative parenting behaviors, including harsh physical or verbal treatment, can harm a child’s development, physical health and mental health. On the other hand, a warm parent-child relationships and non-violent, consistent discipline can protect a child, buffering the negative effects of a stressful environment.

This research is showing that training parents in positive parenting methods can significantly decrease harsh parenting and improve parent-child relationships across different contexts and populations.

Parents of children aged three to seven met for group sessions to engage in an interactive curriculum to learn skills such as positive discipline and effective communication with children, as well as strategies for promoting academic skills.

Surveys, observational assessments and interviews showed that caregivers who received the training reported less use of physical punishments and psychological punishment such as yelling at their children. Some caregivers said that they replaced these negative behaviors with positive strategies to manage their children’s behavior.

Results also revealed overall higher quality of caregiver-child interactions, such as talking and playing together more, in the treatment group. Some caregivers also reported that their children approached them with less fear, leading to more enjoyable interactions.

The successful implementation of this community-based parent training shows that parenting interventions can be feasible and effective in low-income, resource-constrained settings.

These study results are published in the IRC Research Report, “Parents Make the Difference.”

Puffer, in collaboration with Theresa Betancourt, researcher at the Harvard School of Public Health, and Jeannie Annan and Amanda Sim at the IRC, evaluated a family skills intervention with displaced families who migrated from Burma into Thailand.

Unlike the program in Liberia, in this intervention, “The Happy Families Program,” children aged eight to 12 attended sessions with their families. Together, they learned about positive communication and teamwork, with caregivers also building skills for positive discipline.

As in the Liberia study, surveys showed that caregivers who received the training engaged in significantly less negative parenting behavior and more positive caregiver-child interactions. The intervention also led to better overall family functioning and better child behavior compared with families that did not participate. Interviews also suggested possible improvements in the caregivers’ mental health.

These study results are published in the IRC Research Report, “Building Happy Families.”

“These studies show that we can shift parenting behaviors even in a post-conflict context with very few resources,” Puffer noted. “In the short term, these interventions improved children’s day-to-day experiences with the people who take care of them. In the longer term, we hope that these changes help them to develop well physically, mentally and socially—even in the face of stressors they will continue to face.”

These novel studies contribute to a small number of studies demonstrating the impact of family programs on preventing and reducing violence against children in resource-constrained areas and on improving the positive family relationships that protect children from poor outcomes in the future.

Based on these results, the IRC recommends that governments and policymakers increase funding of positive parenting programs and make explicit commitments to parenting programs as a means of preventing violence against children. Further research is also needed to develop programs with even stronger impacts and to identify ways to scale up interventions to successfully serve larger populations.