Getting Vaccines From Airports to Arms

As low-income countries struggle to gain access to COVID-19 vaccines, Duke researchers work to address the many obstacles that stand in the way of global herd immunity. 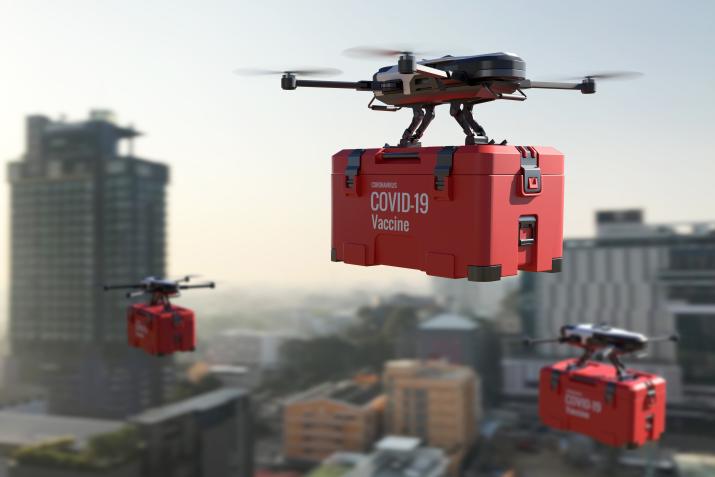 In Ghana, COVID-19 vaccines are literally falling from the sky. As part of the West African country’s plan to ensure vaccines reach people in remote villages, drones are carrying doses – as many as 2,000 per flight – from a central warehouse to health clinics in areas not easily accessed by roads.

But while the airborne deliveries are providing an efficient and creative workaround to Ghana’s geographic obstacles, drones haven’t solved its biggest vaccine problem. Like many low-income countries, Ghana doesn’t have enough vaccines to distribute, by drone or any other means.

With no vaccine production capacity or direct purchase agreements with manufacturers, Ghana has relied on donated vaccines from sources such as the World Health Organization’s COVAX facility, which delivered its first vaccine shipment to the country in February. But after wealthy nations locked up most of the early supply, doses have scarcely trickled in. Through October, Ghana had administered just 2.7 million shots, with only about 800,000 of its 31 million residents (less than 3%) reaching full vaccination.

At its current pace, Ghana won’t achieve the 70% threshold most public health experts say is necessary to quash future COVID-19 waves until 2025.

“Any bottleneck in the system affects the next steps in the distribution chain,” says Wenhui Mao, Ph.D., a postdoctoral fellow with the Duke Global Health Institute’s Center for Policy Impact in Global Health (CPIGH), which is working to help low- and middle-income countries navigate obstacles in their vaccine campaigns. “In Ghana’s case, they appear to have sufficient capacity to deliver the tiny amount of vaccine they have, but they are stuck on the first step.”

Accelerating the pace of vaccinations in places like Ghana may be the most exigent need in the ongoing fight against COVID-19. While nearly half of the world’s population has received at least one vaccine dose, wealthy nations have administered 32 times as many doses as poorer ones. Just 3.5% of people in low-income countries had gotten their first jab by the end of October, leaving hundreds of millions of people vulnerable to the disease and creating conditions for new, more potent variants to emerge.

At the Global COVID-19 Summit before the United Nations Assembly in September, world leaders set targets to close the gap by fully vaccinating 40% of the globe by the end of 2021 and 70% by mid-2022. Increased vaccine production and commitments from wealthy countries to share vaccines are expected to improve the flow of doses to low- and middle-income countries.

But as vaccine production ramps up, supply issues may only give way to other logistical snarls in the path of vaccinating people at such a massive scale. When CPIGH researchers surveyed officials in 28 low- and middle-income countries during the first half of 2021, the majority – including nearly all of those working in sub-Saharan Africa – expressed concern about their countries’ readiness to deliver vaccines to far-flung populations. Most respondents from African countries reported major financing shortfalls beyond what they had already budgeted. Ensuring cold storage, tracking and monitoring vaccinations, and the cost of COVID vaccination drives were not far behind on their list of worries.

“Many of the challenges are reflective of issues with their health systems more generally,” says Ipchita Bharali, a policy associate who led the survey. “Domestic financing is already very low in some of these countries, adding to the financial and logistical challenges of procuring, storing and administering the vaccines. Longer-term investments in financing capacity and health infrastructure are needed to strengthen overall health systems.”

How ready are countries for COVID-19...

Mark McClellan, M.D., Ph.D., director of the Duke-Margolis Center for Health Policy, says the unprecedented scale of COVID-19 vaccinations demands a level of global cooperation that extends beyond vaccine donations.

“Without greater clarity and transparency about countries’ needs – as well as focused, urgent and coordinated support to address them – the growing supply of vaccines won’t translate into higher vaccination rates,” he says.

Together with DGHI, Duke’s Global Health Innovation Center and the COVID Collaborative, McClellan’s center recently launched an initiative to jump-start assistance to low- and middle-income countries. Called COVID GAP, short for the COVID-19 Global Accountability Platform, the project aims to hold wealthy countries’ feet to the fire on promised vaccine deliveries and provide strategies and support to get vaccines more quickly from airports to the arms of residents.

Duke researchers are also working to connect low- and middle-income countries with tools and external resources to navigate weak links in their supply chains. That includes helping countries make the case for greater investments in infrastructure and staffing, as well as increasing regional production of vaccines.

“We are hoping to identify the problems that both the countries themselves and external partners need to work together to overcome,” says Bharali.

Meanwhile, another CPIGH research project is showing that those barriers to vaccine uptake are not necessarily the same across borders – or even time. Wenhui Mao has been studying the vaccine distribution efforts in Ghana and three other countries – India, Peru and the Sudan – to understand the main impediments in each country.

While Ghana and the Sudan have been significantly hampered by the inability to acquire enough vaccines, for example, supply is no longer a major roadblock in India, which has extensive capacity to produce vaccines in its own manufacturing facilities. But the country’s distribution channels have not kept pace, Mao says, and to date just 25% of India’s 1.4 billion residents have been fully vaccinated.

In India’s case, ramping up vaccine production may be counterproductive without first improving its infrastructure for getting vaccines out to communities, Mao says. “The supply chain is much lower capacity, and so the vaccines may be wasted because they can’t reach the population.”

She says understanding its maximum distribution capacity also can help India determine how many vaccines it can ship out to other countries that are desperately waiting for them.

In other countries, the biggest obstacles may not be in getting vaccines to people, but getting people to vaccines.

Mao cites Peru, which in many ways has been an exemplar of proactive vaccine planning. The country negotiated direct purchase deals with vaccine manufacturers in China and Russia, and deployed solar-powered refrigerators to ensure cold storage to its many off-the-grid regions. Those steps enabled Peru to fully vaccinate nearly half its population by the end of October.

While vaccine supply remains an issue, Peru’s biggest challenge now may be in convincing those who remain uncertain about getting the shots.

“We know from experience here in the U.S. that once you have abundant supply, that’s when you start to see vaccine hesitancy come to the forefront, because you’ve already vaccinated all the people who really want to be vaccinated,” says Lavanya Vasudevan, Ph.D., an assistant professor of family medicine and community health who consulted on Mao’s research. “And so the question becomes, what strategies can you use to get to people who are still hesitant?”

Vasudevan, a DGHI faculty member who has studied vaccine hesitancy in several countries, says the decision to refuse or delay vaccination often hinges on three Cs: convenience, confidence and complacency.

Ensuring vaccines are convenient will be daunting for countries with large rural and hard-to-reach populations, Vasudevan says. “It’s not just about getting vaccines to those settings, but about making sure people can get to the health facilities to receive the vaccines, and that there are vaccines available when they show up.” She points out, for example, that vaccinators may be restricted from opening a multidose vial unless there are enough people present to use all the shots.

But those countries also have work to do to address issues with confidence and complacency, she says.

One example is Tanzania, where Vasudevan has studied delays in childhood immunizations. With a median age of just 18, Tanzania has a huge population of youth who may underestimate the risks of developing serious illness from COVID-19 and lack motivation to seek out vaccines. And the popularity of group messaging platforms like WhatsApp fuels rapid spread of misconceptions and misinformation about the disease and vaccines that is hard to correct.

That means while countries like Tanzania may not yet have enough vaccines for hesitancy to show up as a limiting factor, the seeds of the problem are being planted now.

“It’s definitely important to be proactive in addressing vaccine hesitancy,” Vasudevan says. “I think those countries should not be waiting until they hit that wall. They should be working now to promote the importance of the vaccine and its safety and efficacy.”

Not a One-Time Situation

All of the research offers a stark reminder that, for much of the world, the heavy lifting to end the pandemic is just beginning. And the countries with the most work to do are having to rely on health systems that have been battered by 18 months of fighting the virus with virtually no access to vaccine protection.

In the face of such an extraordinary crisis, many countries are finding innovative ways to stretch resources and confront logistical hurdles. But heat-of-the-moment ingenuity – like Ghana’s drones – is only going to carry them so far.

Mao points to the fact that many countries have had to shift staff and resources away from other health interventions, including routine immunizations, to gear up for the size and scale of COVID-19 vaccination campaigns.

“That’s not always a good idea,” she says. “Those diseases matter to people’s health, as well. It’s important to respond to the pandemic, but we have to learn lessons and allocate resources wisely to prepare health systems for future pandemics.”

“I think one of the most important lessons here is to invest in health systems because this is not necessarily a one-time situation,” adds Ipchita Bharali. “Pandemic preparedness needs to be much better integrated into health systems more generally. The more sustainable you make the effort, the easier it becomes to do this in a routine way and minimize the shock to the system.”