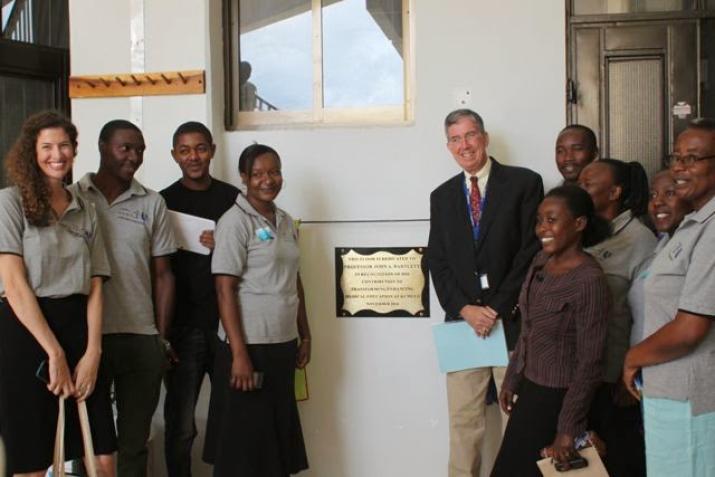 On Friday morning, officials at Kilimanjaro Christian Medical University College (KCMU College) in Moshi, Tanzania, dedicated the third floor to DGHI Associate Director for Research, John Bartlett. Among those who prepared words of gratitude to Bartlett was Ahaz Kulanga, the deputy vice provost, Bishop Shao, the Chair of the Board of Trustees, and members of the KCMC-Duke Medical Education Partnership Initiative (MEPI). Members of the KCMC Board of Trustees and the Kilimanjaro Christian Medical Centre (KCMC) leadership were also in attendance. Speakers at the event commemorated Bartlett’s dedication to KCMC with a plaque on the third floor and a cane to symbolize his wisdom and the respect his Tanzanian colleagues have for him.

Over the past 13 years, Bartlett has worked alongside Tanzanian colleagues to transform the way education is delivered in Tanzania and establish collaborations between KCMC and Duke University. He has shown his dedication to KCMC as a professor of medicine and collaborative partner throughout the changing leadership of KCMC. During this time, he has received numerous teaching awards from Duke University and KCMC.

“I am delighted that John has been recognized for his many years of work and dedication to improving the health of the Tanzanian people,” said Michael Merson, DGHI director. “He and his colleagues have truly laid the foundation for the a thriving health care system in Tanzania.”

Bartlett’s continued dedication to this college has allowed him to become a respected peer of KCMU College faculty, mentor to students, and accepted member of the Moshi community. His ongoing capacity-building work and commitment to KCMC has allowed it to thrive and become one of DGHI’s Priority Partnership Locations.

Since the creation of the medical college in 1997, more than 500 medical students have graduated from KCMU College and they serve their country as care providers, academicians, mentors, and research scientists. In fact, the reach of KCMC stretches far beyond its walls to remote villages in Tanzania and all the way to Duke University. This year’s entering class of medical students includes 179 members, and KCMU College has the highest qualifying scores of any medical school in Tanzania.

Four years ago, Bartlett’s primary focus in Tanzania shifted from research collaborations to capacity building in education. The third floor of the KCMU College Building, now named in his honor, houses the student computer laboratory, the faculty computer laboratory, the videoconferencing facility, and the e-Library. In 2010, KCMC a received a five-year, $10 million grant from PEPFAR, Fogarty International Center and Health Resources and Services Administration to work with Duke University and establish the Medical Education Partnership Initiative. This grant recognizes the success of the existing partnership and supports continued collaboration to train new generations of Tanzanian physicians. Bartlett and Professor Kien Mteta are co-principal investigators of the project.

Throughout the time Bartlett has been a Duke collaborative partner in Moshi, Bartlett and the KCMC doctors have published many scientific manuscripts, contributing to greater understanding of health problems with local relevance.  The researchers and medical faculty at KCMC have grown under Bartlett’s mentorship, resulting in new generations of researchers who are taking the lead on grants based in Tanzania.