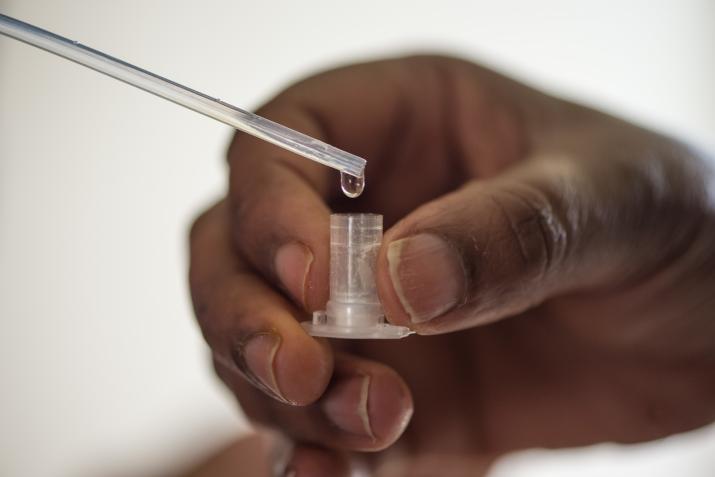 A home lead test can reveal risks of lead exposure, one factor researchers say may contribute to lower-than-expected test scores among children. Photo by Barbara Johnston, courtesy of the University of Notre Dame.

Black children who have been exposed to the metal lead have lower test scores than their peers, and this effect is exacerbated for those who live in racially segregated neighborhoods, according to research led by a Duke environmental epidemiologist.

The findings appear the week of August 15 in the Proceedings of the National Academy of Sciences.

“Our study concluded that it’s not just about where lead exposure is highest -- that’s just one piece of the puzzle,” said Mercedes A. Bravo, PhD, assistant research professor at the Duke Global Health Institute and first author on the paper.

“Black children are more likely to be exposed to lead and are also more likely to live in racially segregated, predominantly Black neighborhoods,” Bravo said. “When these two exposures co-occur, children had worse than expected scores.”

Understanding how structural racism and environmental contamination, such as lead exposure, can combine to affect children’s health and development can help researchers, community stakeholders and public health departments identify and target the most vulnerable individuals and communities, Bravo explained.

Lead is a toxin that has been linked to cognitive and neurodevelopmental disorders in children. Although high levels of lead are unhealthy for children in general, structural racism may amplify the negative cognitive impacts of the lead exposure considerably, said Marie Lynn Miranda, PhD, senior author on the paper and director of the Children’s Environmental Health Initiative at the University of Notre Dame. Miranda is also an adjunct Professor of Pediatrics at Duke and was a longtime Duke faculty member.

“In the midst of our country’s racial reckoning, we must think more about and ultimately act on the deep effects that environmental justice and structural racism have on our country and our communities,” said Miranda. “This paper tackles both issues head on by showing that a clear issue of environmental justice (childhood lead exposure) is further compounded by the structural racism that Black families in particular face in the United States, as demonstrated through racial residential segregation.”

Identifying the mix of social, environmental and economic factors that create health disparities could lead to earlier intervention in vulnerable communities, thus narrowing the “achievement gap” that becomes apparent in early childhood and persists or widens with time. This gap results in lower high school and college graduation rates among children who belong to racial and ethnic minority groups, the authors explain in the paper.

In North Carolina, children are most often exposed to high levels of lead through lead-based paint found in older homes. Other possible exposure sources are lead pipes, fittings, and solder in older houses and living near polluting sources or industries, such as airports, said Bravo. Racially segregated neighborhoods may be more likely to have one or more of these factors at play.

Although lead-based paint was banned in 1978, homes built prior to that time may still expose children in their own homes, explained Bravo, especially if the home has not been significantly renovated using lead-safe practices.

“Even if the home has been re-painted, chips and dust from the lead paint end up on the floor and window sills in the home or in the soil outside the home,” said Bravo. “Young kids often have a lot of hand-to-mouth behavior and spend time on the floor in their homes. Unfortunately, lead based paint may taste good – it is said to taste sweet -- which does not help in keeping kids away from the substance.”

Pipes that carry drinking water to the home may also contain lead, particularly if the pipes were made prior to 1986. When communities fail to replace these aging pipes at the appropriate time, health disasters can ensue like the Flint, Michigan crisis that was discovered in 2014.

Lastly, living near an airport can place children at higher risk for lead poisoning due to the leaded gas found in aviation fuel. Though the use of leaded gasoline in most motor vehicles was banned 25 years ago, leaded aviation fuel is still used because a safer alternative has not yet been developed, according to the U.S Federal Aviation Administration.

“This study reminds us that there is an enduring legacy of structural racism and environmental injustice that may be systematically disadvantaging specific groups and communities of children,” Bravo said. “Taking a more holistic approach to examining what children are exposed to in their physical and social environments is critical to addressing health disparities and advancing health equity.”

Bravo came to Duke after working on the Children's Environmental Health Initiative with RTI International. In 2022, she was named a Whitehead Scholar, which supports promising biomedical researchers in the Duke School of Medicine.